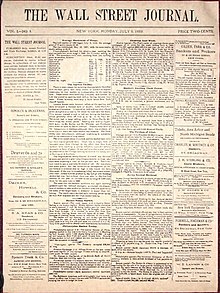 The Wall Street Journal was founded on July 8, 1889 by Charles Dow , Edward Davis Jones, and Charles Bergstresser and has been published without interruption ever since. The newspaper mainly reports on international economic and financial topics, with an emphasis on the USA . The name refers to Wall Street , a street in the financial district of New York City and the seat of the New York Stock Exchange . The newspaper had won a Pulitzer Prize a total of 35 times by 2013 .

On June 28, 2007, around 200 of the 700 journalists from the Wall Street Journal turned up for work to protest the May 2, 2007 takeover bid made by media entrepreneur Rupert Murdoch . From May 2, 2007, Murdoch conducted negotiations with the owners of the Dow Jones publishing house. While the extremely generous takeover offer of $ 60 per share was initially skeptical, the members of the Bancroft family ultimately agreed to sell their majority stake. So far, the Bancroft family holds 60 percent of WSJ shares. With the agreement with media entrepreneur Rupert Murdoch on August 1, 2007, the newspaper publisher became the property of Murdoch's media group News Corporation for a takeover price of around $ 5 billion . According to editor L. Gordon Crovitz, Murdoch is said to have promised not to want to shake the extensive editorial freedoms of the paper. However, commentators have since expressed doubts about the newspaper's independence from Murdoch's corporation.

Since January 10, 2012, the Wall Street Journal has also appeared in a German-language edition; but exclusively online. The news was written by the journalists of the German Dow Jones offshoot and edited by a small WSJ editorial team in Frankfurt am Main. The complete issue was only available as a paid subscription.

The average circulation in 2019 was just over a million copies including online subscriptions. The newspaper with the highest circulation in the USA for many years now lost its leading position in the newspaper market to USA Today , but was able to overtake the competitor in terms of circulation again from autumn 2009 before it had to give up the place again in 2019.

According to reports from the British newspaper The Guardian , the Wall Street Journal has artificially increased its circulation figures using unclean methods.

The WSJ is the only newspaper in the USA that distributes its content on the Internet almost exclusively for a fee. The newspaper currently has around one million online subscribers who pay $ 75 a year for access. The new majority owner Rupert Murdoch had initially indicated that the online version would be made freely accessible in the future and financed through advertisements, but later wanted to continue to offer certain categories for a fee.

The Wall Street Journal is the mandatory publication of the US stock exchanges.

The readers of the Wall Street Journal are among 60% of the higher management to have an average income of 191,000 US dollars , an average net worth in the household of 2.1 million US dollars and are 55 years old on average.

The newspaper is considered to be an influential forum for the organized climate denial movement , which often lets people speak who deny man-made climate change . According to a study published in 2015, the WSJ was the leading US newspaper that reported the least about the negative effects of global warming . At the same time, she reported the most negatively about climate policy and climate protection measures . A study published in 2016 came to the conclusion that only 14% of the 279 guest articles that have appeared on the topic of climate change since 1995 reflected the consensus opinion in climate research. In addition, not a single one of 201 editorials recognized the fact that global warming is due to the burning of fossil fuels .

As a specialty among the major newspapers, the Wall Street Journal uses a drawing technique called hedcut instead of photos . These are artistic drawings that are composed of dots to create a picture ( cf. the wood engraving technique that was common up until the 1890s ).

The Wall Street Journal has an average of 96 pages and is divided into several content parts: