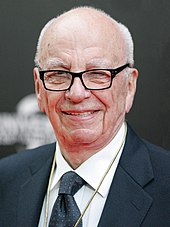 Keith Rupert Murdoch (born March 11, 1931 in Melbourne , Victoria , Australia ) is an American media entrepreneur of Australian origin. He was the founder, chairman and CEO of News Corporation and is currently Executive Chairman of News Corp and Fox Corporation .

Starting with a newspaper in Adelaide , Murdoch bought and established other publications in Australia and then expanded its presence to the UK , US and some Asian markets. Murdoch's first sustained investment in the television market was in the UK in 1989 when he acquired Sky Channel . During the 2000s, he expanded his sphere of influence in satellite television, the film industry, and the Internet.

In 2006 it was estimated that around 2 percent of the media distributed globally were under his influence. Murdoch was ranked 4th on Forbes Magazine's Most Commercially Successful Media Entrepreneurs ranking in 2006 .

The grandson of the theologian Patrick John Murdoch and son of Keith and Elisabeth Murdoch sr., Geb. Greene, visited the boarding school Geelong Grammar School in Australia and then studied at Worcester College at the University of Oxford in England philosophy , politics and economics . During this time Murdoch was a supporter of the British Labor Party . After the sudden death of his father, the 22-year-old returned to Australia and took over the management of his father's media company , which at the time consisted of two Adelaide newspapers (including The News ) and a radio station.

Murdoch quickly expanded its market presence beyond its home country. He bought the Sunday Times and made it a successful tabloid. During the next few years Murdoch was able to acquire additional, mainly regional newspapers, magazines and television stations. His first foray outside Australia was the purchase of New Zealand's daily newspaper The Dominion in 1964. Later that year, Murdoch founded the first Australian newspaper with national distribution, the Australian . After increasing his share of the Australian market, Murdoch turned his attention to the UK. His biggest purchase until 1968 was the News of the World , the Sunday tabloid with the greatest circulation. Other popular newspapers such as The Sun and The Times followed . The News Corporation is a global media group that has numerous interests in film and television companies, newspaper and book publishers and even a baseball team ( Los Angeles Dodgers ). The heart of this media empire are u. a. the Hollywood film studio 20th Century Fox and the American television network Fox Broadcasting Company , which the Australian Murdoch was only able to set up in 1985 after he had obtained US citizenship. In 1989 he gained a foothold in the European media market with the establishment of British Sky Broadcasting . Murdoch is represented in the Asian market with STAR TV , which has more than 100 million viewers every day.

In 2005, Murdoch bought for 580 million dollars Myspace and sold the social network in 2011 for 35 million dollars. On August 1, 2007, after months of negotiations, Murdoch was also able to take over the well-known US publisher Dow Jones , which includes the world-famous Wall Street Journal . On December 7, 2007, it was announced that Murdoch's son James was taking over the post of chief of his father's media empire in Europe and Asia .

Murdoch discontinued News of the World on July 10, 2011 following a wiretapping scandal . A few days later he also withdrew the takeover offer for the television broadcaster BSkyB , in which the News Corporation holds 39.1 percent of the shares.

On July 19, 2011, Murdoch and his son were questioned before a House of Commons investigative committee into the wiretapping scandal. Murdoch said it was a day of the greatest humility in his life.

Rupert Murdoch is known for his Zionist attitude , which is also reflected in his media coverage.

In a speech to the Anti-Defamation League in January 2010 Murdoch called for a more decisive support of Israel by the United States .

Rupert Murdoch is a knight of the Papal Order of Gregory . 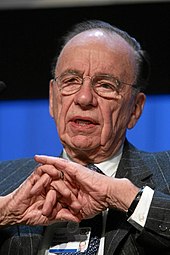 On January 26, 2007, Murdoch publicly admitted in an interview at the World Economic Forum in Davos that he had actively tried to influence public opinion in favor of George W. Bush's Middle East policy.

Murdoch supported the “ Brexit ” campaign in 2016 in particular through his British tabloid The Sun.

Jeffrey Archer uses Murdoch's years of power struggle with Robert Maxwell to own the largest media empire in the world as a template for his novel "Imperium". According to the writer, 78 percent of this is based on facts.

According to critics, Rupert Murdoch uses the media he owns to spread conservative beliefs , but his media supported the course of the Blair administration after the fall of the Conservatives in Britain . Among other things, he is accused of having adopted a Eurosceptic and anti-French attitude in the run-up to the Iraq war , Fox TV and around 175 News Corporation newspapers . His newspapers “ The Sun ” and the 2011 “ News of the World ” in Great Britain are or were known for their anti- EU and anti-German stance. Fox TV has repeatedly been accused of excessive patriotism and one-sided partisanship in favor of the Bush administration .

The criticism of Murdoch's media power has been growing lately. Avaaz takes numerous actions against Murdoch's "stranglehold on the British press" in the name of freedom of expression and freedom of the press. In 2004 the FOX and Murdoch-critical documentation " outfoxed " appeared, in which, among other things, an ex-FOX News employee revealed that the FOX News editors were given a daily memo from the station management that contained the topics that should be treated that day. The accusation of partisan and unobjective journalism was supplemented by the accusation that the Bush administration was intensely supported and that news about the Iraq war, for example, was always covered up. For example, after every report of the death of US soldiers, it was pointed out that the US army had to fulfill an important mission in Iraq, namely fighting international terrorism, and after the attack on the World Trade Center on Sept. September 2001 had to prevent further terrorist activities .

According to a survey, a large percentage of the FOX viewers - contrary to the actual facts - were certain that Iraq really had weapons of mass destruction . In other contexts too, be they political, economic or social, Murdoch is said to have interfered more and more and influenced the news in his favor. During Barack Obama's tenure , the White House found itself in an open dispute with US news broadcaster Fox News, which was trying to discredit Obama more and more by calling him a communist, Muslim, racist and not in Born in the USA. 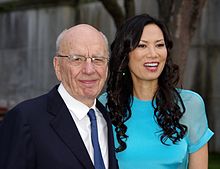 Rupert Murdoch and his then wife Wendi (2011)

Rupert Murdoch was first married to Patricia Booker. His second wife was Anna Murdoch Mann . After 32 years of marriage, he divorced her in 1999. Anna Tõrv received a severance payment of $ 1.2 billion; thus it was the most expensive divorce until Jeff and McKenzie Bezos ever consummated. Shortly thereafter, he married the 38 years younger Chinese Wendi Deng , from whom he divorced in 2014. In 2016 Murdoch announced his engagement to Jerry Hall , whom he married on March 4, 2016 in London .

Rupert Murdoch is a multi-billionaire. According to the Forbes 2017 list , his net worth is approximately $ 12.8 billion. This puts him at number 90 on Forbes' list of the richest people in the world.