The title of this article is ambiguous. Further meanings are listed under Robert Maxwell (disambiguation) . 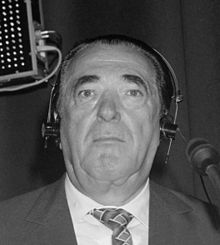 Robert Maxwell was born as Ján Ludvík Hyman Binyamin Hoch in the Carpathian-Ukrainian village Slatinské Doly, which today belongs to the Ukraine, in poor circumstances as the son of Jewish Orthodox parents. In 1939 the area was occupied by Hungary . Much of the family was killed in the Holocaust . Maxwell came to Great Britain in 1940 as a 17-year-old refugee .

As a member of the Royal Pioneer Corps , from 1943 of the North Staffordshire Regiment, he took part in the Second World War and was promoted to captain in 1945. In the post-war period he worked as a press officer for the British military government in occupied Berlin. There he was able to establish contacts with the science publisher Julius Springer . In 1951 he acquired three quarters of the Butterworth-Springer-Verlag, which was to use the methods of the Springer Verlag in Great Britain under the name Pergamon Press . Maxwell built Pergamon Press into a scientific publishing empire. He was also known as the "Press Czar": Among other things, he owned several of the highest-circulation British newspapers, including the Daily Mirror .

From the 1970s onwards, Maxwell was involved in several legal disputes. He was considered eccentric. In 1988 he bought the British publisher Macmillan, Inc. for $ 2.6 billion. In 1990 he took over the New York newspaper Daily News and founded the weekly newspaper The European . At the same time he invested in Eastern Europe during the fall of the Wall. Maxwell's media group, which was called Maxwell Communication Corporation (MCC) since 1987, had reached its greatest expansion. In doing so, however, he was heavily in debt. He had to sell Pergamon Press and Maxwell Directories to Elsevier in 1991 for £ 440 million in order to service current loans.

Robert Maxwell disappeared in 1991 in an unexplained manner naked from the yacht Lady Ghislaine, named after his ninth child , in calm water. His body was recovered from the sea near Tenerife . Because Maxwell had returned to his Jewish roots in his final years, he was buried on the Mount of Olives in Jerusalem . Shortly before Maxwell's death, journalist Seymour Hersh had alleged contacts with the Israeli secret service Mossad in connection with the Israeli nuclear program , which Maxwell denied.

Soon after his death, it became known that Maxwell had falsified balance sheets and stolen his employees' pension fund. The indebtedness of his group was put at around 3 billion pounds (around 3.354 billion euros) at the end of 1991. Two of his nine children were arrested in 1992 for the pension fund affair and charged with conspiracy to commit fraud, but were acquitted in 1996. After Maxwell's death several biographies appeared, the publication of which he had always prevented during his lifetime.

Jeffrey Archer used Maxwell's years of power struggle with Rupert Murdoch to own the largest media empire in the world as a template for his novel Imperium . According to the writer, 78 percent of this is based on facts.