Maxwell was born on December 25, 1961 in Maisons-Laffitte, France, as the ninth child of Elisabeth Meynard, a French-born Holocaust researcher , and the publisher Robert Maxwell . She grew up in Headington Hill, England, near Oxford . There she attended the girls' school and later the Balliol College .

As the youngest child, Maxwell had a special relationship with her famous father. She founded a kit-kat club in London and was director of the football club when her father owned Oxford United . She also worked for European , a weekly newspaper her father founded. 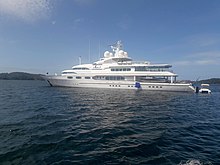 When Robert Maxwell was found dead near Tenerife in November 1991 , she was on board his yacht, Lady Ghislaine , which was then named after her . To this day she denies that her father died of drowning in suicide , but claims that he was murdered. After the death of her father, his media empire collapsed. At the end of 1991 the group's indebtedness was put at three billion pounds sterling .

After 1991 she moved to the United States. She moved to New York City and met investment banker Jeffrey Epstein there. She rose in New York society and cultivated relationships with celebrities. In New York she worked briefly for a housing company. One of the promotional products company she founded was unprofitable and had to close.

In the course of the allegations against Epstein of having founded a child abuse ring, she was accused of tolerating and supporting the machinations of Epstein. She worked as Epstein's pimp by choosing girls for him and training them for sexual intercourse . Maxwell is also charged with sexually abusing 16-year-old Annie Farmer herself in 1996. She denies this as well as knowledge of Epstein's illegal activities.

Virginia Roberts Giuffre led a civil case for defamation against Maxwell, who in 2015 became public. She claimed Maxwell recruited her for Epstein in 1999 and subsequently engaged in sexual acts several times after they met at the Mar-a-Lago resort , which Maxwell denied. She described the allegations as "blatant lies," which led to the trial. In 2017 there was a settlement between the parties that included several million US dollars in payments to Giuffre. A variety of other lawsuits were brought against Maxwell.

At the end of July 2020, some of the documents from Virginia Roberts Giuffre's confidential civil lawsuit against Maxwell were published with court approval. They reveal a number of allegations about Maxwell's role in the allegations against Epstein. Accordingly, Giuffre also claimed to have been trained as a "sex slave" by Maxwell. Statements made by Maxwell there, which also affect her own sex life, were only published after the conclusion of an appeal process initiated by Maxwell's attorneys, but unsuccessful, at the end of October 2020.

After Epstein's alleged suicide while in custody in August 2019, Maxwell's whereabouts were unknown. Following a January 2020 court hearing in Manhattan District Court on a dispute with Virginia Roberts Giuffre over document disclosure, Maxwell's attorney said she did not know where her client was.

In March 2020, Maxwell sued Epstein's estate for reimbursement of security services and legal proceedings because Epstein assured her in 2004 that she would always be financially supportive. Darren Indyke, an ex-lawyer and executor of Epstein's will , reassured her after his death that she would get the money. Several lawyers for the alleged victims of Epstein were outraged by the lawsuit and demanded that the money be due to their clients.

On July 2, 2020, the FBI arrested Maxwell in a remote wooded area near Bradford , New Hampshire . There she had acquired a million dollar property with surrounding 63 hectares of land through the anonymized LLC Granite Reality in December 2019 and hid there for eight months. The investigators also assigned about 15 bank accounts to Maxwell, on which up to 20 million US dollars have been deposited since 2016. The FBI said they knew Maxwell was in New Hampshire but waited for the indictment to arrest her.

In the indictment, the Attorney for Manhattan Maxwell are mainly accused of sexual offenses in cooperation with Epstein in six points, including seduction of minors and trafficking of children between 1994 and 2004. She is accused of recruiting minors for sexual acts with Epstein. In addition, the public prosecutor's office accuses her of lying under oath twice in 2016 .

When the grand jury filed a lawsuit against Maxwell, New York District Attorney Audrey Strauss stated that the allegations against Maxwell relate to the years 1994 to 1997.

At the end of March 2021, the complaint was extended to include further allegations and the period of the offense to 1994 to 2004.

Prosecutors urged Maxwell to be arrested before trial, arguing that her substantial financial resources and the possibility of a decade-long prison term posed an extreme risk of escape: "In short, Maxwell has three passports, large sums of money, extensive international connections, and absolute no reason to stay in the United States and face a long jail sentence. ”The prosecution's motion was granted at the first court hearing Maxwell pleaded not guilty to. She was detained at the Metropolitan Detention Center (MDC) in Brooklyn , New York until the trial began on July 12, 2021 .

In early December 2020, Maxwell asked the court for a second bail hearing. The application calls for house arrest instead of pre-trial detention . A deposit of $ 28.5 million was proposed for this. Maxwell would also waive her right to challenge extradition in both the UK and France, where she is a national. On December 28, 2020, Judge Alison Nathan denied Maxwell's attorney Bobbi C. Sternheim's petition for bail hearing.

Maxwell is isolated from the other inmates at the MDC for her own "safety and that of the proper functioning of the facility," according to prosecutors. She is therefore in her cell 21 hours a day. Maxwell is also monitored around the clock by prison staff to prevent attempted suicide. Numerous body scans are also carried out on her. Her lawyers filed an unsuccessful complaint against these MDC measures in August 2020. However, instead of the usual three hours a day, Maxwell 13 was allowed to view materials for their criminal trial. In November 2021, Maxwell's relatives filed a complaint with the United Nations through human rights lawyers that they believed the conditions of detention (which were "unsanitary" and "inhuman") violated the presumption of innocence . The lawyers questioned that the trial would be fair. They argued that due to the widespread coverage of the case, a prejudice had already taken place in the US public.

On December 29, 2021, Maxwell was found guilty on five out of six counts. The judge will announce the amount of the penalty at a later date. One of the lawyers announced that they would appeal the verdict .