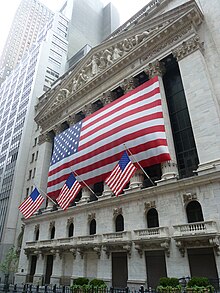 The Wall Street (dt. Wall street ) is a street in New York City District Manhattan in which numerous banks and the world's largest stock exchange , the New York Stock Exchange , are located.

History of the road

In 1647 the Dutch West India Company decided to bring order to the city of Nieuw Amsterdam . Petrus Stuyvesant was to take on this task . During his 17 year tenure as governor, the first hospital , prison, and school were built. To protect against Indian raids , in 1652 he had a wall built across the island in the north of the city , which later gave its name to the street that ran there. The first slave market in New York was located on Wall Street from 1711 .

The approximately 800 meter long street forms the center of the New York financial district . At the same time, the term Wall Street is used to describe the US financial industry as a whole.

At the end of the street is the famous Trinity Church . The Federal Hall , in which the first Congress met and where, among other things, the Bill of Rights was passed , commemorates the time when New York City was the capital of the USA .