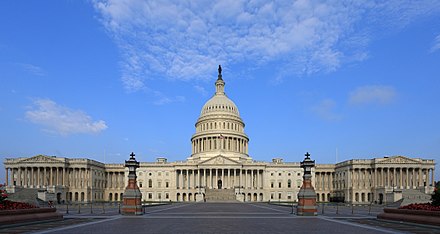 Each state sends two senators to the Senate , regardless of its population . These 100 people have been directly elected by the electorate in their state for six years since 1913. Until 1913 they were sent to Washington by the parliaments of the individual states. A third of the senators are elected every two years.

The House of Representatives consists of 435 directly elected and voting MPs . There are also six delegates from the District of Columbia , Puerto Rico , American Samoa , Guam , the Northern Mariana Islands and the US Virgin Islands ; however, they are only entitled to vote in committees. The number of representatives a state sends is determined by its population. A census takes place every ten years , according to which the number of seats in each state is re-determined. Today there is one representative for every 700,000 inhabitants; each state has at least one representative. The legislative period is two years.

Elections to the Congress always take place on the Tuesday after the first Monday in November ( Election Day ) of every even year. Every four years they take place on the same day as the presidential election. Elections without the election of the president are called midterm elections . In many states, governors , ministers, the respective state parliaments and local officials are elected and referendums are held at the same time . The constitution of the new congress always takes place on January 3rd after the election.

The President of the United States and his ministers do not have the right to attend sessions of Congress and to speak; therefore no seats are provided for them.

The main tasks of the Congress are

In principle, the two chambers meet separately. With a few exceptions, resolutions must be passed by both chambers in unison, whereby the president has a veto , which can be overruled with high hurdles. For ceremonial occasions, such as the President's annual State of the Nation ( State of the Union ) , the official counting of electoral votes and speeches of selected state guests, the chambers to a joint session (occur joint session ) together.

The forerunner of today's Congress was the Continental Congress , which consisted of delegates from the 13 colonies of North America . Since the Continental Congress met between 1774 and 1789, its founding immediately preceded the War of Independence . Since the US Constitution came into force on March 4, 1789, Congress has consisted of two chambers, the Senate and the House of Representatives . Originally New York City was the capital, but from December 6, 1790 to May 14, 1800, the Congress Hall in Philadelphia served as the seat of Congress.

The building, which was built in 1793, was set on fire by British troops in the course of the British-American War on August 24, 1814 , but was restored by 1823. The building, which was extensively expanded from 1851 to 1863, has since consisted of a rotunda with a dome, to which the two parliamentary wings adjoin. Several extensions were built in the 20th century. On December 2, 2008, the new United States Capitol Visitor Center also opened .

The Capitol is 229 meters long, up to 107 meters wide and 88 meters high at its highest point. The Capitol was the first major structure in Washington, DC, after the White House , around which the city was built. Directly around the Capitol is the Capitol Complex , which includes the Library of Congress and the Supreme Court buildings .

In the 19th century, different majorities often prevailed in the House of Representatives than in the Senate on issues that were assessed differently from region to region. Because of the larger population in the northern states , they outnumbered the southern states in the House of Representatives . In the Senate, however, with its equal representation of the states, there was no comparable dominance of the North. Repeated conflicts between the two houses arose, for example, on the subject of slavery . The differences of opinion lasted until they escalated in the civil war (1861–1865). During the tenure of Republican Thomas Brackett Reed as Speaker of the House of Representatives , the speaker's powers were significantly increased. The fact that since the 17th Amendment to the Constitution of 1913 not only the members of the House of Representatives have been directly elected, but also the senators, also plays an important role in political practice . In the 1970s, reforms strengthened the powers of subcommittees, while committee chairmen lost their power and could now be appointed by party leaders.

During the storming of the Capitol on the afternoon of January 6, 2021, the congress building was forcibly stormed by supporters of the elected US President Donald Trump . Their goal was to prevent the formal confirmation of the result of the 2020 presidential election .

Bills introduced into Congress are first discussed and voted on by the committees and then the plenary session of the Senate or the House of Representatives and then passed on to the other chamber. If the resolutions differ, an adjustment can take place in the Conference Committee , a kind of mediation committee. This committee is not a permanent body, but is reappointed each time to deal with controversial bills. The president has to sign laws for them to come into effect. If the president does not sign or if he expressly vetoed him, the Congress can overrule him with a two-thirds majority in both chambers.

The president, who has very far-reaching powers, can be controlled in particular through legislation and his power limited. The War Powers Resolution is an illuminating example of this, since the constitution stipulates that the president is in command of the armed forces, but only Congress can declare war.

The powers of the Congress are set out in Article 1 (in particular Article 1, Section 8) of the Constitution. These responsibilities have been expanded when the Civil War Constitutional Amendment ( 13th , 14th, and 15th Amendment , which directly mandates Congress to implement the respective provisions contained in the amendments ) and the 16th Amendment , which governs federal income tax , came into force.

Other sections of the constitution - notably Article 1, Section 9, and the first ten amendments (commonly known as the Bill of Rights ) - curtail the power of Congress.

The general responsibilities of the Congress include:

Some of these responsibilities are now obsolete but remain in force.

The 10th Amendment limits the powers of Congress by making it clear that areas of law that have not been delegated to the federal government remain with the people and the states.

The constitution explicitly reserves the right to allocate budget funds to the Congress , which ultimately allows it to set political priorities. The Budget and Impoundment Control Act of 1974 put an end to the hitherto common practice of circumventing budget law by not spending released funds.

As in all countries of British parliamentary tradition, budgetary and tax laws can only be introduced in the House of Commons.

Control of the executive branch

Control of the executive is arguably the most time consuming task of Congress. On the one hand, Congress can through laws such as B. the War Powers Resolution or the Budget and Impoundment Control Act do justice to this task, on the other hand also through committees that are allowed to question politicians of the executive branch. It is possible that each committee can be transformed into a committee of inquiry. It is also possible to set up special committees of inquiry. Committees of inquiry have similar options to the courts: They can summon and interrogate witnesses, demand that the authorities hand over documents and impose penalties for disregarding Congress if they refuse to testify. Due to executive privilege , the Congress has no access to the President and his staff in the Executive Office . In order to ensure optimal control, the Congress has built up its own administrative apparatus parallel to the executive, which includes scientific services and investigative authorities. This includes, inter alia. the Government Accountability Office , which oversees the budget and compliance with it.

The Congress also has exclusive jurisdiction in the impeachment trial ( impeachment ) of public officials of the Federation (President, Ministers, judges, etc.). The House of Representatives will bring charges and the Senate will meet as a "court".

In a broader sense, the Senate's approval requirement for the President to appoint high-ranking officials and judges can also be counted among the rights of control.

Both chambers of the Congress have long been characterized by stability through long-term mandates. The re-election rate of mandate holders is high, especially in the House of Representatives with mostly over 90 percent, which is why there is talk of congressional stagnation and many elections in congressional constituencies take place without actual competition. However, 29 senators resigned between 2008 and 2010, with a combined total of 557 years of Senate experience. In 2019, a maximum of 45 members of the Senate will have already belonged to it before 2011, in the House of Representatives there will be a maximum of 160 (around a third). At the same time, after a phase of relatively large moderation in the middle of the 20th century, the polarization between the two major parties has grown significantly since the 1980s and reached a historically high level in the 2010s - although some compared it to the situation at the turn of the 20th century. Stand, which made the non-partisan cooperation in both chambers increasingly difficult. Some experts explain the exceptional situation in the middle of the 20th century with the wide ideological spectrum within the two big parties, which in the southern states represented different values ​​than their party colleagues in the rest of the country (see Solid South ).

Shirley Chisholm from New York was the first African-American woman to be elected to Congress in 1969; it was not until 1989 that the first Latin American Ileana Ros-Lehtinen from Cuba in Florida succeeded in doing so .