110th Congress of the United States

The Capitol , seat of Congress in Washington, DC

The 110th Congress of the United States , consisting of the House and Senate , was the legislature of the United States . Its legislative period lasted from January 4, 2007 to January 3, 2009. The distribution of the seats in the House of Representatives to the individual states was based on the 2000 census .

All 435 House Representatives and 33 Senators ( Class I ) were elected in the November 7, 2006 congressional elections. The Democrats achieved a majority in both houses for the first time since 1995 - while the President of the United States, George W. Bush , who was in office until January 2009 , belonged to the Republican Party . The Congress met in the American capital Washington, DC 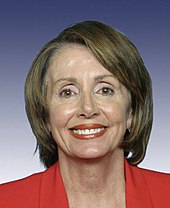 First woman to be the speaker: Nancy Pelosi

Changes compared to the 109th Congress resulted primarily from the changed majority structure: The Democrat Nancy Pelosi , a minority leader since 2003, was elected as the first woman in the history of the United States to be the speaker , replacing the Republican Dennis Hastert , who took over Held post since 1999. With the Republicans, both John Boehner , majority and now minority leader since February 2006, and Roy Blunt , majority, now minority whip since 2003 , kept their posts. With the Democrats, the previous Whip, Steny Hoyer , rose to the group leader, while Jim Clyburn took over his previous post.

Leadership of the majority party

Leadership of the minority party

In the Senate, Democrat Robert Byrd replaced Republican Ted Stevens as pro tempore president . While Harry Reid and Dick Durbin retained their respective posts as representatives of the majority party within the Democratic Party , there were personnel changes among the Republicans: the former Whip Mitch McConnell became the minority leader, while Trent Lott took over his previous post.

Leadership of the majority party

Leadership of the minority party

Elections to the House of Representatives  | Senate elections