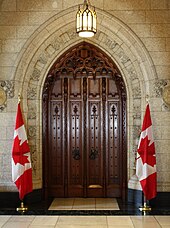 The lower house ( English House of Commons , French Chambre des Communes ) is one of the three parts of the Canadian parliament , next to the monarch (represented by the governor general ) and the senate .

The House of Commons has its seat in the Parliament Building in Ottawa . It consists of 338 democratically elected members. Each member of the House of Commons represents a constituency ( riding , frz. Circonscription électorale ), each of which uses the simple majority vote , which favors the larger parties and favors the formation of a majority government. The seats are to be distributed proportionally according to the population to the ten provinces and three territories , the distribution is based on the census carried out every ten years. The Constitution of Canada , however, prevents provinces from losing too many seats due to population growth and tends to favor smaller provinces.

The Canadian House of Commons came into being in 1867 when the British Parliament passed the British North America Act , making the province of Canada ( divided into Québec and Ontario at this point ) and the colonies of Nova Scotia and New Brunswick the Canadian state. The new parliament of Canada consisted of the monarch (represented by the governor-general who also represented the Colonial Office ), the Senate , composed of appointed members, and the popularly elected lower house. Parliament was based on the Westminster system . In contrast to the British Parliament, its powers were restricted by the powers of the provincial parliaments. In addition, the Canadian Parliament was subordinate to the British, as this was the highest legislative body of the British Empire . The Westminster Statute granted greater autonomy in 1931, and the British Parliament only had a say in constitutional amendments. This derogation expired with the 1982 constitutional law .

The lower house has 338 members, each of whom represents a single-electoral district. The constitution prescribes a minimum size of the lower house of 295 members. The seats are distributed proportionally to the provinces according to the size of the population, based on the results of the ten-year census. However, the constitution makes certain restrictions. First, the “Senate Clause” guarantees each province at least the same number of MPs as senators . Second, the "grandfather clause" guarantees that the provinces have at least as many MPs as in 1985.

These clauses mean that smaller provinces and those with a proportional population decline are over-represented in the House of Commons, at the expense of the provinces of Ontario, British Columbia and Alberta. Independent commissions set the boundaries of electoral districts in each province; there is no subdivision in the three territories. The calculation of the number of seats of the provinces is done as follows: The total population of the provinces and territories is divided by 279, which gives the national quotient. The population of a province is then divided by the quotient to calculate the base number of seats. Finally the additional seats are distributed.

General elections are held when the governor general dissolves parliament on behalf of the monarch, with the prime minister deciding when to dissolve it. The legislative period is a maximum of five years, the election date must be set on a Monday and the election campaign must not last longer than 36 days. Candidates are usually nominated by political parties . It is possible to run as an independent candidate, but the chances of being elected are slim. Party candidates are determined in the constituencies by a nomination meeting.

In order to stand for election, one person must submit a nomination application, which, depending on the size of the constituency, has been signed by 50 or 100 people. One MP is elected in each constituency. The relative majority voting procedure is used: The candidate with the most votes wins, it is not necessary to achieve an absolute majority. If there is a vacancy in an electoral district during the legislative period, a by-election takes place . Canadian citizens who are at least 18 years of age are eligible to vote.

Parliament of Canada :
House of Commons  | Senate of Canada