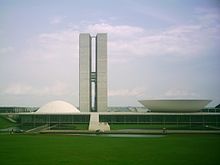 The National Congress is considered to be fragmented. Since the elections in October 2014 , 28 different parties have been represented in the Senate and the House of Representatives, 11 of which form a loose government coalition. Since it is not uncommon for politicians to change parties in Brazil, the number of seats per party changes quite frequently.

In Rio de Janeiro , the Senate and House of Representatives were last housed in the Palácio Tiradentes , the current seat of the legislative assembly of the state of Rio de Janeiro.

Today's congress building, which has housed both chambers since 1960, was built between 1958 and 1960. It is located at the eastern end of the central Eixo Monumental of Brasília and forms its optical conclusion. Like many other public buildings in the city, this building complex was designed by the architect Oscar Niemeyer . In front of the building with the plenary halls, there is a large, sloping lawn, which is a popular place for demonstrations.

The plenary halls of both chambers are located in the low-rise building across the Eixo Monumental. That of the Senate under the concave dome on the left-hand side when looking towards the city center, that of the House of Representatives on the right under the convex shell. The representative offices are located in two high-rise buildings behind the low-rise building. In order to keep the building complex optically in balance, they are offset off-center to the left, in the direction of the smaller dome compared to the shell. The building complex also includes other buildings in the area, some of which are connected by underground tunnels.