Oscar Ribeiro de Almeida Niemeyer Soares Filho (* as Oscar de Almeida Soares on December 15, 1907 in Rio de Janeiro ; †  December 5, 2012 there ) was a Brazilian architect . He is considered a pioneer of modern Brazilian architecture. Niemeyer designed numerous public buildings for the Brazilian capital Brasília , which was declared a World Heritage Site in 1987 . In 2013, its architectural drawings and construction plans were declared a World Heritage Site by UNESCO .

Niemeyer was one of six children from a Catholic family in Rio de Janeiro. His father worked as a typesetter and had a graphic design office, and his grandfather was a judge at the Brazilian Supreme Court. Niemeyer later adopted the German surname of his paternal grandparents. His maternal grandparents were members of the Brazilian Communist Party.

Its German name goes back to Konrad Heinrich von Niemeyer (1761-1806), who emigrated from Hanover to Portugal in 1778 and worked there as a surveyor. His father Jakob Konrad von Niemeyer (1730–1808) in turn was major general and regiment chief of Cavalry Regiment No. 8 in the service of the Electorate of Braunschweig-Lüneburg ; he had Count Wilhelm of Schaumburg-Lippe ( port. : Conde de Lippe ) support to successfully repel the Spanish invasion of 1762 in Portugal. 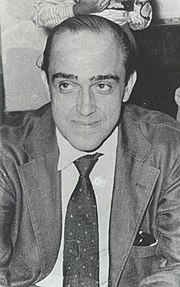 Oscar Niemeyer in the 1950s

He graduated from the Catholic Barnabite High School in Rio. In 1928 Oscar Niemeyer began studying architecture at the Escola Nacional de Belas Artes , the national art school in Rio de Janeiro , which he graduated in 1934. He then worked in the office of the Brazilian architect and urban planner Lúcio Costa . The contract to Costa's office to build the first modern Brazilian building, the Ministry of Education and Health in Rio de Janeiro (today's Palace of Culture ), brought Niemeyer and Le Corbusier together. This later made him his assistant. In 1945 Niemeyer joined the Brazilian Communist Party ( Partido Comunista Brasileiro - PCB). In the years 1947 to 1953 he was the representative of Le Corbusier in the planning committee of the UN for the headquarters of the United Nations in New York City . The collaboration with Le Corbusier was to have a strong influence on Niemeyer's work by later adding circles and curves to the strict orthogonality of modern architecture.

Early on, Niemeyer relied almost exclusively on reinforced concrete as a building material, for which he opened up new application possibilities. In its futuristic and sculptural design language with curvy, soft contours, it always maintained a balanced relationship between free space and volume. He almost completely renounced the orthogonality of many of his colleagues. His bold and unconventional designs established his reputation as one of the most important representatives and innovators of architectural modernism . He didn't think much of the Bauhaus , which in his opinion, with its monotonous, repetitive rules, inhibited the development of architecture.

The best known are his designs for the construction of the planned Brazilian capital Brasília between 1957 and 1964. All public buildings in the city planned on the drawing board come from his hand. Lúcio Costa became its executive city planner. In 1987, UNESCO declared Brasília a World Heritage Site .

In 1966, two years after the military had seized power in 1964 , Niemeyer went into exile in France because of his membership in the Communist Party of Brazil. At the end of the 1960s he was able to continue his work in Brazil. Among other things, he taught at the Universidade Federal do Rio de Janeiro (UFRJ), but only returned to Brazil in 1982 after the general amnesty in 1979. During his years in exile, he built the headquarters of the French Communist Party in Paris, the House of Culture in Le Havre and the Mondadori publishing house in Milan. In 1990 he left the party, but remained a Marxist.

Niemeyer had a close friendship with the Cuban revolutionary Fidel Castro . One of his last works is a steel sculpture in Havana that symbolizes Cuba's resistance to the economic blockade imposed by the USA . It was completed on December 15, 2007, the 100th birthday of Niemeyer.

Niemeyer died on December 5, 2012 in Rio de Janeiro shortly before his 105th birthday of complications from a melanoma . The governor of the state of Rio de Janeiro, Sérgio Cabral, ordered a three-day state mourning in the state. Brazilian President Dilma Rousseff said Brazil has lost a genius, a revolutionary and the mentor of a new architecture.

Niemeyer married Annita Baldo (Annita Oscar Niemeyer) in 1928, a daughter of Italian immigrants from Padua . In 1930 their daughter Anna Maria was born, Oscar Niemeyer's only child. She later worked as an architect, furniture designer and gallery owner. Annita Niemeyer died in 2004 at the age of 93, after 76 years of marriage. The daughter Anna Maria died on June 6, 2012 at the age of 82, before her father.

On November 16, 2006, one month before his 99th birthday, Oscar Niemeyer married his secretary Vera Lúcia Cabreira, who was 38 years his junior. When he died in December 2012, he left behind his second wife, four grandchildren, thirteen great-grandchildren and several great-great-grandchildren.

Oscar Niemeyer is one of the most creative architects of the 20th century. He realized a total of more than 600 buildings. He himself divided his work into five periods: Pampulha, Pampulha to Brasília, Brasília, buildings overseas (Paris, Milan, etc.) and late works. A number of buildings are considered modern architecture icons .

Around twenty projects are being set up in several countries.

The British architect Zaha Hadid confessed that Niemeyer's style had had the greatest influence on her.

The documentary Oscar Niemeyer - Life is a breath (original title: Oscar Niemeyer - A vida é um sopro ) about the life and work of the architect was released in German cinemas on January 14, 2010. The documentary took ten years to complete. The writers Eduardo Galeano and José Saramago , the songwriter Chico Buarque and the Marxist historian Eric Hobsbawm were interviewed as companions of Niemeyer's . 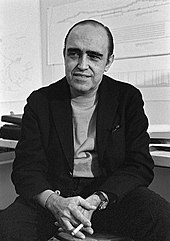 “The right angle doesn't attract me, and neither does the straight, hard, inflexible line that humans have created. What attracts me is the free and sensual curve that I find in the mountains of my country, in the meandering course of its rivers, in the clouds of the sky, in the body of my beloved woman. The whole universe is made of curves. Einstein's curved universe . "

"You have to fight against the functionalist architecture that uses reinforced concrete to create rectangular and barren rooms."

"The architecture consists of dream, fantasy, curves and empty spaces."

"The communists are the only ones who still want to create a better world."

"The future will never look as good again as with the Brazilian man's buildings."

For the 100th birthday