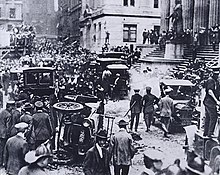 The location of the attack. At the top right of the picture you can see part of the Federal Hall .

The 1920 Wall Street bombing was one of the worst terrorist attacks of its time. It happened on September 16, 1920 on Wall Street , New York City .

On September 16, 1920 at 12:01 pm , an explosive device consisting of around 50 kilograms of trinitrotoluene and 250 kilograms of iron parts detonated in a horse-drawn cart opposite JP Morgan's headquarters at 23 Wall Street . The iron parts were so-called sash weights , i.e. counterweights for metal sliding windows. The attack immediately killed 30 people and injured over 300 people. In the days that followed, nine or ten other people died as a result of their injuries. The window panes on the 20th floor of nearby buildings were destroyed by the massive detonation ; total property damage was $ 1.5 to 2.5 million.

The fact that the bomb detonated shortly after 12 noon resulted in injuries or deaths to many employees of the surrounding banks who were about to be released for lunch.

Shortly after the attack, a stack of leaflets was found in a mailbox one block down :

“Remember: we will not take it any longer. Free the political prisoners or it will be certain death for all of you. "

Presumably, the leaflets represented a kind of letter of confession. Because of the content, it was assumed that the perpetrators came from the anarchist scene. Since the explosive device detonated across the street from JP Morgan, there was speculation about an attempted murder of the founder of the bank. However, because he was on business in Europe at the time , this theory was soon dropped.

Former tennis pro Edwin Fischer was reported to have made vague hints about an assassination attempt on Wall Street . But since he was mentally ill and there was no other possibility of perpetration, this assumption was also dropped.

Since gold worth around $ 900 million was to be transported on September 16, a more recent theory assumes that the bomb was part of a failed robbery. However, because no evidence of possible robbers was found, it is questionable whether the attack had anything to do with the gold transport.

It is most likely that the bomb was planted by perpetrators from the anarchist milieu; there is speculation about a connection with the arrests of the anarchists Nicola Sacco and Bartolomeo Vanzetti , who had been arrested five days earlier on suspicion of murder . 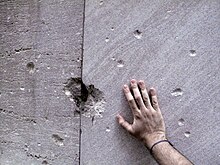 Traces on the exterior of the former JP Morgan headquarters

In response to the attack, the responsible authorities in Chicago and Boston had their financial districts guarded by police.

In New York, all traces of the accident were quickly removed. Although it was initially unthinkable for many, the stock exchange resumed its regular operations the next day, as one wanted to rule out any negative effects of the attack on the financial market.

JP Morgan never had its facade stripped of the impact points of the iron parts. Neither did this after he moved to 270 Park Avenue . In addition, no memorial commemorates the event.