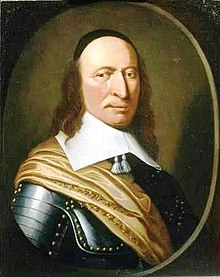 Petrus Stuyvesant, oil painting by an unknown artist, attributed to Hendrick Couturier, around 1660

Petrus Stuyvesant (English Peter , Dutch Peter or Pieter ; * 1612 in Peperga , Friesland , Netherlands , † 1672 in New York ) was governor of Curaçao from 1643 and general director of the colony administered by the Dutch West India Company (WIC) from 1647 Nieuw Nederland , before it was taken over by England in 1664.

Stuyvesant was born in 1612 as the son of a Calvinist clergyman in the province of Friesland (Netherlands). He began his career around 1632 in the Dutch West India Company .

Governor of the West Indies

In 1643 he was appointed governor of Curaçao , Aruba and Bonaire by the Dutch West India Company . In a failed attack on St. Martin , which was then occupied by Spain , his right leg was so badly injured by a cannonball that it had to be amputated below the knee . He has been wearing a wooden prosthesis ever since . His peg leg earned him the nickname "Peg Leg Pete" or "Old Silver Nails" (because of the silver nails with which the peg leg was shod).

In 1644 he returned to the Netherlands. Two years later he was appointed General Manager of New Netherlands. He was commissioned to improve the colony's economic yield and to end hostilities with the Indians. He took his oath of office on July 28, 1646 and set off for America, where he arrived on May 11, 1647.

The official inauguration took place two weeks later, and Stuyvesant appointed a council and a court of justice. As a concession to the will of the people, he had 18 delegates elected in a general election, from which the governor and his council formed a committee of 9 representatives. Its powers were, however, only of an advisory nature.

As a staunch Protestant, Stuyvesant tried to prevent the immigration of Jews and English Quakers . His first edicts included absolute Sunday rest and banned the sale of alcohol and weapons to the Indians . He also directed his attention to protecting and increasing the colony's income. To this end, he increased taxes on imported goods.

In order to improve conditions in the colony, he took care of the building of better houses and inns, established a market and an annual cattle fair, and suggested the establishment of a public school.

The first two years as governor in New Netherlands were not without resistance for Stuyvesant. On the one hand, there were disputes with the large landowners . The " Patroons " did not want to be restricted in their rights by Stuyvesant. They hindered the colony's trade and refused to submit to its authority. On the other hand, Stuyvesant struggled with the council, which often disagreed. This culminated in a letter of complaint from the council to the governor in the Netherlands, who thereupon ordered Stuyvesant to come to Holland. However, since this order had not been confirmed by the company's Amsterdam Chamber, Stuyvesant refused to obey it. In addition, many citizens were dissatisfied because they had the impression that he was steering the fate of the colony in a very despotic manner and primarily pursuing the interests of the company. 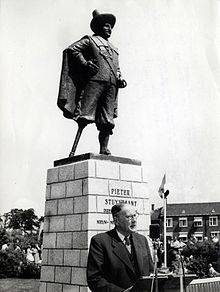 Dutch Minister Kernkamp at the unveiling of a Stuyvesant monument in Wolvega , 1955

Meanwhile, however, Stuyvesant managed to post economic success. In 1648 he secured the colony's privilege for trade with Brazil and in 1652 for the slave trade with Africa . From 1652 the main settlement of the colony had expanded to the lower southern tip of Manhattan . Stuyvesant had a protective wall built in the north - today's Wall Street - and the streets in the settlement were paved and a hospital built.

Despite the visible successes, there were repeated disputes over the limits of the governor's competence, and the settlers demanded more rights. In 1653 an assembly - consisting of two MPs for each settlement in Nieuw Nederland - spoke out in favor of reforms. Stuyvesant ordered the assembly to disband and categorically denied its demands.

Since there was no agreement in the colony, a new regulation for the administration of the colonies was worked out in the mother country . It was decided to set up a municipal administration. As a result, Nieuw Amsterdam received city ​​rights on February 2, 1653 . The administration in the Netherlands served as a model for the reorganization. Stuyvesant saw this as no limitation of his power and continued to run the colony as he saw fit. However, he had to bow to pressure from the West India Company, whose co-owners included wealthy Amsterdam Jews, and allowed Jews to immigrate. In 1657, Stuyvesant accepted requests from some Jews to be granted full rights and duties as citizens. Under his administration, the population rose to 1,500. The competition between Dutch, French and English in the fur trade grew.

Conflict with the Swedish colony

In addition to the Netherlands, the Swedes had also founded a colony on the Delaware River . Stuyvesant's predecessor, Willem Kieft , had sought peaceful coexistence and had friendly relations, since he saw the real threat in the English . Stuyvesant took a different strategy.

The Swedish possessions divided the New Netherlands and made it more vulnerable, so from the start he aimed to defeat the Swedish forts and conquer the Swedish colony. For this purpose he had "Fort Casimir" built in 1651. He planned to encircle the Swedish "Fort Christina", but the plan failed because the Swedes for their part captured "Fort Casimir" in 1654 and called it from then on "Fort Trefalddighet". Stuyvesant gathered his forces and finally defeated the Swedes with his troops in August 1655. New Sweden no longer existed. The Dutch occupied the former Swedish forts and renamed the area New Amstel .

Conflicts with the Indians: The "Peach War"

During his absence, the colony was attacked by Indians. The Legend of the conflict was triggered by the murder of an Indian woman by a Dutch settlers. She had picked a peach from a tree on his plantation and he had shot her for it. There is also an opinion that the Indian attack was a direct response to Stuyvesant's attack on New Sweden.

The Indians used the absence of Stuyvesant and his troops, who were busy fighting the Swedes, to raid the almost defenseless colony. For three days, about five hundred warriors attacked the areas of Hoboken , Pavonia and Staten Island . In the Peach Tree War died about a hundred settlers, among them Adriaen van der Donck . Another one hundred and fifty were captured and many homes were destroyed.

After Stuyvesant returned, he sought a solution to the conflict and began negotiations with the chiefs. At first he managed to get the prisoners free for a ransom. In the course of further discussions the disputes could be settled.

On January 30, 1658, Stuyvesant met with tribal chiefs from the Hudson River area to negotiate the purchase of land. He acquired the entire area between the Hackensack River and the Hudson River, from Weehawken and Secaucus to the "Kill van Kull". This purchase of land resulted in the establishment of the village of Bergen in 1660 (this would later become Jersey City ). The settlement was surrounded with a wooden palisade to protect the residents from Indian attacks. This area is now "Bergen Square" in Jersey City.

In March 1660 a formal peace treaty was finally signed.

After this crisis, Stuyvesant ordered that the settlers around Pavonia should build a solid - well defensible - settlement instead of continuing to live on isolated farms. In 1662 he had the English Quaker John Bowne arrested, which further irritated the West India Company and the English.

Attack by the English and loss of the colony

In 1664, King Charles II of England gave his brother James , the Duke of York , a large area of ​​land in the American colonies - including the Nieuw Nederlands. The aim was to close the gap on the northeast coast in the American possessions, and so on August 27, 1664 four English warships under the command of Captain Richard Nicolls arrived in the port of Nieuw Amsterdam.

On August 30, 1664, the English called on Stuyvesant to surrender . Life, land and freedom were promised to all who would recognize the rule of the English crown.

Stuyvesant was actually willing to defend the colony, but found no support from the population and was forced to sign the surrender agreement on September 6, 1664. The commander of the English fleet was appointed governor by the city council and the city was renamed New York in honor of the Duke of York .

In 1665 Stuyvesant traveled one last time to the Netherlands to report and answer. He then returned to America, where he spent the rest of his life on a large estate outside New York. His house was roughly where 8th Street is today. He also owned a second house on the street in New York that now bears his name.

There is hardly any research on Petrus Stuyvesant. That is why there is no biography that meets today's requirements (status 9/2005). Older works are:

Governors of the Nieuw Nederland