Jersey City is a city in the US state of New Jersey in the United States with around 264,000 inhabitants (2016 estimate, US Census Bureau). The place is the administrative seat ( county seat ) of Hudson County .

The city lies on the Hudson River and Upper New York Bay in the immediate vicinity of New York City north of Bayonne and south of Hoboken , about 25 meters above sea level. The geographic coordinates are 40.71 degrees north and 74.06 degrees west.

The area of ​​present-day Jersey City was a settlement area of ​​the Lenni Lenape Indians, also known as the Delawaren. The first European settlers reached this area after Captain Henry Hudson explored the area of Sandy Hook upstream of the North River , which was later named Hudson River , with the Halve Maen . As a result, this area came under the administration of the Dutch colony Nieuw Nederland . Some of the city's buildings have survived from this era. These include the Van Vorst House , the Newkirk House and the Van Wagenen House . They are among the oldest buildings in the state of New Jersey. After the colony passed into the possession of the English, the urban area remained in the hands of the British even during the War of Independence , and the surprise capture of the fort at Paulus Hook did not change that. On the night of August 19, 1779, Light Horse Harry Lee was able to capture the fort and take dozens of prisoners before he had to retreat before dawn.

The following important information is missing from this article or section:
History of the city after the end of the War of Independence is missing
Help Wikipedia by researching and pasting it .

On December 10, 2019, there was an alleged anti-Semitic attack in Jersey City , in which six people were killed.

There is the Afro-American History Society Museum with information about local African American history, the Jersey City Museum with paintings from the 19th and 20th centuries, and the Immigration Museum on Ellis Island near Jersey City. Ellis Island was the gateway to the United States for twelve million immigrants between 1892 and 1954 . 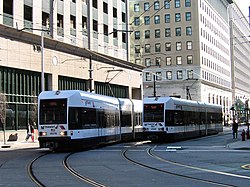 Since 1908 run subways of the Port Authority Trans-Hudson to New York City. On April 15, 2000, the first section of the Hudson-Bergen Light Rail was opened in Jersey City; this light rail goes to Bayonne and Weehawken Township .

In the natural harbor on the Atlantic Ocean formed by the Hudson , the cities of Jersey and New York began to work together in the 19th century to create the infrastructure for overseas freight and later also for inland traffic with the Great Lakes. As a result, a collection of port and shipyard facilities that are constantly adapting to the requirements and are linked to rail transport to Canada emerged between the two cities. They are and have been a major contributor to the region's economic growth. The most relevant institutions for operation and monitoring are the Port Authority of New York and New Jersey and the joint Waterfront Commission .

Jersey City has partnerships with the following cities:

Cities and Towns in Hudson County