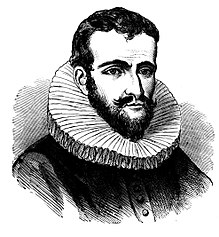 Henry Hudson (* around 1565, † around 1611 ) was an English navigator who became famous through four voyages of discovery.

In 1607 he undertook his first expedition on behalf of the English trading company Muscovy Company . With a single ship ( Hopewell ) Hudson came to the coast of Greenland and Spitzbergen (Svalbard) and discovered the island of Jan Mayen while trying to find a northwest passage from the Arctic Ocean to China. The extent of the intervening land mass was not known.

In the following year he also tried unsuccessfully to find a northeast passage via Novaya Zemlya in the Barents Sea , which although there is, could not be traveled at the time.

In service with the Dutch United East India Company , he set sail from the Dutch island of Texel in 1609 with the ship Halve Maen ( half moon ) on his third voyage. Hudson resumed exploration of the waters off Novaya Zemlya and sought a passage through the ice, against which the crew rebelled. So they sailed west, then south past Nova Scotia and along the North American coast. On September 11, 1609, Hudson penetrated the Bay of New York , sailed along the island of Manhattan (already sighted by Giovanni da Verrazzano in 1524 ) and used the following month to explore the Hudson River as far as the area of ​​today's city of Albany , around 240 Kilometers north of today's city of New York. 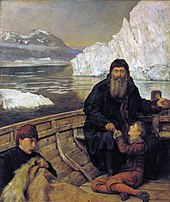 Henry Hudson, his son and crew members after they were abandoned by the mutineers. Painting by John Collier (1850–1934).

In 1610, Hudson set sail on his last voyage on behalf of a newly formed company of English businessmen. With his ship Discovery he was looking for a Northwest Passage again. He reached Hudson Strait in the middle of the year and entered Hudson Bay on August 2nd , where he found an ideal natural harbor. Here he spent the next three months exploring the eastern islands and coasts. Assuming he was in the Pacific, he sailed south to James Bay . In November, his ship was stuck in the ice. A winter of extreme hardship and cold led to a quarrel among the occupants.

In 1611 food ran out on the way back and the crew mutinied. Hudson wanted to make further inquiries along the coast, maybe to find a Northwest Passage after all. Parts of his crew, however, wanted to go home as quickly as possible. Hudson, his son and seven other crew members were abandoned in a small boat at dawn on June 23, 1611 and remained missing afterwards.

Only eight of the mutineers survived the hardships return trip to Ireland. There they were charged, but not convicted, of mutiny. A court found that abandoning experienced seafarers in an open boat near islands that appeared to be inhabited was not murder. It can be assumed that the Admiralty was more interested in the information from the seafarers than in their conviction.

The following are named after him: