As Pikes refers to shoes which converge forward extremely pointed.

The designation pikes is mostly common in the German-speaking area , despite the English form (e.g. tips )
In English, the term Winkle Pickers is used ("periwinkle snails" because they are so pointed that you could literally pull snails out of their shell), sometimes the shortened form Pickers is used in both language areas .

Pikes have been worn by fans of the wave and gothic subculture since the 1980s , here mostly as ankle-height ankle boots with three to five buckles, but there are also flat shoes (with no or only one buckle) and higher boots (up to at least knee height and about 10 buckles). The term pikes also seems to come from the black scene , while in English Winkle Picker is also used for less extreme, mostly earlier forms of pointed shoes.

As trendy shoes for Goths, however, they are now almost extinct and have been supplanted by chunky military and platform boots as well as fetish shoes since the 1990s. Only a few companies still manufacture pikes that are rarely available in German specialist shops on the black scene. Therefore, today in Germany Pikes often have almost the character of collector's items and, due to their poor availability and the associated effort, are sometimes viewed as a kind of statement to feel connected to the original black scene (and less to the diverse modern excesses with their slightly in "Uniform clothing" available at every trendy store). 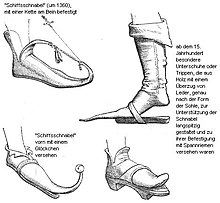 Shoe fashion in the Gothic

The origin of the pikes has not been clearly established. While some see them as a relic of the New Romantic scene (whose influence on the early English Gothic scene is controversial), others suspect the origin in the pointed shoes of the 1950s.

Still others see the origins in cowboy boots (a turn to cowboy-inspired clothing can only be clearly identified in some musicians of the Gothic scene in the late 1980s) or in the pinned shoes of the Middle Ages and / or the Orient (the Middle Ages and as Exotic have always been important elements of English Gothic Fiction , to which the Gothic scene owes motifs, moods and names).