The Maxim Gorki Theater (proper spelling "Maxim Gorki Theater") in the Dorotheenstadt in the district of Mitte ( district center ) of Berlin , with 440 seats, the smallest of the Berlin State Theater. The theater resides in the building erected and owned by the Choir Association of the Sing-Akademie zu Berlin near the promenade street Unter den Linden , behind the chestnut grove . It is named after the Russian-Soviet writer Maxim Gorky .

Due to its history as the main house of the choir, the building is often referred to as the Singing Academy .

As a result of the formalism dispute and as a response to Brecht's Epic Theater in the Berliner Ensemble , the theater was founded in 1952 "as a place for the cultivation of Russian and Soviet theater art" and was committed to socialist realism under its first director, Stanislavsky student Maxim Vallentin . The originally planned opening of the theater with Maxim Gorki's night asylum was stopped by the State Art Commission. Instead, the house opened on October 30, 1952 with the German premiere of the Soviet play For those at sea by Boris Lavrenjow .

In the so-called cultural thaw period (see also de-Stalinization ) at the end of the 1950s (also under the influence of the uprisings in the GDR , Poland and Hungary ) such pieces as Alfred Matusche's Nacktes Gras and Heiner Müller's The Correction were performed and The wage pusher . Heiner Müller was employed as a dramaturge at that time.

In 1988, the GDR premiere of Volker Braun's The Transitional Society, directed by Thomas Langhoff, caused a sensation as a swan song for the social conditions in the GDR.

On the occasion of the 50th anniversary in 2002, the then artistic director Volker Hesse summarized:

“The Gorki Theater and its surroundings have been shaped by constant upheavals [...] The house should have been a lot in the past fifty years: a model stage for socialist realism, a place of representation for Soviet and Russian drama, a venue for new German authors, a discussion forum for SED-critical movements, a metropolitan boulevard - Meeting point and place of the poetic rapture. [...] Especially in the last years of the GDR, the Gorki had a publicity function that gave theater work a necessity and meaning. "

Maxim Vallentin , founding member of the Deutsches Theater-Institut Weimar (1947–1953) , worked as the first director at the newly founded Maxim-Gorki-Theater from 1952. Most of the ensemble came from the Leipzig Theater School or its former institutes.

The directors who directed Maxim Vallentin at the Gorki Theater were:

Albert Hetterle had been an actor at the Maxim-Gorki-Theater since 1955 and took over the management of the house in the 1968/1969 season. He caused a stir u. a. 1988 due to the implementation of the performance of Volker Braun's The Transitional Society, directed by Thomas Langhoff , which anticipated the fall of the SED dictatorship (premiere: March 30, 1988).

Directors during Albert Hetterle's directorship were:

Bernd Wilms came to the Maxim-Gorki-Theater from the Ulm Theater as the new director in the 1994/1995 season . He then headed the Deutsches Theater Berlin ; from 2008 to 2010 he was also the curator of the Hauptstadtkulturfonds in Berlin.

Directors during Bernd Wilms' time as artistic director were:

as well as the 20 directors of Schillernacht der Authors (premiere: January 21, 2000)

Volker Hesse had already worked as a freelance director at the Maxim-Gorki-Theater ( Weisman and Rotgesicht by George Tabori, 1991) before he took over the management of the house in 2001.

Directors during his time as artistic director were u. a .:

Before taking over the Gorki Theater, Armin Petras worked a. a. In the early / mid-1990s as a director at various East German theaters, as well as at the Staatstheater Kassel and the Schauspiel Frankfurt . In the 2013/14 season he moved to the Staatstheater Stuttgart to take up acting.

Directors who produce during the artistic direction of Armin Petras at the Gorki Theater are among others. a .:

For the new 2013/14 season, Shermin Langhoff and Jens Hillje have taken over the management of the Gorki Theater. One of their goals is the productive handling of social heterogeneity, which does not focus on the consent of small groups, but on the discussion in society as a whole. The emphasis is on the tension between responsibility and guilt, inside and outside. Most actors come from a migrant background. Under the new management, the proportion of young theater-goers increased further, which had already been around a quarter under Armin Petras, and with productions like Common Ground it was also possible to address an audience that is otherwise rather remote from the theater. After the first season, the Gorki Theater was voted Theater of the Year by Theater heute magazine . With its political productions, the theater has become “an important voice in Berlin”.

Directors who produce during the directorship of Langhoff and Hillje at the Gorki-Theater include:

With the Gorki Studio, the theater has a second venue not far from the main building, in the street Hinter dem Gießhaus. It has been called Studio sie since the 2013/14 season and was under the artistic direction of the playwright Sasha Marianna Salzmann until 2015 . Then the author Necati Öziri took over . The director and dramaturge Tobias Herzberg has been the artistic director since the beginning of the 2017/18 season .

The studio Я sees itself as an “art asylum” for marginalized topics and ways of thinking, as a forum for discussions and creative processes that are conceived internationally. 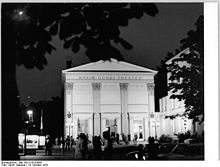 Berliner Festtage (October 13/14, 1979), on the occasion of the first appearance of the Kathakali Theater from India

It is the oldest concert hall building in Berlin. The building was built on behalf of the Sing-Akademie zu Berlin , founded by Carl Friedrich Christian Fasch in 1791 , which, under its then director Carl Friedrich Zelter, built its own concert hall and home with it from 1825 to 1827. The design and execution was carried out by Carl Theodor Ottmer using plans by the architect Karl Friedrich Schinkel in a classicist style. Alexander von Humboldt held his Kosmos lectures here in 1827 and 1828 . The first performance of the rediscovered St. Matthew Passion by JS Bach took place on March 11, 1829 by the Sing-Akademie under the direction of Felix Mendelssohn Bartholdy . In the summer of 1848 the building was the meeting place for the constituent Prussian National Assembly .

The Sing-Akademie performed there until the house was badly damaged in World War II . The Soviet occupying power then confiscated the building and, after reconstruction in 1947 , used it as the theater of the neighboring "House (es) of Culture of the Soviet Union" (the current Palais am Festungsgraben ). After the fall of the Wall , between 1990 and 2012, a very complex legal dispute was fought between the Sing-Akademie and the State of Berlin, both under administrative law ( restitution ) and civil law (correction of the land register entry) over the building and the associated parcels. After the Administrative Court of Berlin ruled in favor of the choir in 2004, the dispute went to the next instance.

On July 7, 2011, the Berlin Court of Appeal decided, contrary to the previous opinion of the Administrative Court and the Regional Court, that the land had been effectively expropriated, so that the house initially remained the property of the State of Berlin. The Court of Appeal had expressly left open whether the State of Berlin would have to transfer the land back to the Sing-Akademie by way of restitution under the Property Act , as it did not have to decide. In a judgment of December 7, 2012, the Federal Court of Justice ruled that the building with the property was not effectively expropriated and is therefore still owned by the Sing-Akademie, so that the defendant State of Berlin must cooperate and agree to the correction of the land register, that the Sing-Akademie zu Berlin is entered in the land register as the owner. As a result, the state of Berlin officially rented the building for the Maxim-Gorki-Theater and signed a leasehold contract for 25 years, which provides for an annual rent of 315,000 euros each.

The theater is a rectangular building with a temple-like facade. The narrow side of the show is divided into three parts by Corinthian colossal pilasters and finished off with a tympanum above the surrounding entablature . The portals are designed in the manner of an aedicle , above which there are plastered mirrors separated by a cornice . The capital zone is decorated with a griffin frieze. After the Second World War, the facade of the heavily damaged building was faithfully restored. Exceptions were the side fronts, which were opened through windows on both floors before the war, and the current writing “Maxim Gorki Theater” on the facade. The staircase extensions from 1875 and 1888 at the north and south-west corners were not rebuilt either.