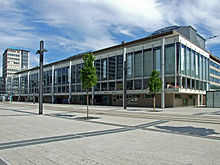 The Schauspiel Frankfurt is one of the two branches of the municipal theaters in Frankfurt am Main . Together with the Frankfurt Opera , the theater has been based in the Opera and Drama Theater on Willy-Brandt-Platz since 1963 (until 1993: Theaterplatz ). It was created by expanding the theater built in 1902 and partly destroyed in 1944 , the remains of which were converted into an opera in 1949–1951. A municipal theater has existed in Frankfurt since 1782. Anselm Weber has been the director of the theater since 2017 .

The Schauspiel Frankfurt is the largest spoken theater in the Rhine-Main area . It is also attracting national attention. Anselm Weber , who has been artistic director at Schauspiel Frankfurt since summer 2017, has brought in directors who are the leading figures of a younger generation of theater: Roger Vontobel and David Bösch . In addition, in the 2019/20 season u. a. Jan Bosse , Johanna Wehner , Felicitas Brucker , Jessica Glause , Barbara Bürk , Sebastian Schug and Jan-Christoph Gockel . With his deputy and chief dramaturge Marion Tiedtke, he put the focus on the city: through a series of nine premieres over three years by well-known authors such as Zsuzsa Bank , Lars Brandt and Martin Mosebach, as well as through the city's largest cultural education project to date: » All Our Futures «- a three-year theater project on the future of living together, developed with 180 young people.

The building complex of the Städtische Bühnen at Willy-Brandt-Platz , which includes theater and theater as well as the opera , is in need of renovation and only partially meets today's safety regulations. A study presented in June 2017 came to the conclusion that a renovation or a new building would cost more than 800 million euros. In April 2018, a citizens' initiative ( Aktiongemeinschaft Schauspielhaus Frankfurt eV ) was formed to support the demolition of the new building, which was perceived as ugly, and the reconstruction of the historic theater . On January 30, 2020, the city ​​council decided to demolish the building. Opera and drama are to have new buildings, possibly in separate locations. In May 2020, however, the Hessian State Office for Monument Preservation published a report confirming the monument value of the foyer built in 1959-63 "for historical, artistic and urban planning reasons" and thus the public interest in the preservation of the building with its works of art.

The Comoedienhaus was Frankfurt's city theater from 1782 to 1902

Theater was played in the old playhouse from 1902 to 1944. This building in the style of historicism is partly still under the modernist facade from 1963.

In 1592 the visit of an English comedian troupe to the autumn fair in Frankfurt is attested for the first time . In the following centuries, traveling groups of actors played again and again, mostly at masses or on the occasion of imperial coronations .

In 1736 the famous Caroline Neuber troupe made a guest appearance in Frankfurt. There was no permanent venue , but rather the traveling groups of actors erected their own stage tents for their guest performances or played in pubs . For a long time, mostly antics and impromptu comedies were performed.

The then leading German theater principal Abel Seyler worked mainly in Frankfurt from 1777 to 1779 and is considered the father of Frankfurt theater life.

Towards the end of the 18th century, in the age of the Enlightenment , the first dramas of German Classics were written . The Frankfurt bourgeoisie wanted to have their own theater building. Against the opposition of the Lutheran clergy, who regarded the comedy repertoire as sinful and considered it to be contrary to the Word of God and the Holy Baptism Covenant, the council of the Free Imperial City of Frankfurt am Main pushed through the construction of a Comedy House .

On September 3, 1782, the stage curtain of the newly built Frankfurt National Theater on the north side of what was then Theaterplatz (today Rathenauplatz ) in Neustadt rose for the first time . The classicist building based on plans by city architect Johann Andreas Liebhardt aroused great admiration when it opened. Friedrich Wilhelm Großmann became the first theater director. In 1784, Friedrich Schiller 's play “ Cabal and Love ” was premiered in the new building . The most famous Frankfurt actor of the 19th century was Samuel Friedrich Hassel , important Frankfurt playwrights were Carl Malß and Adolf Stoltze .

The theater was initially operated as a stock corporation - economically at times successful, at times less successful. In 1841 this was dissolved and the operation of the now called Frankfurt City Theater was licensed to the entrepreneurs Guhr , Malß and Meck in 1842 . After the death of Guhr and Malß in 1848, their tasks were taken over by Julius Mühling . From 1853 to 1854 Johann Hoffmann was the sole entrepreneur, after which a renovation took place in 1855 and the theater was again licensed to a stock corporation.

The old city theater gradually became too small for the city of Frankfurt, which had grown into a large city in the 19th century. It was closed in 1902, laid down in 1911 and replaced by a splendid commercial building.

On November 1, 1902, the Schauspielhaus, a monumental Art Nouveau building on Gallustor (formerly Theaterplatz, today Willy-Brandt-Platz ) opened, which under the long-time director Emil Claar (director from 1879 to 1912) developed into one of the most important theaters in the country. His successor was Max Behrend (1912–1916).

Under the artistic director Karl Zeiss (1916–1920), opera and drama were again conducted together for a short time. From 1920 to 1929 Richard Weichert , a student of Max Reinhardt, directed the theater. Sofert's successor was Alwin Kronacher (1929–1933). During the time of the Weimar Republic , the Frankfurt theater worked on nationally important expressionist productions. Ludwig Sievert was an important stage designer during this period of "Frankfurt Expressionism" . In 1926 the world premiere of Bertolt Brecht's “The Wedding” (today: “The Small Bourgeois Wedding”) took place.

In 1933, the synchronization of the theater after the National Socialist seizure of power caused a turning point. Hans Meissner (1933–1944) became the new general director of the city theaters . Numerous authors were banned, Jewish actors were dismissed or expelled. Only the Römerberg Festival founded by Kronacher in 1932 , summer open-air productions against the backdrop of the Römer , provided international splendor until 1939.

On January 29, 1944, the theater was destroyed except for the outer walls in one of the air raids on Frankfurt am Main . Initially, the city's theaters tried to maintain emergency operations at changing venues, but on September 1, 1944, all theaters in Germany ceased operations.

After the end of the war, the city's theaters began operating again in autumn 1945 in the few undestroyed halls in Frankfurt, in the Frankfurt Stock Exchange and the former Reichsender Frankfurt on Eschersheimer Landstrasse . Toni Impekoven (1945–1947) became the first post-war director . Carl Luley and his partners Anny Hannewald and Else Knott were among the most popular actors of the time . The successor to Impekoven, who died in May 1947, was again Richard Weichert as general manager. For a short time, Heinz Hilpert also acted as "chief manager" of the theater.

From 1949 to 1951 the burned-out theater was restored as a venue for the Frankfurt Opera . The theater continued to rely on provisional venues. It was not until 1963, when the so-called double theater system went into operation , that the drama was given a permanent venue again, which is connected to the opera by a 120-meter-long glass facade and a shared foyer. Otto Apel's office (since 1961 ABB architects: Otto Apel , Hannsgeorg Beckert , Gilbert Becker ) was in charge of the new building of the theater and the foyer .

In the 50s and 60s, the Frankfurt theater built on earlier successes under its artistic director Harry Buckwitz (1951–1968). The last general director of the Städtische Bühnen was Ulrich Erfurth from 1968 to 1972 . When his contract expired, the two divisions that had previously been managed together were separated.

From 1972 to 1980 Peter Palitzsch was director of the Schauspielhaus . He introduced the participation model in the theater. Productions such as the Medea by Euripides , staged by Hans Neuenfels in 1975 , and “Days of the Commune” by Bertolt Brecht , staged by Peter Palitzsch in the German autumn in 1977 , led to scandals.

This was followed by a short time as director under Wilfried Minks and Johannes Schaaf . Internal disputes soon overshadowed the artistic work, and there were profound disputes between the ensemble and the management. The season began with Georg Büchner's “ Dantons Tod ” staged by Johannes Schaaf, Kleist's Penthesilea (director: Wilfried Minks) and “ Tartuffe ” by Molière with Bierbichler and Schediwy staged by BK Tragelehn , which was one of the few artistic highlights of the period marked.

On March 21, 1981, sympathizers of the RAF demonstrated during a performance against the prison conditions and then kept the theater occupied. After the mayor of Frankfurt Walter Wallmann took over the house rights, the house was cleared by the police. The next day the ensemble protested against the “disproportionate use of force” by the police and had a declaration read out before the performances in which they expressed their solidarity with the occupiers' demands. The declaration by the Frankfurt drama ensemble read:

“On March 21, 1981, a group of young people used the opportunity of a performance by the Frankfurt Theater to make a human rights demand with which we would like to show solidarity: to ease the prison conditions for political prisoners who have been on hunger strike for six weeks. Some of them are now in mortal danger. The group of twenty to thirty young people behaved calmly and disciplined. They wanted to stay in the house overnight in order to inform the public about their concerns the next day and then leave the house. In the early morning hours of March 22, 1981, the theater was evacuated by the police with disproportionate use of force. Domestic rights were taken away from the theater management by the city authorities. The ensemble of the Schauspiel Frankfurt protests against the forced evacuation of the theater. "

The head of the cultural department, Hilmar Hoffmann, forbade the board of directors to have the ensemble's declaration of protest read out further before the performances and the co-director Eos Schopohl, the head of the artistic office, Hanspeter Egel and the director BK Tragelehn were given notice without notice. Johannes Schaaf had himself suspended from his position on the board of directors. The Frankfurt co-determination model was dissolved ten years after its establishment in 1981 by the Frankfurt magistrate under Lord Mayor Wallmann.

From 2009–2017, the Schauspiel Frankfurt was directed by director Oliver Reese . In the directorship of Reeses, the Frankfurter Schauspielhaus recorded an increase in attendance of 45 percent and annual attendance of ≈ 170,000 viewers.

In the 2017/2018 season, Anselm Weber took over the management of the Schauspiel Frankfurt.

Overview of the artistic directors

Theater in Frankfurt am Main