This article deals with the Amazon - for other meanings see Penthesilea (disambiguation) . 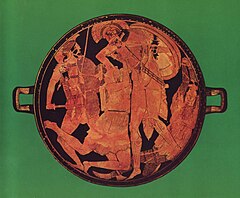 Penthesilea and Achilles ( relief of the Temple of Aphrodite in Aphrodisias , southwest Turkey)

Penthesilea or Penthesileia ( ancient Greek Πενθεσίλεια ) is in Greek mythology the daughter of the Amazon queen Otrere and the Olympian god of war Ares . In the saga of the Trojan War , she herself is the Queen of the Amazons . Penthesilea is mentioned in Aithiopis , an Arktinos of Miletus around 750 BC. Epic attributed to BC , and around 20 BC BC briefly in the Aeneid of Virgil .

After Achilles has killed the hero Hector , son of the king of Troy Priam , Penthesilea comes to the aid of the Trojans, who are hard pressed by the Greek army, with their warriors. First the Amazons put the Greek army in great distress. When Achilles intervenes, however, the tide turns. Finally, Penthesilea is slain by Achilles. When he removes the helmet from the head of the dying Penthesilea, he falls in love with her and regrets what he did. Some companions ridicule him for this, whereupon he kills one of them, Thersites . In different versions of the myth , Penthesilea's body is handed over to the Trojans for burial , thrown into a river by Diomedes or recovered by the Trojans.

The ancient Greek poet Quintus of Smyrna gave the following explanation in the 3rd century for why Penthesilea came to the aid of the Trojans: Penthesilea accidentally killed her sister Hippolyte with a spear while hunting deer. This hunting accident brought her so much grief ( Greek pénthos "suffering, sorrow, sorrow, lamentation") that she just wanted to die. With a warrior and Amazon, however, this could only happen in the field of honor in battle.

The motive of the Amazon Queen served Heinrich von Kleist in 1808 as a template for his eponymous drama Penthesilea , where however Achilles Penthesilea is slain. When she realizes that she and her pack of dogs have mauled the object of her desire, she dies from "a devastating feeling" herself.