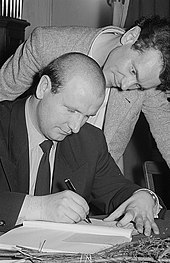 Minetti was the son of the actor Bernhard Minetti . After the war he studied art history and philosophy in Kiel , his father's hometown, and later in Hamburg and Berlin . He financed his studies by working as a journalist for the German intelligence service. He finally got to follow in his famous father's footsteps through acting on student stages. In 1949 he went to Weimar to study acting. In 1953 his theater and film career began. He played at the Maxim-Gorki-Theater in Berlin, later also at the Deutsches Theater , the Berliner Ensemble and the Volksbühne on Rosa-Luxemburg-Platz .

Minetti joined the KPD in 1946 , moved to the GDR in 1949 , where he became a member of the Central Council of the FDJ , candidate of the Central Committee of the SED , president of the Association of Theater Professionals and chairman of the art union.

Between 1974 and 1989 Minetti headed the Ernst Busch State Drama School in Berlin-Schöneweide and was president of the Association for Theater Professionals from 1984 until the fall of the Berlin Wall . This made him one of the most powerful men in theater in the GDR and was able to make a decisive contribution to the well-being of the theater professionals, which earned him severe criticism after the fall of the Wall . After receiving no role offers in the 1990s, he withdrew from touring with solo theater productions. In the years 1999–2002 he appeared in the role of Sigmund Freud in Meinhard Zanger's production of the play The Visitor by Éric-Emmanuel Schmitt at the theater der keller in Cologne 100 times. In 2005 he was given another engagement as Bishop Winchester and Rivers in Thomas Thieme's production of Margaretha. Eddy. Dirty Rich at the German National Theater Weimar .

In 1979 he was awarded the National Prize of the GDR, 2nd class for art and literature. In 1986 he received the Patriotic Order of Merit in Gold.

Minetti was married to the actress Irma Münch until his death . Their son Daniel Minetti has also taken up the acting profession. Minetti's sister Jennifer Minetti was also an actress. Hans-Peter Minetti died of heart failure on November 10, 2006 while taking a spa stay in the Czech Republic. 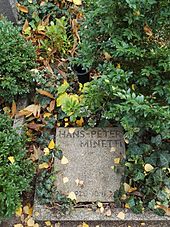 He is buried in the Dorotheenstädtischer Friedhof in Berlin.

Chairwoman of the central board of the art union or the art, culture, media union in the FDGB