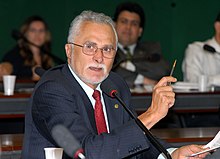 José Genoíno Guimarães Neto (born May 3, 1946 in Quixeramobim ) is a Brazilian politician .

José Genoino Guimarães was born in Quixeramobim, a city of 60,000 in the state of Ceará . At the age of 13 he moved to a pastor in Senador Pompeu, who financed his studies. Genoino became a student leader and a member of the National Union of Students ( União Nacional dos Estudantes (UNE)). After four years as a programmer in Fortaleza, he joined the Communist Party of Brazil ( Partido Comunista do Brasil (PC do B)) at the age of 22 in 1968 . The same was in opposition to the country's military government. When this was banned in December of the same year, Genoino went into hiding in São Paulo, especially since the PC do B propagated armed resistance against the military dictatorship. With the firm intention of fighting in the Guerrilha do Araguaia to transform the country into a communist one, he was arrested in 1972 and spent the next five years in prison. In 1979 he was pardoned and was one of the founding members of the Labor Party ( Partido dos Trabalhadores (PT)).

From 1982 to 2002 Genoino, who is considered a close confidante of the former Brazilian President Luiz Inácio Lula da Silva , was a member of the State of São Paulo in the Chamber of Deputies of the Brazilian Parliament . In 2002 he became President of PT. As a candidate for the ministerial post of the Ministry of Defense, he failed because of the negative attitude of the responsible military.

At the end of 2002 he was elected President of the Labor Party. On July 9, 2005, he resigned after suspicion that he had played a central role in the bribery of MPs by the Labor Party ( Mensalão scandal ), although he denied all allegations. The previous Minister of Education, Tarso Genro , was elected as his successor.

In October 2012, Genoino was sentenced by the Supreme Court to prison terms of two to twelve years, along with Lula da Silva's former head of cabinet José Dirceu and treasurer Delubio Soares . In the money laundering, fraud and corruption proceedings from 2002 to 2005, described by the Brazilian media as the “trial of the century”, a total of 37 former ministers, parliamentarians, bankers and entrepreneurs from the sphere of influence of the Labor Party are indicted. Dirceu, Soares and Genoino are the first high-ranking politicians in Brazilian history to be sentenced to prison terms by the Supreme Court for corruption.

Genoino began his detention on November 15, 2013. On January 6, 2014, the Genoino Enforcement Chamber in Brasília ordered the payment of the sum set in the judgment i. H. v. from 468,000  reais (daily rate: € 144,443) to be paid within ten days. On August 12, 2014, Genoino was released from the semi-open prison after 1/6 of the total sentence in order to serve the remainder of the sentence under house arrest.