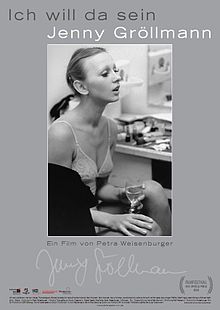 Jenny Gröllmann was the daughter of Otto and Gertrud Gröllmann . Her father, who in the 1930s on the part of the Second Spanish Republic in the Spanish Civil War competition and the resistance during the Nazi era with the Hamburg bästlein-jacob-abshagen group had worked, was set designer . Her mother was a theater photographer and later a picture director for Das Magazin .

In 1949, for professional reasons, the family moved with the two-year-old Jenny to the Soviet occupation zone in Schwerin and in 1955 moved to Dresden , where the father had received a new job. Jenny went to school there and developed a passion for the theater at an early age. At the age of 14, she played the leading role in Brecht's Die Gesichte der Simone Machard under Ottofritz Gaillard in 1961 .

From 1963 to 1966 Gröllmann attended the State Drama School in Berlin . After she had completed this, she got a job at the Maxim Gorki Theater in Berlin , where she was engaged for a total of 26 years. She made her debut at this venue in Ibsen's Nora in the role of a housemaid. Nevertheless, her theater career was initially rather unfortunate after Milan Kundera's then politically controversial work The Owners of Keys , in which she was cast with her first leading role, could not be performed. So she was initially denied the big breakthrough as a theater actress, even if she was entrusted with numerous stage tasks. In 1967 she made her screen debut with the DEFA film Tales of That Night , further DEFA films and television works followed, for example, together with Hannjo Hasse and Heinz Behrens leading roles in productions at the Moritzburg television theater . After success at the Maxim-Gorki-Theater, after 1990 she also received engagements at the Berlin Renaissance Theater , the Schlosspark Theater and the Hamburger Kammerspiele . On German television she became known in the role of the lawyer Isolde Isenthal in the television series Liebling Kreuzberg with Manfred Krug .

Gröllmann gave birth to their daughter Jeanne in 1969, who comes from a connection with Thomas Goguel and who is now a make- up artist . In 1973 she married the director Michael Kann . After divorcing Kann in the early 1980s, she was married to actor Ulrich Mühe between 1984 and 1990 . The marriage resulted in daughter Anna Maria Mühe in 1985 , who also became an actress. After the divorce from Mühe, Gröllmann lived with the film architect Claus-Jürgen Pfeiffer , whom she married in 2004. 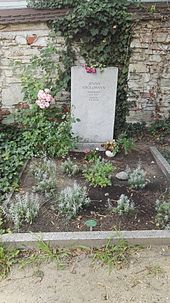 Grave site in the French cemetery in Berlin

In 1999 Gröllmann developed breast cancer . After initial therapeutic success, the actress was diagnosed with cancer again in 2002 and 2005, so she had to give up her role in the television series Storm of Love in 2005 . She died of cancer in August 2006 at the age of 59. She found her final resting place in the French cemetery in Berlin.

Contacts with the Ministry of State Security

In 2001 the Superillu magazine published excerpts from a 522-page file of the Gauck / Birthler authority , according to which Gröllmann was listed as IM "Jeanne" at HA II / 13 of the MfS between 1979 and 1989 . According to the file, “the candidate” chose the pseudonym Jeanne after her daughter's name. IM Jeanne gave, among other things, information about possible escape intentions of members of the Gorki ensemble.

After Ulrich Mühes ’statements in an interview about the allegations in the 2006 book on the film The Lives of Others , Gröllmann and a lawyer from the Berlin firm of lawyers Panka, Venedey, Kolloge, Gysi , Langer obtained before the Berlin Regional Court against Suhrkamp-Verlag and theirs Ex-husband a restraining order . She affirmed that she had never knowingly cooperated with the Ministry of State Security. Her presentation was supported by the statement of the former Stasi major involved in the process that he had always presented himself to her as a criminal investigator and forged parts of the files. Numerous alleged meetings with the alleged officer in charge were recorded in the MfS files at times when the actress was on stage according to the existing performance protocols of the Maxim Gorki Theater.

An expert opinion by the SED State Research Association of the Free University of Berlin , however, came to the conclusion that the MfS records clearly identify Jenny Gröllmann as the MfS IM. However, the court did not accept this report or the incriminating statements by the Gauck / Birthler authorities because it judged the contents of the file only as an indication, not as evidence. The court therefore granted Gröllmann's request and prohibited further distribution of the book in its original form. Therefore the film book is sold to his ex-wife with blackened lines of some of Mühes' answers. The court dismissed Mühes' objection and forbade him to continue to designate Jenny Gröllmann as an IM, since the MfS documents only provided “suspicious factors” but no facts. After he had fought for almost a year with all means, the publishing house recognized in December 2006 in the context of a legal dispute that it would no longer disseminate Ulrich Mühe's statements.

On April 18, 2008, the Berlin Court of Appeal also prohibited Focus magazine from designating Jenny Gröllmann as an IM.