Hohegeiß is a resort in the Harz Mountains and a district of Braunlage in the Goslar district in Lower Saxony . The village has about 900 inhabitants.

The mountain village Hohegeiß is located in the Harz Nature Park . It is located between Sorge in the north-north-east and Benneckenstein in the east (both in Saxony-Anhalt ), Rothesütte in the south-east ( Thuringia ), Zorge in the south and Braunlage in the north-north-west (both in Lower Saxony). By about 570 to 642  m above sea level. NN located village leads in the section between Braunlage and Rothesütte the federal highway 4 crossing the Harz . The state border with Saxony-Anhalt (formerly the inner-German border ) leads past the northeastern edge of the village; the border triangle of Lower Saxony, Saxony-Anhalt and Thuringia , where the three-country stone is located, is located about 3.3 km southeast of the village . The Thick Firs natural monument spreads out near the village .

The place name first appears in 1268 as Hogeyz ; however not yet as a settlement, but as a forest area. In 1444 a chapel was built here (consecrated on September 8th), around which a settlement had formed by 1528, which in 1573 was first referred to as "Dorf Hohegeist".

From 1720 mines were set up in the valleys around Hohegeiß, which were in operation until 1770.

Hohegeiß was first accessible by public transport in 1842, when the Braunschweig-Blankenburg postal route supplied some Upper Harz locations and also had stagecoaches run from Blankenburg via Hohegeiß to Walkenried. In this year the road to Braunlage (today's Bundesstraße 4 ) and the road to Zorge (today's Landesstraße 602) were completed. Efforts to connect the railroad were unsuccessful, however, the Harzquerbahn was not routed via Hohegeiß, nor was the planned extension of the Ellrich – Zorge railway to Hohegeiß implemented.

In 1911 the place got a central drinking water supply, in 1920 a power supply via its own company.

From 1921 there was bus service to Braunlage and Benneckenstein , later also to Walkenried and Bad Sachsa .

From 1943 during the Second World War , Hohegeiß experienced population growth. From Braunschweig and its surroundings, threatened by Allied bombings, children were evacuated with a selection of teachers and carers as part of the expanded Kinderland deportation. Small hotels and private pensions took them in with rationed supplies. In order to avoid the imponderables of the Soviet military approaching in 1945, the children were brought back to their families in the partly bombed-out Braunschweig by train. Numerous refugees also arrived, so that the population temporarily rose to over 2,200.

On August 1, 1963, 23-year-old Helmut Kleinert from Quedlinburg tried to leave the GDR together with his wife Marlit near the northern exit of the town , and was killed by gunfire by the GDR border troops . His wife was arrested before crossing the border. To commemorate Kleinert's violent death, a wooden cross was first set up on the western side of the border, which was replaced by a memorial stone in 1971.

On July 1, 1972, the municipality of Hohegeiß was incorporated into the city of Braunlage.

In 1978, Hohegeiß was officially recognized as a "climatic health resort" after the village had been unofficially called it that way since 1960. As of January 1, 2011, the recognition as a health resort was not extended, since then Hohegeiß has had the tourist status of a resort .

The opening of the inner-German border in 1989 was experienced intensely in Hohegeiß, as the border was not far from the center of the village and represented the eastern edge of the village; several private properties ended at her. From November 12th, the federal highway 4 to Rothesütte could be used by the hour, from November 18th the Benneckensteiner Strasse, initially only for pedestrians.

At the municipal level, being incorporated Hohegeiß is the Council represented the city Braunlage.

The mayor of Hohegeiß is Robert Hansmann (SPD).

The design of the coat of arms of Hohegeiß comes from the author and painter Karl Helbing from Walkenried. Drawn it has in Isernhagen born and later in Hannover living heraldry and crest painter Gustav nations , which includes the coat of arms of Großburgwedel , Melle village , Wunstorf and many other towns in the region Hannover has designed. The approval of the coat of arms was granted on May 12, 1953 by the Lower Saxony Minister of the Interior . 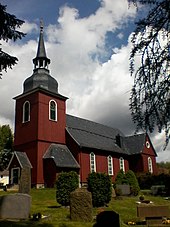 In Hohegeiß there is the Evangelical Lutheran church "Zur Himmelspforte" from the 18th century (Kirchstrasse 7), belonging to the provost of Bad Harzburg .

In 1971 the catholic church " Heilig Geist " was built, it belonged to the parish "Heilige Familie" in Braunlage and was the highest church of the diocese Hildesheim . In 2008 the church was profaned and sold, today it is used as a "Kyriakon" by the neighboring "Hogeyz" hostel. The nearest Catholic church is now 10 km away in Walkenried .