The district of Goslar is a district in the southeast of Lower Saxony . The administrative seat is the large independent city of Goslar .

With the administrative district Harz measuring 371.76 km², it is the largest municipality-free area in Germany and part of the district. The Wurmberg in the southeastern district is the highest mountain in Lower Saxony.

In the natural division of Germany , the district of Goslar comprises the south-western parts of the Innerstebergland and the western part of the Harz rim hollow . Along with the Harly , part of the Harlyberg-Fallstein-Huyberg-Hakel-Blankenburger elevations, which consists of individual, unrelated areas, belongs to the district. The entire southern part is taken up by the Harz , which in this area is divided into Upper and Middle Harz . In addition, a small part south of Seesen belongs to the southwestern Harz foreland .

While in the northern part of the district of Goslar only heights between 200 and a little more than 300 meters are reached (e.g. Bärenkopf , 307 m and Harlyberg , 256 m), the mountains in the Upper Harz reach significantly greater heights (e.g. Dicker Kopf , 670 m and Schalke , 762 m). In the middle Harz, with Achtermannshöhe (925 m), Bruchberg (927) and Wurmberg (971 m), heights of almost 1000 m can be reached. This means that the highest mountain in Lower Saxony is also in this district.

All major rivers in the Goslar district have their source in the Harz Mountains and have been partially dammed. Worth mentioning are the Nette , the Innerste (with the Neile and Grane tributaries ) and the Oker (with the Radau and Ecker tributaries ). In addition, the Oder and the Warme Bode , one of the two source rivers of the Bode, arise in the district of Goslar . Larger areas of water were created in the district in three different ways: 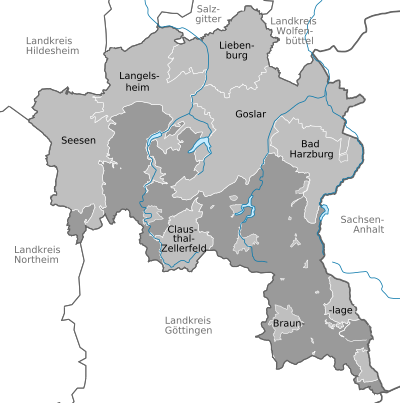 See also : List of municipalities in the Goslar district

* Seat of the joint municipality administration

The following table lists all municipalities that have ever belonged to the Goslar district and their current affiliation:

The district of Goslar, located in Ostfalen (except for Hohegeiß ) , was the focus of history early on. For centuries, its territory was split up between different landlords, later mainly between the Electorate of Hanover , the Hildesheim Monastery and the Principality of Braunschweig-Wolfenbüttel . From 1290 Goslar was a free imperial city , whose influence and surroundings were secured by various protective castles ( Liebenburg , Harliburg , Harzburg etc.). In addition, other powers invaded the territory for a time, so the Counts of Wernigerode tried in the 13th and 14th centuries to gain influence.

Historically, today's district of Goslar grew out of: 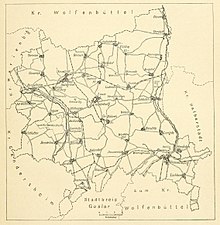 When districts were formed from the offices of the former Kingdom of Hanover in the Prussian province of Hanover on April 1, 1885 , the district of Goslar was also created (from the offices of Liebenburg and Wöltingerode and the city of Goslar.) The city ​​forest of Goslar , which until then became the Duchy of Braunschweig heard, was reclassified to Prussia in 1890 and thus enlarged the district. A slight reduction occurred in 1904, when an approximately 4.5 km² uninhabited area was reclassified to the Harzburg office in Brunswick .

Major changes only took place with the regional reform in Lower Saxony in three steps:

From the 2010s on, several community mergers took place in the Goslar district:

Originally formed as a Prussian district, the district came to the Free State of Braunschweig on November 1, 1941 together with the independent city of Goslar , which in return had to surrender the Holzminden district to Prussia. After the war, the district was in the British zone of occupation and became part of Lower Saxony. 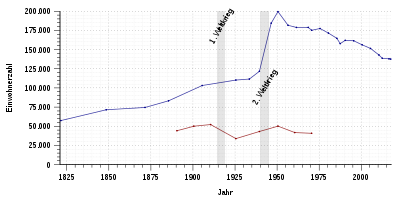 Population development in the district of Goslar from 1821 to 2017. The lower red graph corresponds to the respective territorial status

District of Goslar with the respective territorial status

→ Main article : List of district administrators in the district of Goslar

The district election on September 11, 2016 brought the following result:

Blazon : split into gold and red ; in front half a red-armored black eagle at the gap, behind a left-turning , gold-armored and blue-tongued silver lion .

A partnership with the Polish district of Trzebnica in Lower Silesia has existed since 2000 . Further partnerships existed with the former Frederiksborg Amt ( Denmark ) and the former Wernigerode district .

Entrance gate to HC Starck , the largest employer in the district

Due to its geographical location on the Harz Mountains, the district of Goslar is traditionally characterized by the mining industry. Important industrial locations are the Langelsheim and Oker - Harlingerode area , in the latter is the largest employer in the district, the chemical company HC Starck , which is known for its metallic (tantalum, tungsten, molybdenum) and ceramic (cobalt, nickel, boron) powders is. The companies Harzer Zinkoxyde, Crown, Mann + Hummel, the Asklepios Harzkliniken (Goslar, Bad Harzburg and Clausthal-Zellerfeld) and the Asklepios Kliniken Schildautal (Seesen) should be mentioned as other larger companies. Chemetall in Langelsheim primarily produces lithium products . This metal, along with other products, is increasingly important for lithium batteries and accumulators , which will be important as a power source for electric vehicles. Research is also carried out here into the recycling of lithium batteries from electric cars. Furthermore, the company Electrocycling is located in Harlingerode , which operates one of the largest recycling plants for electrical devices in Europe.

The Münchehof industrial area includes Fels -Werke GmbH (Kalkwerk Münchehof) and the Fermacell works of James Hardie Europe GmbH . The companies TSN-Beton-Südharz and KEMNA Straßenbau GmbH are also located there. In addition, the Lower Saxony Forest Education Center is located in the village.

The Trinks company is a large beverage logistics company that is represented throughout Germany and has its headquarters in Goslar.

Tourism has gained in importance, especially in recent times (structural change) . There are two world cultural heritage sites in Goslar , a large part of the district is still occupied by the Harz National Park . Bad Harzburg , Braunlage and Clausthal-Zellerfeld are traditionally shaped by tourism.

In the Future Atlas 2019, the district of Goslar ranks 287th out of 402 districts, municipal associations and independent cities in Germany and is therefore one of the regions with "balanced opportunities / risks". The district has thus caught up by 51 places compared to 2016.

The district of Goslar has three motorways. The federal highway 7 crosses the Seesen city area for about 15 kilometers in the western part of the district and has the exits Rhüden / Harz and Seesen / Harz . It leads towards Kassel to the south and Hanover to the north. In the eastern part of the district in the city of Goslar there is the Federal Motorway 36 , which was newly established in 2019 , through which there is a connection to the metropolitan areas of Braunschweig and Halle (Saale) in Central Germany and here has the Lengde , Vienenburg and Osterwieck exits. At Goslar- Lochtum at the northern Harz motorway triangle , the 369 federal motorway branches off as a feeder for traffic to Bad Harzburg. It has the Vienenburg-Süd and Harlingerode runs and ends in the Bad Harzburger Dreieck .

The Bundesautobahn 36 was originally planned with the Bad Harzburger Dreieck as the beginning. Using the current B6 route, it should bypass Goslar further north and connect the northern district from east to west. A continuous route via Alfeld (Leine) and Hameln to Bielefeld , in part as federal motorway 35 , was discarded after the 1970s.

The B 82 together with their relation Seesen-Goslar the most important east-west link within the county. The traffic from the eastern northern Harz to the A 7 runs over it, a three-lane expansion as a trunk road has taken place over a long distance .

The B 6 leads via Hildesheim and Salzgitter through Liebenburg to Goslar. Here it joins the B 82 and continues to the east as a motorway-like main road through the Goslar city area. From the GS-Oker junction, it is designed with hard shoulder and meets the minimum standards for a motorway; it joins the A 369 at the Bad Harzburg motorway triangle, so that the A 7 – A 36 connection is completed here.

The B 4 , which once led as a country road from Bad Harzburg to Braunschweig and was replaced by motorways and motorway-like routes from 1971 to 1994 , also begins at the motorway triangle . It initially runs as a four-lane route through Bad Harzburg's urban area and continues into the Harz as a four-lane route, but without hard shoulder. At the Torfhaus level, it changes into a three-lane and later two-lane structure before opening up Braunlage with a three-lane construction method as a bypass. South of the village of Hohegeiß, the B 4 leaves the state of Lower Saxony and continues in the direction of Nordhausen and Erfurt .

The B 243 begins directly on the A 7 in Seesen and is also developed like a motorway. It leads south past the urban area and leads the traffic from the southern Harz on its four-lane route to Herzberg into the district, so that it serves to relieve the A 38 further south .

→ Main article : List of district roads in the Goslar district

The Vienenburg station is the oldest operating station in Germany

The area of ​​today's district was connected to the railway network with the Braunschweig – Bad Harzburg railway as early as 1840. From this, the Braunschweig – Kreiensen railway branched off via Seesen since 1856 and the Vienenburg – Goslar railway since 1866. Since 1875 the Hildesheim – Goslar line and the former Halberstadt – Vienenburg line (until 1945, now with a new route along the Heudeber-Danstedt – Vienenburg line ) have been part of the Hanover –Northharz– Halle (Saale) connection . There is also the connection from Seesen to Herzberg and the connections Seesen – Goslar and Goslar – Bad Harzburg .

After extensive closures of railway lines, the bus service in the Harz is of great importance. As a result, Regionalbus Braunschweig (RBB) initially established itself as the main provider in the district, replacing the canceled stations as a subcontractor of Deutsche Bahn . In January 2019, the RBB decided to give up 17 lines in the northern district (Seesen / Salzgitter-Bad / Goslar / Bad Harzburg area) due to inefficiency. HarzBus GbR was formed in February 2019 as a consortium of several transport companies to maintain the existing line of routes and took over the operation of all lines canceled by RBB on April 1, 2019. In Bad Harzburg, the Kraftverkehrsgesellschaft Braunschweig covers regular service and has its own depot there.

With the Goslar district of Vienenburg, the district is connected to the Saxony-Anhalt state network with line 210 (Vienenburg ↔ Halberstadt ) .

The entire part of the Harz in the district of Goslar belongs to the cross-county Harz Nature Park , with the exception of an area in the southwest, which is even more strictly protected as the cross-border Harz National Park . There are also 22 nature reserves .

On July 1, 1956, the district was assigned the GS distinctive sign when the vehicle registration number that is still valid today was introduced . It is still issued today. Since November 15, 2012, as a result of the license plate liberalization , the distinctive signs BRL (Braunlage / Landkreis Blankenburg (Lower Saxony) ) and CLZ (Clausthal-Zellerfeld / Landkreis Zellerfeld ) have been available.