This article deals with the Lower Saxony municipality of Liebenburg. For further meanings, see Liebenburg (disambiguation) .

Liebenburg is a municipality in the Goslar district in Lower Saxony .

Liebenburg is located on the eastern edge of the southern Salzgitter ridge in the northern Harz foreland between Salzgitter-Bad and Schladen-Werla on the 210 m high Burgberg. The Stobenbergbach, a tributary of the Warne, flows through the village . The closest cities are Goslar , Salzgitter and Wolfenbüttel . 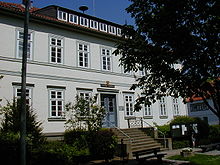 Front entrance to the municipal administration

The heavily destroyed "Chamber of the Central German Type" of Liebenburg, excavated by Alfred Tode, is only a few kilometers northeast of the gallery grave of Bredelem .

The establishment of Liebenburg can be traced back to the settlement of construction workers, day laborers and craftsmen who settled in the second half of the 17th century below Liebenburg Castle , which was built around 1292 and was in ruins . The resulting place was called " Burg Freiheit Liebenburg". The Amtshof, today's domain , was the only farm.

Even today, the development of the place is supported by the private neurosurgery and care clinic founded in 1882. Fontheim, which with its various open and closed psychiatric wards takes up part of the area, as well as through the merger with the village of Lewe in 1937 .

The area of ​​today's municipality belonged to the Kingdom of Hanover or the Prussian Province of Hanover since the 19th century . The only exception was Ostharingen, a Brunswick exclave . In 1941 the Hanoverian towns with the entire district of Goslar were incorporated into the state of Braunschweig, which was incorporated into Lower Saxony in 1946. 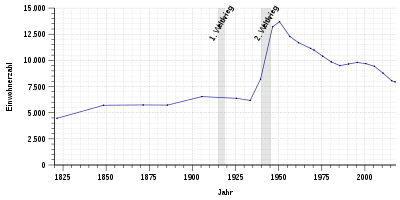 The St. Theresienstift am Burgberg was a Catholic nursing home for the elderly, sponsored by the Congregation of the Sisters of Mercy of St. Vincent de Paul (Vincentians) in Hildesheim. There is a chapel on the east side of the home. In 2013 the last nuns left Liebenburg due to a lack of young people, the Theresienstift was closed for economic reasons.

The Evangelical Lutheran St. Trinity Church , located between Martin-Luther-Strasse and Lewer Strasse, belongs to the Goslar Provostry. The parish also includes the kindergarten on the Schäferwiese and the cemetery on the eastern edge of the village.

The council of the Liebenburg community consists of 22 councilors. This is the specified number for a municipality with a population between 8,001 and 9,000. The 22 council members are elected for five years each by local elections. The current term of office begins on November 1, 2016 and ends on October 31, 2021.

The full-time mayor Alf Hesse (SPD) is also entitled to vote in the council of the municipality.

After the local elections on September 11, 2016, the council will be composed as follows:

In addition to a municipal council, there is also a local council that is only responsible for the Liebenburg district in the municipality of the same name. After the local elections on September 11, 2016, it consists of seven councilors and councilors (changes compared to 2011).

Lieselotte Holzhauer (SPD) is the local mayor of the Liebenburg district.

Coat of arms of the community of Liebenburg

With the ten-pass rosette, all connected places are to be represented equally by means of a number symbolism. The tightly stylized castle represents the Liebenburg, which was built around 1292 by Bishop Siegfried II of Hildesheim as a bulwark against the Brunswick dukes. The Liebenburg gave its name to both the actual place and today's large community.

Coat of arms of the village of Liebenburg

The castle silhouette with the three water lily leaves is reminiscent of the village of Lievethe , which has been known since 1131 , later called Lewe - an even older settlement, which in turn gave the castle its name. In addition to the settlement that had grown around the castle, the village of Lewe continued to exist and was only united with Liebenburg in 1937.

Liebenburg maintains partnerships with Saint-Aubin-sur-Mer in Normandy (France) and Friedrichsbrunn (City of Thale ) in Saxony-Anhalt.

Sculpture in the sculpture park on the castle hill

In the terraced grounds of the castle park on the castle hill there is a sculpture park , which the artist Gerd Winner , who lives in Liebenburg , was involved in creating . The sculptures are made of Salzgitter steel .

The voluntary cultural association Lewer Däle Liebenburg eV organizes music, art, theater and cabaret events, which mainly take place in the meeting place "Lewer Däle", a parsonage from the 19th century. Every year in April, the cherry blossom festival is held there.

Liebenburg is of some importance in the history of artistic puppetry . After the war, the writer Rudolf Otto Wiemer founded the Liebenburg puppet shows here . Wiemer's Liebenburger Nativity Play was a popular play material , especially in amateur play circles.

In the towns of Groß Döhren, Neuenkirchen and Othfresen there are local museums that can be visited by appointment.

South of Klein Mahner on a prominent hill is the (severely disturbed) megalithic complex on the Hillah ( Central German Chamber of Liebenburg ).

The mineral water outdoor pool has a 50 m sports pool, a non-swimmer pool, a paddling pool, a diving platform up to 5 m high with a diving pool, a mini golf course and a beach volleyball facility. Part of the Salzgitter golf course is located in the north of the Liebenburg municipality.

The museum association Dampflok-Gemeinschaft 41 096 eV in the Klein Mahner district regularly runs steam locomotives as well as handcar days on the Warnetalbahn .

The Schroederstollen , a former mine tunnel near Klein Döhren, has been exposed and restored by a working group since 2006. Together with a rebuilt section of the narrow-gauge railway , a museum is to be created from this facility. 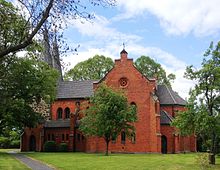 The Liebenburg was made around 1292 medieval castle . There was great destruction during the Thirty Years' War . In the course of time, the structure of the castle had deteriorated enormously, so that after 1750 large parts of the castle were demolished. Of the complex, only the Hausmannsturm on the northern level has been preserved, as well as the remains of two other wall towers of the outer bailey and some sections of the curtain wall . The Hausmannsturm was opened to the public again in October 1991 after a partial renovation.

The Baroque palace, which is now privately owned , with the Catholic Palace Church of the Annunciation was built by Prince-Bishop Clemens August , a Bavarian prince. For this purpose, the remains of the ruins of the Liebenburg that still existed were almost completely demolished between 1750 and 1754. For lack of money - the Seven Years' War had broken out - only the western part of the pleasure and hunting palace with the palace chapel could be completed by 1760 under Prince Bishop Clemens August. In 1766 the castle church, which was only restored after 1650 and renewed from 1710, was demolished, and the castle chapel was also a Catholic parish church.

Since the castle was built in 1292 by Bishop Siegfried II of Hildesheim, the Liebenburg settlement has been the seat of the administration and from 1381 the seat of the court . The officials of the office and the court were housed in the castle, at the beginning of the 18th century on the domain and then in the east wing of the Liebenburg Palace, which was completed in 1815. In 1885 the Liebenburg office was dissolved, and the court moved to Salzgitter in 1959 . There were originally two forest offices, one of which has been retained.

In the old Lewe, on the eastern edge of today's town, is the church of St. Trinitatis , built in 1863 from bricks in neo-Gothic style according to plans by Conrad Wilhelm Hase ; the well-fortified church tower dates back to 1518. The rectory of the church was built in 1846. There is a chapel built in 1935 in the adjacent cemetery.

The historic Liebenburg post mill from the 19th century, once a symbol of the community, was destroyed by fire in May 2012.

In Liebenburg there are several sports clubs that are mainly dedicated to popular sports. It will u. a. the classic field and indoor sports are offered. The "TSV Liebenburg" is a major sports club.

The B 6 runs through the western municipality between Hildesheim and Goslar. The localities of the municipality are accessed by the L 500 and L 510. To the east, the Schladen-Nord motorway junction is located on the A 36 in the immediate vicinity.

The community has no rail connection. The nearest regional train stations are in Salzgitter-Bad, Salzgitter-Ringelheim, Schladen, Vienenburg and Goslar. The former stations of Othfresen and Dörnten on the Liebenburg municipal area on the Hildesheim – Goslar railway line are no longer served, but there have been considerations for many years to set up another stop in Othfresen. There is only occasional museum traffic on the Börßum – Salzgitter-Bad ( Warnetalbahn ) line to the north, and Klein Mahner station is accordingly no longer served by passenger services.

The towns of Liebenburg and the neighboring towns of Salzgitter and Goslar can be reached every hour with the Regionalbus Braunschweig GmbH buses .

A secondary school, the Schule am Schloss, is housed in the Liebenburg school center as a secondary, general education school.

Personalities who have worked in the church

Personalities born in the church

Municipalities in the district of Goslar

Districts of the community Liebenburg