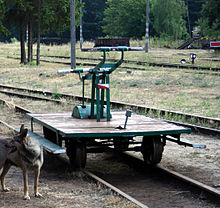 As a draisine , a mostly four-wheeled or three-wheeled railway service vehicle is referred to, which, equipped with muscle or motor drive, is used as an auxiliary vehicle for the inspection of railway lines and for the transport of workers and tools.

Sometimes hand-operated or pedal-powered draisines are rented out to tourists as leisure equipment in order to drive on disused railway lines that have been leased by municipalities and / or private companies.

In 1837, a two-wheeled rail vehicle was invented in Vienna as an auxiliary vehicle for rail workers, which ran on a rail and was kicked off, so it was very similar to Drais's " walking machine " that had been known for twenty years . That is why the name Draisine was adopted for all rail-bound auxiliary vehicles. The mechanically powered vehicle, which was then only established for this purpose, actually goes back to Karl Drais. In 1842 he tested such a vehicle in Karlsruhe with the approval of the Grand Ducal Baden State Railways . The drive took place via a mechanism that the passengers operated with their feet ("rail bike"). Bicycle companies such as Seidel & Naumann also made trolleys. With the increasing speed of the scheduled trains, these vehicles became a disruptive factor and a potential accident risk . Before the First World War , the Prussian State Railways severely restricted their use and prohibited new purchases.

The best known is the hand lever trolley, a design that was particularly widespread among American railway administrations. Standing on a platform, the vehicle is propelled forward by periodically moving a pumping lever-like lever up and down. The power is then transmitted to the wheels via a crank arm . This guy was and is a widely used prop in American films , especially slapsticks and cartoons . It was in the works of Jules Verne introduced ( Around the World in 80 Days ) , and Edward Gorey is important prop in the comic The Willowdale Handcar . 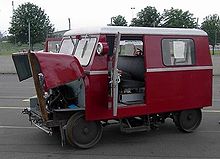 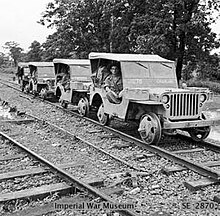 Initially, the draisines were used to maintain the routes, e.g. B. by route keepers . With the introduction of electrical operation, motorized trolleys were popular for making repairs to the overhead contact line . For this purpose, they were the ideal traction to bring the so-called roller ladders as well as light material in place. Later the draisines were mainly used for simple, light services. Among other things, they were used to distribute the wage bags to the marshals. In recent times, mainly motorized trolleys have been used. In this context, road vehicles were often converted to rail vehicles. This solution was often observed in simple operating conditions abroad. In Southeast Asia in particular , many jeeps were converted into so-called jeep engines during the Second World War . Often there were entire series that were specially built for railway service purposes.

Draisine for route inspection and worker transport in Namibia 2017

There are different types and designs of motorized trolleys. However, at least in Germany and Europe, they are not railcars in the sense of public passenger transport on a railway line, since draisines are auxiliary vehicles in terms of design and operation and not fully-fledged railway vehicles according to the Railway Construction and Operating Regulations (EBO). 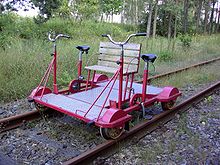 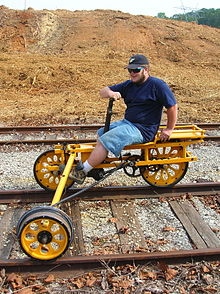 Three-wheel draisine, as is common in North America

In Europe, in several countries, disused railway lines for tourism are used with bicycle carts. In Germany, the first trolley line was opened in 1996 in the Uckermark between Templin and Fürstenberg / Havel . In 2009 there were 30 routes with around 450 kilometers of rail that could be traveled by draisine. As a rule, trips are offered in the rental business on disused railway lines. The vehicles offer hand-lever trolleys (e.g. at the Ratzeburg cultural station , in the Aartal and at the Mellensee adventure station ) and simple bicycle trolleys ( e.g. in the Glantal ). Since 2012, electric-assisted draisines have also been used on various routes.

The vehicles used are predominantly very simple constructions. A technical new development of a draisine, however, was presented in 2003 in the Reutlingen district by a vocational school. The vehicle is equipped with 6 seats and has a seven-speed gear hub . It was used on the Ostertalbahn in 2006 and on the Rosseltalbahn in 2007 . In contrast to existing routes, a trained vehicle driver accompanies the passengers, since it is a railway route that is maintained according to EBO.

For the Glantal (Rhineland-Palatinate), positive effects for tourism in the region could be determined after the introduction of the trolley line. In Switzerland, a few draisines have been preserved, but it is becoming increasingly difficult to find tracks that are suitable for use (especially with passengers ). In the Surental in Lucerne, on the almost nine-kilometer-long Sursee-Triengen Railway , a restored trolley (formerly the Swiss Federal Railways ) has been to be found from time to time since 2005 and can be rented by groups of up to eleven people.

From 2010 to 2012, the section between Bischhausen and Waldkappel of the Leinefelde – Treysa railway line was used with trolleys. This was the only route on which the draisines had priority over road traffic, as the level crossings were technically secured.

Since 2011 there has also been a bicycle trolley in Wuppertal, which was designed and built by the trainees from Schaeffler (FAG) from Wuppertal. A special feature of this vehicle is the switchable gearbox, which was specially developed to be able to drive both forwards and backwards without great effort or difficulty.

For some years now, for example, German Draisinentage and German championships in draisine driving (in various disciplines) have been held. There is also a World Draisine Championship .

On the Liliputbahn Prater in Vienna , scouts have been organizing the world's craziest draisine race every year since March 2009 . Up to 16 teams of two with a minimum age of eight pilot self-made hand-lever trolleys on a 381 mm track width as part of a carnival parade .