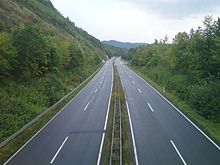 The development of the B 243 is structured as follows: 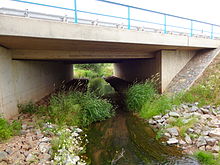 The B 243 crosses the Röstegraben

The paved Kunststraße ( Chaussee ) between Seesen and Osterode was built between 1785 and 1795 as an extension of Frankfurter Straße and called Thüringer Straße .

The national highway 243 between Hildesheim and Nordhausen was around 1937 established. It was interrupted by the division of Germany and has only been continuously passable since November 18, 1989 , when a border crossing was established between Nüxei and Mackenrode . In the GDR , the section between Mackenrode and Nordhausen was called Fernverkehrsstrasse 243 . 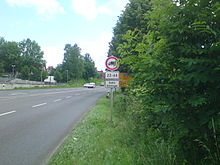 The expanded B 243 in Herzberg, direction Nordhausen

The section between Seesen and Barbis was expanded like a motorway in 1979 due to the distribution function in the southern Harz region . After the fall of the Berlin Wall and the resulting increased volume of traffic, the “yellow motorway” (“Westharz Schnellstraße”) was extended to Steina in 2014 (see expansion plans ). During major changes, the federal highway was connected to the A 38 in 2012 (see expansion plans ). The former route continued to the B 80 near Nordhausen.

The original routes have been downgraded to the following roads:

In addition, the A 7 runs parallel between Hildesheim and Seesen - especially in the Bockenem – Seesen section. In spite of the low traffic importance, this route section has not (yet) been downgraded.

The federal highways 27 and 243 at the end of Herzberg in the direction of Braunlage or Großwechselungen. The truck toll sign has just been installed at the beginning of the motorway-like road.

Since 2015, a truck toll has been levied on the sections of the Schlackenmühle (B 64) - entrance Herzberg, exit Herzberg - AS Barbis and AS Bad-Lauterberg-West - AS Steina, which are designated as motorways . This section is part of the abbreviation between the motorways 7 and 38 and is a 60-kilometer abbreviation. However, there is no toll on the approximately 500-meter-long section between the Barbis junctions and the Odertalbrücke.

The B 243 is to be relocated or expanded to four lanes between the Barbis junction with the B 27 and the major swaps junction of the A 38 . This is done so that the towns are relieved of the through-traffic.

The diversion used during construction shortly after the opening

The VKE II is a 8.6 km long bypass . It begins at the junction with the B 27 (AS Bad Lauterberg West) and ends shortly before Nüxei. Important parts of this section include the Winkeltalbrücke (650 m) and the Odertalbrücke (528 m). In addition to the valley bridges mentioned above, six underpasses as well as an overpass and a pedestrian and bike path bridge were built. In addition to the above measures, a total of 2.2 km long connections were built.

The planning approval decision was issued on December 30, 2005, and construction began on October 30, 2008. Completion was initially planned for autumn 2012, but was delayed until the beginning of September 2014. The construction of this traffic unit was estimated at 60.2 million euros, but most recently cost 98 million euros. Enak Ferlemann and Daniela Behrens officially opened the doors to traffic on September 5, 2014 at the level of the pedestrian bridge ("Lau2").

Traffic unit V (connection to the A 38)

A 9.8 km long three-lane route is to be built around the localities of Günzerode and Holbach, starting at AS Mackenrode up to the existing AS Großwechselungen-Nord. This runs south of the current route. There has been a building permit since September 10, 2018, and construction work should begin after the construction work on the Mackenrode bypass has been completed.

The VKE V begins on the (former) Kreisstraße 4 north of Großwechselungen. There are five bridges in this traffic unit (total length: 109.76 m). It runs east of Großwechselungen in the direction of the A 38. There it meets the A 38 in a triangle (left-hand trumpet). It is designed like a motorway (road cross-section RQ20). This 3.5 km long traffic unit cost 19 million euros. Also included was an approximately one kilometer long connecting road (RQ11) from the old federal road via the junction to the K 4 north of Großwechselungen. This is the feeder to the new expressway and therefore also a federal road until the Günzerode bypass is built. It also replaces the old connection B 243 – Großwechselungen (K 4 and L 2068 (today's K 31 )), which ran in parallel.

After all construction phases have been completed, only the city of Herzberg will continue to be burdened by a through-town drive on the B 243, which will then be built without intersections between A 7 and A 38. No decision has yet been made about the route for this bypass, which has yet to be implemented. This delay in planning is not least due to resistance from Herzberg himself. In the course of the preparation of the next federal traffic route plan, the city of Herzberg asked for the bypass to be classified as an urgent need. This is supported by the district of Osterode. A 4-lane route without hard shoulder is planned.