This article describes the federal highway 191 in Germany. For the street of the same name in Austria see Liechtensteiner Straße .

The road between Ludwigslust and Parchim was expanded into a Chaussee in 1845 . A year later road construction was continued as far as Lübz . The Elbe bridge in Dömitz was opened in 1936 (and destroyed in 1945). Since 1937 Reichsstrasse , on May 2nd and 3rd, 1945, the road was of decisive importance for the end of the war in southern Mecklenburg . During the division of Germany , it was interrupted by the inner-German border . The western section between Celle and Dannenberg (Elbe) belonged to the Federal Republic of Germany as federal highway 191 . The eastern section between Dömitz and Plau am See was trunk road 191 (F 191) in the Schwerin district of the German Democratic Republic .

Immediately after the German reunification , the construction of the 970 m long Elbe bridge in Dömitz began . The federal road has been continuously passable again since 1992. In the course of the opening of the A 14 between the Schwerin junction and the Grabow junction, the federal road between the A 14 and the A 24 at Neustadt-Glewe was downgraded to the state road 073 at the beginning of 2016 . 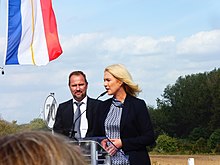 In 1990 Dietmar Villwock founded a citizens' initiative for the northern bypass of Plau. Construction began with the groundbreaking ceremony by Rainer Bomba on March 16, 2017. The 2.7 km long bypass includes bridges over the Elde and the (currently unused) railway line Güstrow – Meyenburg . The federal government invested 11.4 million euros. The bypass road with a permanent no-overtaking ban was inaugurated on September 20, 2018 - seven months before the planning date - by Stefan Anker, Enak Ferlemann and Manuela Schwesig .

As with the Parchim – Ludwigslust , Ludwigslust – Dömitz and Dannenberg – Uelzen railway lines (and the Dömitz bridge over the Elbe ), the geostrategic importance of the road lies in the connection between Mecklenburg and Lower Saxony and western Germany .

Dilapidated high street on the B 191 near Lutheran