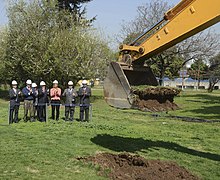 The highest representative of the client or a celebrity, mayor, minister etc. breaks the ground; often several people in charge are involved at the same time (each with a spade). The festival is an event with invited guests, similar to the laying of the foundation stone , the topping-out ceremony , the inauguration or the handover with a ceremonial cutting of a ribbon. On this occasion, speeches are given and sometimes a ceremony follows, for example in a marquee. The press is also present on this occasion.

Sometimes this event was instrumentalized for political purposes, for example by starting construction projects before local elections , although it is foreseeable that it will take a long time before construction actually begins. A prominent example of this is the groundbreaking ceremony for Dresden's Waldschlößchenbrücke on November 29, 2000 (half a year before the city council election, regardless of the plan approval that failed at the time ) by the then Mayor Herbert Wagner . The actual construction began on November 19, 2007.

In the past, people used a spade , hoe and shovel to dig a building pit and actually started with a groundbreaking ceremony. Today the spade has only symbolic meaning, as excavators usually continue the work. The actual start of the construction work is often earlier, as the preparatory work has already started or the schedule of the invited guests forces the ceremony to be postponed. Depending on the different technical means with which the first staged construction operation is carried out, there are now also “first ramming hits”, “first digging bites” and the like. There can also be a symbolic act at the beginning of a renovation. B. removed the first stone from a wall. When rebuilding railway systems, a track yoke is often cut off and excavated with a crane.