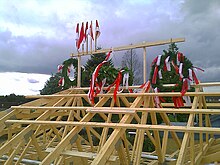 The topping (also Bauheben , consecration hard , lifting hard , Hebfeier , Hebauf , Hebweih , Hebmahl , First beer , premium hard or bat feast ; in Austria topping-out ceremony , First Party / Depth Rating or topping ; in Switzerland Topping , Low German window Beer ) is celebrated when the shell of a Building completed and the roof structure erected or the roof erected. A topping-out ceremony always takes place on the construction site and during working hours so that everyone can take part. For houses without a roof, a “ ceiling party ” is sometimes celebrated instead , and a button party is also conceivable for renovation work on historical towers .

The topping-out ceremony can be traced back to the 14th century. The custom goes back to ritual forms of interest payment and compensation for work that were not unusual in the Middle Ages. The festive gatherings that were held at the end of the individual work must be viewed as legally binding symbolic acts, for which the contact between the subject and the authorities was characteristic. In this sense, the topping-out ceremony is related to the harvest beer or harvest festival .

Course of the topping-out ceremony

The roof is decorated with the topping-out wreath (also called topping-out crown ) or the topping-out tree and one of the carpenters or the foreman gives a short speech, the topping-out speech or carpenter's speech . The verdict is on the one hand a thank you to the architect and builder , and on the other a request for God's blessing for the house. Traditionally, the speaker is given wine or schnapps to drink to the welfare of the homeowner, and at the end of the judgment he throws the glass off the roof. If it shatters on the ground, everything will be fine, if the glass remains intact, this is considered a bad omen and a disgrace for the thrower. The client still has to drive in the last nail, sometimes the carpenters play a little trick on him here.

Following the verdict is celebrated, the so-called sword mouse or lifting feast usually takes place on site. The client organizes the festival, which is thanks to the craftsmen involved. In the 15th and 16th centuries, drinks and food were also part of the craftsmen's wages at the beginning or end of a construction phase. In addition to the craftsmen, all other helpers, neighbors and a representative of the property developer are invited to the topping-out ceremony. It is also an opportunity to show friends and relatives the progress of construction .

In the past, the topping-out ceremony was designed a little differently. The client also had to drive in the last nail, but the rafters in question had initially been kept hidden by the craftsmen. Then the carpenters negotiated with the client about the amount of beer to be delivered to the festival before the builders revealed the secret of the beam. The client then hammered in the nail, was then placed on the rafters and carried around the new building three times before the boozy celebrations began.

The name Richtfest derives from the expression erect or erect , which is used to describe the erection of the roof structure. Therefore, the topping in German-speaking Switzerland is also topping out .

The Austrian name Dachgleiche expresses that both sides of the roof have become the same height.