Topping-out crown for the new synagogue on St.-Jakobs-Platz in Munich 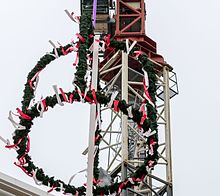 The topping-out crown , also known as a topping- out wreath, consists of a wreath with four attached brackets and is tied from straw or other suitable shrubbery, for example fir branches. It is similar to the harvest crown . A wire or wooden structure often serves as a support frame. It serves as a sign of completion of the shell and is attached to a massive beam at roof height.

Topping-out crown in the coat of arms

In special cases the crown is held in position with a construction crane. This is done in buildings without a roof, such as industrial buildings. The topping-out ceremony , also known as the raising of the house, is the occasion to raise a crown. The topping-out of the carpenters, the Hillibilli, is given by striking a hammer in a fixed rhythm on a board or beam. Originally, the chopping of wood was used to call out those involved in the construction together. The crown is also adorned with brightly colored fluttering ribbons. If the client was stingy when it came to hosting the topping-out ceremony, herrings were tied to the Krone.

At the time of the GDR there was a topping-out crown monument in Berlin , Allee der Kosmonauten.