This article describes the Bundesstraße 67 in Germany. For the street of the same name in Austria see Grazer Straße .

The federal road 67 (abbreviation: B 67 ) leads from the city of Goch , near the Dutch border, eastwards, crosses the Rhine and leads via Bocholt to Borken . From here it continues to the A 31 AS 34 Borken. It ends a few kilometers further east and turns into state road 600 from Reken to Dülmen . The continuation to the A 43 near Dülmen is under construction.

The road from Münster to Emmerich was built in 1861.

Bundesstrasse 67 was extended to Goch in autumn 1967 after the Rees-Kalkar Rhine bridge was built .

New construction of the line between Bocholt and Dülmen 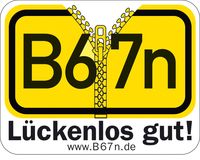 Logo of the initiative B 67n

The section east of Borken was built in the early 1980s as the B 67n. The old route between Borken and Gescher was downgraded to the state road (to Velen L 581, then L 829). The stretch between Gescher and Nottuln now forms part of the B 525 .

On December 17, 2006, the section from Bocholt to Rhede was opened on a new route. The new route routes the traffic around the Bocholt city center, which relieves the inner-city traffic in Bocholt and Rhede.

After various delays, the new connection between Rhede and Borken was finally opened to traffic on November 16, 2010 and then also designated as a federal road on January 1, 2011. This means that the B 67 between Bocholt and Reken (east of the A 31 ) has been developed as a three-lane motorway. It now bears the designation B 67 on the entire section. The old route has also been downgraded to the state road L 581 here.

So that the connection to Dülmen can actually be completed after more than 40 years of planning and discussion, an entrepreneurial initiative ( Initiative B 67n ) has been formed under the leadership of the IHK North Westphalia , which is campaigning for its completion and for this among the population Target advertises. With the start of construction of the last section of the B 67 between Reken and Dülmen, the initiative dissolved after reaching its destination on December 31, 2018.

The construction of the last section between Reken and Dülmen began on September 17, 2018. The entire project, including the B474n, is expected to be completed in 2023.