This article describes Bundesstrasse 8 in Germany. For the street of the same name in Austria see Angerner Straße .

The German federal highway 8 (abbreviation: B 8 ) begins at the Dutch border in Elten near Emmerich am Rhein , crosses the federal states of North Rhine-Westphalia , Rhineland-Palatinate , Hesse and Bavaria from northwest to southeast and ends in Passau . It runs essentially parallel to the A3 . In Austria , the route will continue as Nibelungen Straße (B 130) to Hartkirchen (near Linz ). The federal highway 8 has a length of 689 kilometers.

The federal road 8 runs largely along the historic Via Publica . A section used to be called Cölnische Hohe Heerstrasse and Geleitstrasse not only an important trade route between Cologne and Frankfurt am Main , but also a pilgrimage route between Cologne and Marburg , which was designated as the Way of St. James in 2007 . The "Cölnische Strasse" was first mentioned in 812 as "Werisdorfer Strasse".

Expansion to Chaussee in the 18th century

In 1750, the expansion of the road to Chaussee began on the section between Kitzingen and Markt Bibart . A few years later, the subsequent route from Kitzingen to Würzburg was expanded into an art route. This section, built between 1764 and 1766, led between Gerbrunn and Biebelried on a large dam with several bridges through marshy terrain. Due to static problems on the stone bridges, the route was abandoned in 1770 and a new road was built via Rottendorf . The remains of the former road over Gerbrunn can still be admired today as a technical monument ( Römerbrücke ). The Würzburg – Bischbrunn-Oberndorf section, at that time still via Lengfurt, was expanded by 1775.

The road from Frankfurt to Limburg an der Lahn was also expanded into a Chaussee between 1768 and 1780. The section between Aschaffenburg and Bischbrunn-Oberndorf (Spessarter Chaussee) was redesigned and expanded between 1777 and 1885. The section between Frankfurt and Königstein was not expanded due to political differences. Instead, in 1819 Königsteiner Strasse between Königstein and Frankfurt-Höchst was expanded into an art street. This route ran within the Duchy of Nassau and enabled a journey from the Taunus to the Main without crossing the state border that separated the Duchy and the Free City of Frankfurt . This route via Höchst remained in place until the Höchst bypass, opened in 1934.

The Bavarian state roads were numbered according to their starting point:

With the original numbering in 1932, the long-distance road, later Reichsstraße  8, also ran from Emmerich to Passau. After the annexation of Austria , this road was extended to the Slovakian state border near Pressburg on April 1, 1940 as part of the standardization of the road system .

As early as 1938, the historic route was replaced by a few bypass roads. In Kitzingen a bypass road with a new Main Bridge was built, in Regensburg the Adolf Hitler Bridge, which was named until 1945 (today: Nibelungen Bridge ) was built to relieve the stone bridge and opened on June 18, 1938.

In the area of ​​the city of Limburg an der Lahn ( Frankfurter Strasse ), the road was carried out through the Schiedetunnel under the Lahn Valley Railway .

In the north of Düsseldorf, the old B 8 was gradually replaced by a motorway-like road. The section between the Kaiserswerth junction and Froschenteich was completed in June 2009. The last section of the motor road between Froschenteich and the Duisburg-Süd junction with the A 524 / A 59 / B 288 has been approved since mid-2012. The new Duisburg-Süd motorway junction , which replaces the old junction and connects the B 8 directly with the extended A 524, was implemented in four stages and fully released on November 25, 2014.

Until the opening of the Schanzlbrücke in 1970, the B 8 in Passau ran through the Bahnhofstrasse there and merged with the B 12 at Ludwigsplatz. 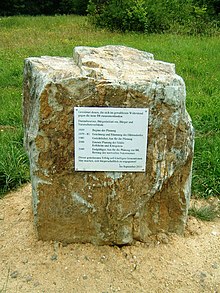 The B 8 ran through the center of the town of Königstein im Taunus . As a first step towards relief, the Königsteiner Kreisel was built in 1958/59 at the northern end of the joint road layout of the B 8 and B 519 and the B 455 intersection. The large two-lane roundabout was decorated with a fountain in the middle. In addition, the inner-city bypass, today's Le-Cannet-Rocheville-Strasse, was built, through which traffic has been flowing since 1972.

The Königsteiner Kreisel has led to long traffic jams for decades. For a long time there were plans to bypass Kelkheim and Königstein in order to defuse this bottleneck. This construction project was politically controversial. While the affected communities supported the measure, environmentalists criticized the environmental impact. In the period from May 5, 1979 until the evacuation on May 12, 1981, the longest successful occupation of the square in the Federal Republic of Germany took place on an embankment that had already been built on the new route planned at that time (at the southern end of the joint road layout of B 8 and B 519 ). For almost two years people lived there in the simplest of conditions in a hut village that was known as the “Damm” and for a long time was a real weekend excursion destination for families from all over the area. The measure is also known as the former A 647 and is listed in the Federal Transport Infrastructure Plan 2003 under “Further requirements” without planning rights, but with a nature conservation planning mandate, ie with a high ecological risk. In December 2009, the Königstein bypass was buried by the South Hesse regional assembly.

In parallel to these plans, since October 2005 the said impounded gyro has been converted into turbines and multi-lane and partly provided with noise barriers. The renovation work was completed in 2010. Traffic lights were also installed to enable pedestrians to cross the streets safely. However, the traffic lights do not regulate the access to the roundabout, as this has led to many accidents.

In Esch to meet federal highway 275 and the national road 8. Due to the topography of the construction of a is bypass consuming. Due to the high volume of traffic, the citizens' initiative “Outside instead of in the middle” is committed to building a bypass road. In the Federal Transport Infrastructure Plan, however, bypassing is only classified as a “further requirement”, ie as a low priority, since it is neither a hot spot for accidents nor a traffic jam.

On the same date, the section between the Dinslaken West motorway junction and Duisburg-Wanheimerort was rededicated to the L 1 (replacement by A 59).

From the Bavarian border near Kahl am Main to Kleinostheim , the B 8 was downgraded to State Road 3308 in August 2013.

On January 1, 2015, the section between Emmerich am Rhein and Wesel was downgraded to Landesstrasse 7; The reason here is also the parallel guidance with the A3.

On July 1, 2016, the section between the B 299 in Neumarkt in der Oberpfalz via the A3 junction Nittendorf through the urban area of ​​Regensburg to the Rosenhof junction was rededicated to state road 2660.

In the area of Düsseldorf Airport , the B 8 is built similar to a motorway. The bypass of the Kaiserswerth and Wittlaer districts was completed in June 2009. The opening of the last construction phase up to the partially completed motorway junction Duisburg- Süd took place on June 1, 2012. The B 8 merges into the A 59 there . Since the completion of the Duisburg-Süd motorway junction, the B 8n / A 59 has been linked to the A 524 , which was extended by around 2.5 km to the west from the previous end of the expansion.

Between Kelkheim-Nord and the A 66 junction Frankfurt-Höchst and between the Erlensee junction and the confluence with the B 43 , the B 8 is also built similar to a motorway.

From the A 3 junction Aschaffenburg-West to Aschaffenburg , the road is built like a motorway and is partially designated as a motor road.

Between the Greinberg junction in Würzburg and the Rottendorf driveway to the A 3 , the road has four lanes and no intersections and is closed to bicycles and mopeds .

Between Langenzenn and Fürth , the B 8 is a motorway-like motorway and is known as the south-west bypass.

Between Vilshofen and Passau , the federal highway 8 runs for a good four kilometers in a very confined space parallel to the Regensburg – Passau railway line between the right bank of the Danube and the foot of the Löwenwand . Here the main road no longer meets today's standards, so that despite regulations (no overtaking, speed restrictions) serious accidents can be complained about. In particular, when visibility is poor or road conditions in winter, road users of different road widths and curve radii are fatal.

The B 8 ends in Passau at the south-western access ramp of the Schanzlbrücke and joins the B 12 there . The following course of the road to the Upper Austrian Nibelungen Straße (B 130) is a section of the Bavarian state road St 2125 . Originally, this section was also supposed to become part of the B 8, but could never be rededicated due to the bottleneck in the Passau Innstadt .

Since the B 8 runs largely parallel to the A 3, it has been used by truck drivers as an alternative route since the introduction of the truck toll .

Between Straßkirchen and Osterhofen, the B 8 was closed to trucks over twelve tons as the first alternative toll route to the parallel A 3 Nuremberg – Passau since June 2006. Since summer 2006, the section between Enzlar (district of Markt Bibart ) ( B 286 ) and Neustadt an der Aisch as well as the section between Nittendorf and Regensburg has been closed to truck traffic . The blockage between Nittendorf and Regensburg was lifted in September 2011 due to a pending legal dispute before the competent administrative court (as of November 11, 2011).

Between Nuremberg and Fürth

In Nuremberg, the B 8 runs in the area of Fürther Straße parallel to the former route of the Ludwigseisenbahn , which is considered the first railway in Germany . Then in the direction of Fürth, the B 8 crosses the "Frankenschnellweg" ( A 73 ) at the city limits , which was built on the former route of the Ludwig-Danube-Main Canal . In Fürth, Nürnberger Straße forms the B 8, until 1988 even the narrow Gustavstraße was still part of the federal highway and thus one of the busiest streets in Fürth. The Nürnberger / Fürther Strasse was initiated under Prussian administration by Karl August von Hardenberg and completed in 1804.

In 2006, the B 8 in Siegburg led across Europaplatz, which was thus a federal road and a pedestrian zone at the same time.

The Michaeliskirchweih takes place every year directly on the main road in Fürth . Therefore, the street in this area is closed for about two weeks at a time.