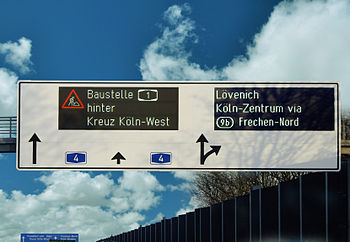 VBA on the A4 near Cologne in Germany

The term traffic control system ( VBA for short ) is usually used for technical facilities on motorways and expressways that were set up by the operator of the road (road maintenance company) in order to control the flow of traffic on one or more sections, at junctions or in the entire network through collective influencing improve. Traffic control systems are traffic engineering systems for traffic management purposes . 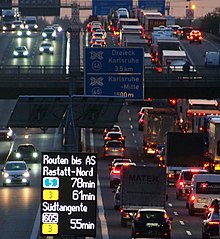 The following types of traffic management systems are used: 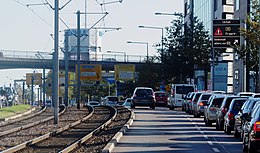 Prism signposts and a light panel with an accident notice

Traffic management systems are made up of the following subsystems:

The effectiveness of traffic control systems has been tested and confirmed in the course of many investigations and studies. It was found that the number of accidents on accident-prone routes could be reduced by 20 to 30% with the help of route control systems, depending on local conditions. Furthermore, route control systems lead to a stabilization of the flow of traffic (reduction or even prevention of congestion), especially when there is a high volume of traffic. The capacity increase achieved in the section is around 5 to 10% (compared to similar sections without VBA).

Network control systems show a similarly positive balance. With their help, it is possible, depending on the road network, to divert up to 15% of the total traffic to alternative routes. In this way, the traffic load on the original route can be reduced and the traffic quality can be improved.

The further development of systems for influencing and controlling traffic is a priority of the German government in terms of transport policy. An overview and a list of existing and planned traffic control systems can be found in the “Road Traffic Telematics Project Plan 2015” at the Federal Highway Research Institute . 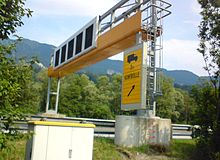 In Austria, around 800 kilometers of driving direction - 19 percent of the entire network - can be controlled using VBA. For example, the most important transit routes are equipped with traffic control systems. These include the West Autobahn A 1 (VBA Umwelt), the Tauern Autobahn A 10 (VBA Umwelt), the Inntal Autobahn A 12 and the Brenner Autobahn A 13. Further VBAs are installed on the following motorways and expressways:

In addition to the VBA that is already in operation, further systems are planned or under construction in Austria. Rough plans already exist for the cities of Graz , Salzburg and Linz .

In Poland , the construction of systems for traffic management and traffic control is increasing continuously. The first systems were installed as part of the toll preparation on the sections of the A4 motorway from Wroclaw to Gliwice (160 km) and the A2 motorway from Konin to Łódź (103 km) in 2010. Furthermore, the entire stretch of the A8 motorway and the S69 expressway were equipped with modern traffic control systems.

The "National System of Traffic Control " ( Krajowy System Zarządzania Ruchem , KSZR) for motorways, expressways and national roads is to be created by 2014. The tasks of this system will be to monitor traffic flow, weather conditions, the state of maintenance of roads and accidents, and consequently manage the situation on the roads, provide information about traffic conditions and direct traffic to detours. Based on measurements from weather stations, the system will display warnings for drivers on the systems. There will be reports of a slippery surface, cross wind, fog or accident. In addition, the speed limit is displayed on the systems, which will vary depending on the driving conditions. This system should cost a total of 500 million zlotys . The most important roads in the country are to be equipped with traffic management systems by 2016.