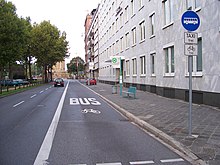 Example of a bus lane with clearance for cyclists and taxis

Indication of the beginning of a bus lane in Lublin

A bus lane or special bus lane (colloquially and technically obsolete also known as bus lane , bus lane or special bus lane ) is a special, occasionally structurally delimited lane on the roadway , the use of which is only permitted for buses or trolleybuses in regular service . Notwithstanding this rule, additional signs can also authorize the use of occasional buses (e.g. coaches ), taxis , bicycles and electric cars . This release can also be limited in time, for example only outside of rush hour . A bus lane is an entire lane that can only be used by regular buses, and possibly also by taxis, cyclists or electric cars.

The aim of establishing bus lanes is to be able to transport as many people as possible in a short period of time on heavily used routes in metropolitan areas (such as large cities ). This is achieved by granting the priority of the local public transport (PT) against the motorized individual traffic (HIV), including by special traffic lights, Busschleusen or even special traffic lanes. The bus lane is marked by appropriate traffic signs and lane markings on the road. In this way, the buses should be able to travel to the timetable as far as possible, unhindered by slow traffic. Occasionally, buses are also allowed to drive on roads that are completely closed to individual traffic or in one direction of travel. Bus lane run occasionally on an appropriately fortified roadbed of the tram . Other special cases are completely eigentrassierte Bus Rapid Transit - and guided bus systems.

In addition to the shared use of separate areas for trams by public buses, the first special lanes were set up especially for public buses in Wiesbaden in 1968 by the graduate engineer Rolf-Werner Schaaff, who, as chief construction director, was also head of the state capital's office for transport. After initial skepticism and legal problems, the project met with interest at home and abroad.

A short time later, in 1970, the city of Berlin also began to set up bus lanes.

At that time the bus lanes lacked a legal basis in the StVO , this only changed with the amendment of the road traffic regulations on March 1, 1971, in which the introduction of bus lanes was expressly provided for. Delegations from many countries (among the first Japan) studied the advantages on site and then set up bus lanes in their own country.

In Austria, the first bus lane was opened on Technikerstraße in Innsbruck at the end of 1988.

Bus lanes with clearance for other road users

The vehicles or types of transport (e.g. taxis and cyclists) expressly identified by the additional sign may also use the bus lane. According to studies in Münster and experience reports from other cities, the shared use of bus lanes by cyclists is largely unproblematic if the width is either narrow (3.00–3.25 m) or sufficiently wide for overtaking within the bus lane (> 4.75 m) ( see literature).

In Upper Austria in 1998 an existing bus lane was also released for cars with three or more passengers in the municipalities of Puchenau and Linz . This would save around 270,000 euros in economic terms from 60,000 man-hours of driving time and a reduction in CO 2 emissions .

On January 9, 2019, the city ​​of Düsseldorf decided to introduce two environmental lanes in Merowingerstraße and Prinz-Georg-Straße to prevent diesel driving bans as far as possible. These can be used by buses, taxis, bicycles and electric cars .