This article describes Bundesstraße 47 in Germany. For the street of the same name in Austria see Lundenburger Straße .

The federal highway 47 (abbreviation: B 47 ) is a federal highway running in west-east direction from the A 6 near Wattenheim in Rhineland-Palatinate to Walldürn in Baden-Württemberg to the B 27 . It leads through the Upper Rhine Plain and the Odenwald .

The federal highway 47 in Worms

The B 47 starts in Rhineland-Palatinate in the district of Bad Durkheim on the northern edge of the Palatinate Forest in the north of the Watt home located junction "Wattenheim" the Bundesautobahn 6 . At the beginning, the main road - leaving the nature park - runs north via Hettenleidelheim in the Donnersbergkreis to Eisenberg , where it crosses the Eisbach valley. Further to the north, it passes Kerzenheim to the west, touches Göllheim to the west and passes Dreisen to the east, where there is a connection to the A 63 (junction “Göllheim”). Parallel to this motorway and the Pfrimm , the B 47 runs north-northeast to Marnheim , where it passes a remnant of the Pfrimm Valley Viaduct .

From Marnheim the B 47 in the Zellertal continues along the Pfrimm to the east to reach the community of Zellertal via Albisheim . In the subsequent district of Alzey-Worms , it leads through Wachenheim to Monsheim , where the B 271 crosses and the B 47n (new) branches off the old federal road, both routes running through the area of ​​the independent city of Worms :

After the re-confluence of the B 47n, which is currently still in the center of Worms, the federal road after Kreuz the B 9 runs directly east of the city on the Nibelungen Bridge - leading through the old bridge gate tower Nibelung Tower - over the Rhine , where it crosses on the bridge to South Hesse .

In Hesse , the B 47 enters the Hessian Ried or the Geo-Naturpark Bergstrasse-Odenwald immediately after crossing the Rhine . It leads in the Bergstrasse district through Rosengarten , a north-western district of Lampertheim , and then south past Bürstadt , where it crosses the B 44 . After the subsequent Lorsch forest, it crosses the federal motorway 67 north of Lorsch (junction "Lorsch"), after which there is a connection to the B 460 and the Weschnitz is bridged. A little further to the east, the A 5 (junction "Bensheim") is bridged at Bensheim , where the B 3 or Bergstrasse crosses.

East of Bensheim, the B 47 in the Lauter valley leads in a steady gradient through several parts of the municipality of Lautertal into the Odenwald to the southwestern slopes of Raupenstein and the Buch up to a peak height of 447 meters at the beautiful view between Kolmbach and the Lindenfelser settlement Litzelröder . Then it goes winding and steadily downhill via Lindenfels to Gumpener Kreuz , the 273 meter high saddle between the Weschnitz and Gersprenz valleys where the road joins the B 38 coming from the south . The road then turns to the northeast and leads along the Mergbach to Reichelsheim in the Odenwaldkreis . Behind Beerfurth , the road reaches a low point in the Gersprenztal at 190 meters and then branches off from the B 38 in the direction of Michelstadt . On the northern slope of the Morsberg , a winding slope leads over the 385 meter high Spreng , the transition between the Gersprenz and Mümling valleys above Langenbrombach . South past the municipality of Brombachtal , the road descends via Rehbach and Steinbach to Mümling near Michelstadt, which is 200 meters high. Between Steinbach and Stockheim , the B 47 joins the B 45 in a southerly direction for a short distance . It then branches off in an easterly direction and climbs past Dorf-Erbach to the north through dense forest up to a peak height of 515 meters near Eulbach, which is on the Bavarian border .

In Bavaria , the B 47 goes from Boxbrunn to Amorbach in the Miltenberg district in Lower Franconia , continuing through the Bergstrasse-Odenwald Geo-Nature Park and the Odenwald . At the bridge over the Mud near Amorsbrunn , the federal road 469 branches off to Miltenberg and into the Main Valley , while the B 47 leads to Schneeberg and leaves the state of Bavaria a kilometer further east.

Then the B 47 crosses to Baden-Württemberg and thus into the Neckar-Odenwald district in order to run through the Marsbach valley in the Neckartal-Odenwald nature park and end at the eastern edge of the Odenwald in Walldürn with a connection to the B 27 .

The B 47n is a bypass built as a motor road , which leads south to Monsheim, the western Worms district of Pfeddersheim - crossing the A 61 at the junction "Worms" - and past the Worms core city. In the opposite direction, the old road runs through Monsheim and Pfeddersheim (where it is spanned by the Pfeddersheim viaduct ) and then leads through Pfiffligheim and downtown Worms.

The section between Pfeddersheim and the city boundary Worms with two separate carriageways expanded (four lanes). The section between city boundary Worms (Kolpingstraße) and the junction with the B 9 is re-created and also with two separate carriageways expanded (four lanes). Both roads converge at the B 47 / B 9 intersection, only to separate again after 2 km at the Nibelungen Bridge in Worms (B 9 towards Mainz and B 47 towards Hesse).

After 32 years of different planning and a number of changes, the last missing piece of the southern bypass (connection Kolpingstrasse - Bundesstrasse 9) went into planning approval . The plan approval procedure was completed in January 2011. In the course of the new building, the already existing preliminary work for the second carriageway is to be expanded.

Course of the Nibelungenstrasse (largely identical to the B 47)

Course of Siegfriedstrasse (partly identical to the B 47)

From Worms to Amorbach, the course of the B 47 is identical to the approximately 110 km long holiday route Nibelungenstrasse , which runs through parts of the aforementioned federal states. From Worms it leads via Bensheim and through the Odenwald to Amorbach, where it branches off the main road to run to the Main via Miltenberg to Wertheim .

From Worms to Lorsch and further east of Amorbach and Walldürn, the course of the B 47 is identical to the approximately 150 km long Siegfriedstrasse holiday route , which also runs through parts of the aforementioned federal states. For example, it leads from Worms to Lorsch, where it branches off the main road. From then on, it runs via Heppenheim and Oberzent through the Odenwald to Amorbach, then runs again identically to the B 47 as far as Walldürn and then continues via Tauberbischofsheim also to the Main to Wertheim.

After the territorial reorganization of Germany by the Congress of Vienna , a large part of the Odenwald belonged to the Grand Duchy of Hesse- Darmstadt. In 1840 the road between Worms, Bensheim , Lindenfels and Michelstadt was built . This street was the first road that crossed the Odenwald in an east-west direction. The section between Worms and Bensheim was given the number 47 when the road was numbered in 1932, from which today's federal road 47 emerged through extensions.

Remnant of the Pfrimm Valley Viaduct 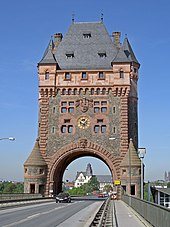 Directly northeast of Marnheim , 50 m south of the B 47, there is a remnant of the railway bridge Pfrim Valley Viaduct , which is also called the Marnheim Bridge or the gate to the Zell Valley .

On the eastern outskirts of Pfeddersheim , the Pfeddersheim viaduct spans a length of approx. 1.5 km and max. The valley of the Pfrimm is 30 m high . The bridge is part of the A 61 between Alzey and Worms .

Sign on the Nibelungen Bridge: "Expansion of the B 47 / B 9 traffic junction and construction of a new bridge over the Rhine - by the end of 2010"

The following projects are currently at the planning approval stage: