Eisenberg (Pfalz) is a city in the northern Palatinate ( Rhineland-Palatinate ). It is located in the Donnersbergkreis , within which it is the largest municipality in terms of population. It is the administrative seat of the association of the same name , to which, in addition to the city of Eisenberg, the independent local communities of Ramsen and Kerzenheim belong. According to state planning, Eisenberg is designated as a medium-sized center.

The name indicates earlier iron production . The mining of clay minerals was even more important and is still the extraction of sticky sand from a loose sediment.

Eisenberg is located in the north of the Palatinate in the southeast of the Donnersbergkreis and is the largest municipality with more than 9,000 inhabitants. In addition to Eisenberg itself, the districts (local districts) Stauf and Steinborn also belong to the urban area, as well as the Abendthal, Erlenhof, Lauberhof, Ochsenbusch, Seltenbach, SOS Children's Village and Eisenwerk residential areas . Neighboring communities are - in a clockwise direction - Kerzenheim, Ebertsheim , Tiefenthal , Hettenleidelheim , Wattenheim and Ramsen.

Eisbach in Eisenberg; in the background Azurit Hansa headquarters and Protestant church

The Eisbach flows through the city from southwest to northeast , and after about 30 km it flows into the Rhine from the left near Worms . In the west of the district, the Ellenbach partially forms the border with Ramsen. The Diebskellerbach rises in the Eisenberg district , while its confluence with the Eisbach is beyond the city limits. On the eastern edge of the city, the latter takes up the Mühlgraben from the left . The Seltenbach runs south-east of the city center and forms the largest part of the district boundary to Tiefenthal.

Eisenberg is the namesake of the Eisenberger Basin , in the west of which the city is located. It is sealed off to the north and east by the southernmost parts of the Alzeyer Hügelland , the Göllheimer Hügelland and the Grünstadter Berg , between which only the Eisbach Valley creates a narrow corridor to the Upper Rhine Plain. The stump forest borders to the west and the valleys of Rothbach and Eckbach to the south , behind which the Leininger spur rises.

The Eisenberg Basin represents a sunken floe of the Buntsandstein . As a result of its formation, the Eisenberg Basin belongs geologically to the Palatinate Forest , but due to the layers of rocks and sands of the Tertiary and Quaternary , the climatic conditions, the topology and the use it is part of the Rheinhessisches Tafel - and hill country .

In the inner area, sticky sands and refractory clays were mined, the mining has had a lasting impact on the landscape there.

The Romans had already settled the city area; In the so-called vicus , some of the excavations that have not yet been completed have been reconstructed, some in a protective structure. This is located on the road that branches off from today's bypass or Roman road to the Seltenbach district. The settlement is presumably identical to the place Rufiniana (Greek Ρουφινιάνα ) of the Germanic Nemeter mentioned by Ptolemy . In the Middle Ages Eisenberg was first mentioned in the 763rd

Like the nearby temporary residence in Kirchheim - from the 19th century Kirchheimbolanden - Eisenberg belonged to the House of Nassau and the Principality of Nassau-Weilburg from the 14th to the 18th century and was under the rule of Kirchheim and Stauf .

From 1798 to 1814, when the left bank of the Rhine was part of the French Republic (until 1804) and then part of the Napoleonic Empire , Eisenberg was incorporated into the canton of Göllheim within the Donnersberg department and was the seat of its own mairie . In 1815, the Palatinate was added to Austria , and a year later it changed as the Rhine District to the Kingdom of Bavaria . From 1818 to 1862 Eisenberg belonged to the Land Commissioner Kirchheim , later Kirchheimbolanden ; from this emerged the district office of Kirchheimbolanden , which was called from 1939 district Kirchheimbolanden .

After the Second World War , Eisenberg became part of the newly formed state of Rhineland-Palatinate within the French occupation zone in 1946. On April 1, 1962, the previously independent community of Stauf, with 294 inhabitants at that time, was incorporated into Eisenberg.

On March 16, 1963, Eisenberg received city ​​rights . In the course of the first administrative reform in Rhineland-Palatinate , the city moved to the newly formed Donnersbergkreis in 1969 ; three years later, the city became the seat of the new association of the same name.

Development of the population of the city of Eisenberg (Pfalz); the values ​​from 1871 to 2011 are based on censuses:

In the 16th century, Eisenberg, which was Protestant at the time, had its own parish, to which the neighboring Hettenheim also belonged. The Evangelicals are part of the Protestant Church of the Palatinate and are subordinate to the deanery of Bad Dürkheim-Grünstadt. The Catholics belong to the diocese of Speyer and are subordinate to the dean's office in Bad Dürkheim . Since January 1, 2016, the Catholic Church has been a branch of the parish of St. Luke in Hettenleidelheim.

There was once a synagogue in the village .

The city ​​council in Eisenberg (Palatinate) consists of 24 council members, who were elected in the local elections on May 26, 2019 in a personalized proportional representation, and the honorary city ​​mayor as chairman.

The French town of Sanvignes-les-Mines in Burgundy and the English town of Baldock in the county of North Hertfordshire are twin towns of Eisenberg.

The castle Stauf , the iron Gienanth and the streetscape of the Wormser Street and Tiefenthaler street are as a monument zones reported.

There are also numerous individual monuments, including the former station building of the train station.

In the Eisenberg district of Stauf there is a 7.5 m high bell tower built in 1984 from stone , which offers two historically valuable bells as well as a 5.7 m high viewing platform from which one has a very good view of the elevations of the Palatinate Forest. The tower replaced a steel bell tower from 1950, which in turn was the successor to a wooden tower built in 1909, in which the older of the two bells was already located. The somewhat larger second bell was cast in 1949 as a replacement for the forerunner that was lost during the war years.

Inside the city center is the stork tower, which is a replica of a watchtower. The Lassmichinruh hunting lodge, built by Nazi politician Josef Bürckel , is located in the west of the district, far from the settlement area .

The west of the city limits lies in the Palatinate Forest Nature Park , which in turn belongs to the Palatinate Forest-Vosges du Nord Biosphere Reserve . With the Helinchen oak to the north of Steinborn and two sweet chestnuts at the Lauberhof, there are two natural monuments within the city . In the south of the city limits there is also the Erdekaut landscape protection area .

The "incorruptible hand" is shown in a showcase in the entrance area of ​​the Protestant church. These are the mummified remains of a human hand, which is linked to the legend of perjury .

In Haus Isenburg , the town's local history museum, numerous finds from excavations from the Roman vicus can be seen, including a copy of the Eisenberg bread stamp found in Eisenberg . The original and other finds are in the Palatinate History Museum in Speyer . From 1978 to 1990 the Gienanth dolls house was also exhibited in the Isenberg house. In the south of the district there is also the Riegelstein Museum and the Roman Park Vicus Eisenberg .

TSG Eisenberg exists on site and offers football and athletics, among other things.

Isenburg was the old name for Eisenberg, and both forms indicate earlier iron extraction; corresponding pits existed in the south of the city limits. Clay was mined on an even larger scale, however , and disused clay pits can be viewed. The visitor mine was closed to make way for the current clay opencast mine , but in the Erdekaut adventure landscape , the ecological consequences of mining are made clear to the visitors.

Eisenberg is the only major industrial location within the Donnersberg district. The Gienanth Eisenberg iron foundry , which was founded in 1735, is the largest company with around 1,300 employees and also the oldest company in town . Another important employer in the city are the Klebsandwerke Eisenberg . In 2010 they were awarded the raw materials management company prize for innovation by the then Rhineland-Palatinate Minister of Economics, Hendrik Hering .

Eisenberg is also the administrative headquarters of AOK Rhineland-Palatinate / Saarland , AZURIT Rohr GmbH and the optics company Delker Optik, founded in 1978 . The former was created because the Health Insurance Southwest originally planned for 2012 had not come into being. The locally based Langhammer Maschinenbau GmbH was taken over by Winkler + Dünnebier in 2008 and renamed W + D-Langhammer GmbH . The Volksbank Alzey-Worms and the trading company JN Köbig have on site per a branch.

Road network in and around Eisenberg

The federal highways 6 in the south (junction 18 Wattenheim , 4 km) and 63 in the north (junction 12 Dreisen , 7 km) can be reached via federal highway 47 , which crosses Eisenberg in a north-south direction . The state road 395 runs in an east-west direction through the area of ​​the Verbandsgemeinde and connects Enkenbach-Alsenborn in the west and Grünstadt in the east as the next larger towns . The state road 396 , which connects Ramsen with Göllheim, crosses the west of the district .

The district road 73 connects the city center with the residential area Seltenbach and the train station Tiefenthal . The district road 74 begins in neighboring Ramsen and leads through the Eisenberg forest area, where it passes the Ochsenbusch residential area and then the border to the Bad Dürkheim district; there it becomes Kreisstraße 35 and ends in Hettenleidelheim. The circuit road 75 binds to the neighborhoods Steinborn and Regenstauf; from this also the district road 76 branches off to Kerzenheim. 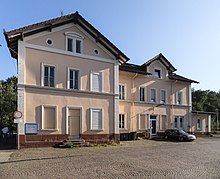 There are bus connections in the direction of Kirchheimbolanden and Kaiserslautern ; the 920 bus operated by Behles Bus is known as the “RegioLinie” and connects Eisenberg with Göllheim and Kirchheimbolanden every hour; Until 2017 she was responsible for Omnibusverkehr Rhein-Nahe . Line 902 creates a connection to Gaugrehweiler . There are also two city bus routes, lines 917 and 918.

The Eisenberg station is located on the 1876 opened Eis Valley Railway and was initially the western end point. After decades of planning, the connection to Enkenbach followed in 1932 . Passenger traffic was initially discontinued in 1976, but was gradually reactivated between 1994 and 2001. The trains run from Frankenthal to Ramsen , on Sundays and public holidays to Eiswoog ; there is a regular service through regional trains.

On the north-western edge of the city center is the Waldhaus Schwefelbrunnen, a hut belonging to the Palatinate Forest Association , which was inaugurated in 1976.

In addition to the Pestalozzi School, which functions as a primary school, there is an integrated comprehensive school, a vocational school and a commercial high school. Due to the increasing number of pupils, a gymnasium upper level was set up at the comprehensive school at the beginning of the 2016/2017 school year. Eisenberg has five kindergartens.

People who have worked in the city