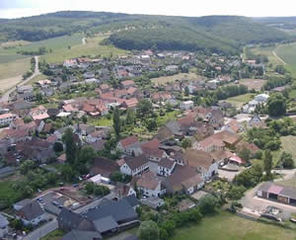 Breunigweiler is a municipality in the Donnersbergkreis in Rhineland-Palatinate . It belongs to the Winnweiler community , within which it is the third smallest local community in terms of population.

Breunigweiler is located in the North Palatinate Bergland on one of the last northern foothills of the Palatinate Forest in the very south-east of the Winnweiler community . Neighboring communities are - clockwise - Börrstadt , Dreisen , Göllheim , Kerzenheim and Sippersfeld

The Pfrimm flows through the village . Within the municipality, it accepts several tributaries such as the Bruchbach and the Sippersfelder Bach . The 345 meter high Petzenberg rises in the south of the district .

Breunigweiler probably originated between AD 600 and 750. The first documentary mention dates from the year 1130, when the Archbishop of Mainz Adalbert I donated goods to the cathedral chapter in Breunigweiler. In 985 Briuningeswilare - as it was then called - was a victim of the Salian church robbery .

Until the end of the 18th century, Breunigweiler belonged to the Stauf rule, which was last owned by the Princes of Nassau-Weilburg .

After 1792 French revolutionary troops occupied the region and annexed it after the Peace of Campo Formio (1797) . From 1798 to 1814, when the Palatinate was part of the French Republic (until 1804) and then part of the Napoleonic Empire , the village belonged to the French department of Donnersberg and was assigned to the canton of Winnweiler . In 1802 the community had 301 inhabitants: 14 Catholics, 251 Lutherans, 13 Reformed, and 23 Jews.

Due to the agreements reached at the Congress of Vienna (1815) and an exchange contract with Austria , the region became part of the Kingdom of Bavaria in 1816 . From 1818 to 1862 Breunigweiler belonged to the Land Commissioner Kaiserslautern ; from this the district office of Kaiserslautern emerged. On December 1, 1900, the community moved to the newly created district office Rockenhausen .

In 1928 Breunigweiler had 283 residents who lived in 65 residential buildings. From 1939 the place was part of the district of Rockenhausen . After the Second World War , Breunigweiler was part of the French occupation zone and in 1946 became part of the newly formed state of Rhineland-Palatinate . In the course of the first Rhineland-Palatinate administrative reform , the place changed to the newly created Donnersbergkreis ; three years later, the community was incorporated into the also newly created community of Winnweiler .

The former church of St. Margaretha was a branch of Börrstadt in 1501 and had the Otterberg abbot as patron saint in 1516 . In 1928, 269 residents were Protestant and 14 were Catholic. On the Protestant side, Breunigweiler forms a church with Sippersfeld and Neuhemsbach with its seat in Sippersfeld, on the Catholic side with Börrstadt.

The municipal council in Breunigweiler consists of eight council members who were elected in the local elections on May 26, 2019 , and the honorary local mayor as chairman.

Until 1972, Breunigweiler formed a mayor's office together with Sippersfeld and did not have its own mayor. 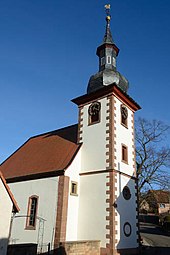 The Jewish cemetery is designated as a monument zone; With the war memorial and the Protestant church, there are also two individual objects that are under monument protection . The Protestant church in the village was built between 1763 and 1766 and was last renovated in 2008.

In the past, the community was mainly characterized by agriculture. After the Second World War, a new building area was built. Meanwhile, Breunigweiler is mainly a residential community. There are several small businesses in the village.

The state road 394 and the district road 44 run through Breunigweiler .

The closest train station was Börrstadt from 1873 on the Langmeil – Monsheim Zellertal Railway, which was completed in the same year . In 1983 passenger traffic was discontinued, so that Langmeil (Pfalz) train station became the next operating point. During the seasonal reactivation in 2001, the Börrstadt train station did not come back into operation. Since 1999 Münchweiler (Alsenz) has been the closest train stop to the Alsenz Valley Railway from Breunigweiler.