This article describes the municipality of Zellertal. Further meanings can be found under Zellertal (disambiguation) .

Zellertal is a municipality in the Donnersbergkreis in Rhineland-Palatinate . It belongs to the Göllheim community .

The wine-growing community of Zellertal, which consists of three districts, is located in the Zellertal valley of the same name between Kaiserslautern and Worms, north of the Palatinate Forest Nature Park and south of the North Palatinate Uplands . It occupies the extreme east of the Donnersbergkreis.

Despite its location in the north of the Palatinate , the Zellertal has a milder climate than the rest of the Donnersbergkreis. It benefits from the fact that it is bordered to the north by a mountain range that prevents or at least mitigates cold air ingress. The orientation of the valley from west to east also guarantees many hours of sunshine per day.

The names of the sub-community Zell and the entire valley go back to the “cell” ( lat. Cellula ) of the local saint Philipp von Zell , who died there in 756 and to whom the Catholic parish church is also consecrated . Every year the Philipps Festival is celebrated in his honor in May; In 2006 the 1250th anniversary of death was commemorated with a large memorial service.

The local community Zellertal was formed on December 31, 1975 from the previously independent communities Harxheim (at that time 714 inhabitants), Niefernheim (188 inhabitants) and Zell (228 inhabitants). The assignment to Göllheim, which was created at the time, remained in place in 1972.

The development of the population of Zellertal in relation to today's municipal area; the values ​​from 1871 to 1987 are based on censuses:

The municipality council in Zellertal consists of 16 council members, who were elected in the local elections on May 26, 2019 in a personalized proportional representation, and the honorary local mayor as chairman.

The local mayor is Christian Lauer. At the constituent meeting of the municipal council in August 2019, he was elected by a majority, succeeding Raimund Osterroth, who was no longer running.

Interior shot of the Catholic parish church of St. Philip

The most famous historical buildings are the former collegiate monastery in Zell , whose roots go back to the 10th century, the Catholic parish church of St. Philipp , a baroque hall building from the 18th century, and the Zellertal war memorial , a monumental building from 1928.

The Philipps Festival in honor of the local saint is celebrated annually on the Sunday after May 3rd, the Park Festival in the Zell district on the fourth weekend in July. 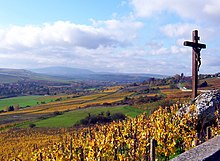 The community belongs to the northwestern part of the Palatinate wine-growing region . The planted vineyards measure about 100 hectares. The most famous wine location is called Zeller Schwarzer Herrgott .

Federal road 47 (Kaiserslautern – Worms) runs through the southern district of Harxheim from west to east . The Zellertal Wine Trail , which runs through the vineyards, touches all three districts .

The single-track line of the Zellertal Railway ( Langmeil - Monsheim ) runs parallel to the B 47 . For the municipality of Zellertal, the stop is in Harxheim. The public transport was set in the 1980s, but excursion traffic has been held since 2001 on Sundays and public holidays in a two-hour rhythm instead.

The TSG 1900 Zellertal played with her table tennis -Damenmannschaft the late 1980s in the 2. Bundesliga .