Winnweiler is the fourth largest local community in terms of population in the Donnersbergkreis in Rhineland-Palatinate and is the administrative seat of the association of the same name , to which it also belongs. Winnweiler is a state-approved tourist destination and designated as a basic center according to state planning .

Winnweiler lies in the Saar-Nahe Hills belonging Nordpfälzer mountains and its partial area Kaiserstrasse sink , alternatively Börrstadter sink called. In the southeast, the community has a share in the northern foothills of the Palatinate Forest . The community is divided into the following districts:

Immediately to the east of the center is the 304 meter high Leisbühl and on the border with Imsbach the 366.2 meter high Eichhübel . In the south-eastern part of the district, the 400.6 meter high Bocksrück stretches along the boundary with Börrstadt and Sippersfeld .

The Alsenz flows through the community in a south-north direction. On site it takes on several tributaries, the Gonbach in the south , the Lohnsbach and the Steinbach within the core town . In the far north the Imsbach flows into the former , which in places forms the border to Schweisweiler. In the extreme south-west, the district also extends as far as the Höringerbach .

The village was first mentioned in 891 as "Winidowilari" (settlement of the Wends). Later, the settlement belonged to the County of Falkenstein for many centuries , then became part of Lorraine and came under the Habsburgs until the French Revolution . During this time it was the seat of the Winnweiler District Office and since 1782 it has belonged to the region of Upper Austria . As early as 1781, a recruiting center for emigrants to Galicia was set up in Winnweiler . In 1797 the suburb of Hochstein , which had belonged to Winnweiler since it was first mentioned in 891, became an independent municipality.

From 1798 to 1814, when the Palatinate was part of the French Republic (until 1804) and then part of the Napoleonic Empire , Winnweiler was incorporated into the canton of the same name . In 1815 the place belonged again to Austria . A year later it was slammed into Bavaria . From 1818 to 1862, Hochstein was part of the Kaiserslautern Land Commissioner , which was then converted into a district office. On December 1, 1900, the community moved to the newly created district office Rockenhausen.

From 1939 the place was part of the district of Rockenhausen . After the Second World War , Winnweiler was part of the French occupation zone and in 1946 it became part of the newly formed state of Rhineland-Palatinate . In the course of the first Rhineland-Palatinate administrative reform , Hochstein was again a district of Winnweiler on June 7, 1969; at the same time it moved to the newly created Donnersbergkreis . Three years later, the city became the seat of the newly formed association of the same name . On June 10, 1979, the previously independent communities Alsenbrück-Langmeil and Potzbach were incorporated.

The development of the population of Winnweiler in relation to today's municipality area; the values ​​from 1871 to 1987 are based on censuses:

The Jewish community once resident there owned a synagogue that fell victim to the November pogroms in 1938 . There is also the so-called Museum Winnweiler - Jewish Museum of the North Palatinate , in which the history of regional Jewry is illuminated.

The municipal council in Winnweiler consists of 20 council members, who were elected in a personalized proportional representation in the local elections on May 26, 2019 , and the honorary local mayor as chairman.

The war memorial near Winnweiler
→ Main article : List of cultural monuments in Winnweiler

The Jewish cemetery , the town center, the castle district, the cemetery, the Eisenschmelz including the Gienanth early industrial park and the main street in the Potzbach district are designated as monument zones.

There are also numerous individual objects that are under monument protection , including the Protestant parish church, the Catholic Church of the Sacred Heart of Jesus and the Chapel of the Cross .

To the east of the village on the Leisbühl there is a war memorial erected in 1933 , in the half-open hall of which a larger-than-life soldier figure and memorial plaques with the names of fallen soldiers commemorate the two world wars. At the north corner of the square building is an attached 12.5 m high stair tower that leads to an 8.5 m high viewing platform above the hall structure. From this a view towards Winnweiler and the surrounding area is possible.

There are a total of four natural monuments on site . It lies at the edge of the conservation area, "Thunder Mountain".

The most famous sports club in the area is the ASV Winnweiler. The club, founded in 1910, rose in the 2014/15 season for the first time in the club's history in the association league , in which it stayed until 2018 . In addition to the first and second men's team, there is also an old men's team, a women's team and several youth teams. The venue for the games is the artificial turf pitch on Rauhen Weg, which was built in 2014 instead of the Rote Erde hard court.

The beer from the local private brewery Bischoff is known in the Palatinate . The company Mobotix develops and manufactures since 2009 their IP cameras in the industrial park Langmeil.

Winnweiler is connected to the national road network via the federal motorway 63 , which runs from Mainz to Kaiserslautern , and the federal highway 48 , which runs from Bingen am Rhein to Bad Bergzabern . The Bingen – Winnweiler section was already a Reichsstraße with the designation R 40 . The state road 390 connects the community with Höringen. The state road 401 leads through Alsenbrück-Langmeil and follows the course of the Kaiserstraße that was laid out under Napoleon . The county road 1 connects the district Potzbach with the core community and Lohnsfeld. The county road 4 leads from Imsbach about Winnweiler until after Höringen and the circuit road 10 after münchweiler an der alsenz. The county road 39 connects Alsenbrück-Langmeil with Sippersfeld.

Winnweiler has a train station on the Alsenz Valley Railway ; this was opened as the northern end point in 1870, before the line to Münster was tied through the following year . The copper smelting tunnel and, until 1970, the Hochstein tunnel, which has since been slit, are also located on the municipal marker . The trains run on the Kaiserslautern - Bingen route .

In addition, there is a train station in Langmeil , which has not been served since December 2006, as demand has fallen significantly due to the better-located train stations in Winnweiler and Enkenbach and since the opening of the Münchweiler an der Alsenz stop in 1999. The Zellertalbahn branches off to Monsheim at Langmeil station, which has since served exclusively as a depot . This route was used again for excursions on Sundays and public holidays in the summer from 2001 to 2016. Here the trains last ran from Monsheim without stopping in Langmeil to Hochspeyer . 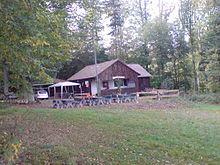 In the west of the district is the Igelborner Hütte operated by the Winnweiler local group of the Palatinate Forest Association . The Alsenz cycle path also runs through Winnweiler . In addition, the community is the starting point of the Pfälzer Höhenweg hiking trail and is located on the Donnersberg-Donon long-distance hiking trail and on one that is marked with a green-yellow bar .

In addition to the Montessori - primary school exists within the community nor the Albert Schweitzer School , which is a "Realschule plus". In addition, there is the Wilhelm-Erb-Gymnasium , a former Latin school . The next university town is Kaiserslautern .

This section needs to be revised: No dates of life of the honorary citizens and no representation since when and why honorary citizens. See also WP: FV / S / P !
Please help to improve it , and then remove this flag.

Structure of the Palatinate community of Winnweiler