Galicia Germans were settlers of German origin in Galicia in the Habsburg Monarchy from 1774 and in the Second Polish Republic from 1919 to 1939.

First settlement in the Kingdom of Poland

Around 1750, Silesian cloth weavers were settled in Zaleszczyki by Prince Stanisław Poniatowski . 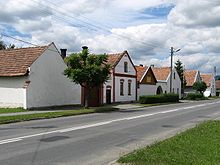 Settlement of the Josephine colonization in Gołkowice Dolne (German Golkowitz)

Immediately after the first partition of Poland, around 1774, the Austrian Empress Maria Theresa had the first craftsmen from the German Empire settle in Lemberg . After the Empress' death in 1780, the actual colonization of the country, named after him, began under Emperor Joseph II .

With the settlement patent from 1781, the conditions for the settlement of farmers and craftsmen from the German Empire were set. This mainly concerned the allocation of the land and the granting of a multi-year tax exemption. The tolerance patent of Joseph II of 1781 made it possible for people of different faiths to settle in Catholic Austria for the first time. This explains the high proportion of Protestant Christians among the settlers in Galicia.

Origin of the settlers

As a result, many people of Protestant refugee origins moved to Galicia from the Palatinate and Baden region after the edict of Fontainebleau was established . Among them were also radical Reformation Mennonites who lived in several settlements near Lemberg in Galicia: initially in three settlements: Einsiedel (18 families), Falkenstein (7 families) and Rosenberg (3 families). Later the settlements were established: Neuhof alias Weissmanówka (1830), Kiernica (1848), Horożanna (1850), Mostki (1854), Wiszenka (1862), Ehrenfeld-Błyszczywody (1864), Trościaniec in the Jaworów district (1870), Dobrowlany (1871 ), Lipowce (1872), Podusilna (1872). In the years 1880–1883, 73 Mennonite families emigrated to North America. In 1909 the Mennonites formed the first and only Mennonite community in Lemberg-Kiernica .

The emperor's recruiters concentrated their efforts particularly on the Palatinate and the Saarland , because this was an area in the German Empire that was particularly impoverished by frequent wars with neighboring France. This explains why most of the farmers and craftsmen who immigrated to Galicia between 1782 and 1785 spoke the Palatinate dialect. Those settlers who came from other parts of the German Empire formed a minority in their new homeland and their dialect was not able to assert themselves in the following generations.

In the emigration movement of the 18th century, the Oberamt Winnweiler , located as an enclave in the Palatinate but belonging to Upper Austria, played a very special role. Many Galician Germans either came directly from the villages of the Oberamt or at least let themselves be recruited there - coming from other areas in the Palatinate. In this context, a special recruiting center for emigrants from Galicia was set up in Winnweiler around 1781.

Most of the people of the Palatinate first moved up the Rhine to Speyer and then between the Black Forest and the Odenwald to Ulm. From Ulm one drove on the Danube in the so-called Ulmer Schachteln to Vienna. The Ulmer Schachteln were cheaply made boats that only went in one direction down the Danube, because they were sold as firewood at the end of their voyage.

From Vienna the journey continued by land. Large groups of horse-drawn carts were taken via Brno , Olomouc , Mährisch Neustadt , Bielitz to Krakow and from there to their destinations.

The settlement lists of the Austrian authorities between 1782 and 1785 show that 3,216 families with 14,669 people moved to Galicia during this period. The establishment of the courtyards for the settlers could not keep up with this onslaught, so that from 1785 the number of resettlers was limited because the people waiting in the camps for their settlement had to be distributed to the courtyards first. This lasted until 1789 and longer. But in 1790 Emperor Joseph II died and the so-called Josephine colonization ended .

From 1790 onwards, Polish landlords also began to be interested in accepting settlers, because they had meanwhile recognized the benefits of German and Bohemian settlers for agriculture. This resulted in a large number of private foundations east of the Josephinian settlement border. Settlers were brought into the country, received jungle for clearing in exchange for a certain fee, and were allowed to use the land obtained in this way as their property for agriculture.

In 1804 a separate Protestant superintendent was formed for Galicia .

Wave of immigration in 1810

After 1810 there was a third wave of smaller immigration from the Catholic Egerland , which resulted in the places Machliniec and Mariahilf , among others . In the period between 1811 and 1848, private landlords increasingly settled farmers and forest workers from Bohemia. After a plague or cholera epidemic in the area around Smorze, the landlord Karl von Seif also promoted settlers in Bohemia in 1835. These new villages got their name from their founder, Karl von Seif, who named the new municipalities Felitzerhal (son Felix), Annaberg (wife Anna), both founded in 1835 and Karlsdorf (Karl) founded in 1838, after his family members and himself.

Emigration to America at the end of the 19th century

Since the end of the 19th century, a total of about 27,000 Galician Germans emigrated to America. As a result, German settlements disappeared, and in other places the Germans became a minority due to the influx of Ukrainians and Poles. German schools and churches had to be closed. For this purpose, more Galicia Germans moved to West Prussia and Posen at the recruitment of the Prussian government.

In 1900 there were around 80,000 German Christians in Galicia. The rest of the information about German-speaking residents in the census (over 212,000) were generally Yiddish-speaking Jews - Yiddish was considered a German dialect in Austria-Hungary and its speakers were counted as German according to established national policy - with the exception of westernmost Galicia, especially Biała Krakowska , where the Jews actually often spoke Standard German.

In the Second Polish Republic

Since 1920 Galicia belonged to the newly founded Second Polish Republic . The situation of the Galician Germans worsened in the following years due to pressure from the Polish authorities. In 1923 the Union of Christian Germans was banned in Galicia . The most important representative of the Galicia Germans remained Superintendent Theodor Zöckler as head of the Evangelical Church A. and HB in Lesser Poland . 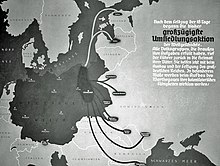 most generous resettlement campaign in world history , propaganda poster for the colonization of the Warthegau

Galicia-German resettlers, Heinrich Himmler on the right , near Przemyśl (1940).

After the occupation of Galicia by Soviet troops, most of the Galician Germans were resettled to the German Reich at the end of 1939.

About 80% of the resettlers from Galicia and Volhynia were brought on the Soviet side in railroad trains to the German border. Camps were set up at the border crossings in order to transport the resettlers who arrived irregularly and without prior notice to the German Reich. In order to prevent the camps from becoming overcrowded at the border of interests, the resettlers were concentrated in reception camps in Łódź , Pabianice , Zgierz and Kalisch and then divided into four (actually five) race evaluation groups. A small part of the resettlers were resettled in the German Reich (race evaluation group IV) and a large part in the area around Łódź. Under the pressure of the circumstances, a total of 54,095 Galician Germans emigrated, most of them settling in the new Reichsgau Wartheland .

In 1946 Pastor Zöckler founded the Aid Committee of the Galician Germans A. u. HB in the Diakonisches Werk der EKD e. V. in Stade. The association granted help to the Galician German refugees if they were in need. “Initially, the tasks were pastoral, material and cultural care of the refugees scattered all over Germany. B. Visiting service, family reunification, help with accommodation, advice on the intention to emigrate, etc. "

Due to the division of Galicia to the present-day countries Poland and Ukraine, the places are shown here according to their current national affiliation.

At the time of the emergence of Galicia there was already a German population in the west, in the vicinity of Biała ( Lipnik , Hałcnów , Komorowice , Wilamowice ). Later some German colonies emerged in the Saybuscher Beskids , especially Żabnica . German minorities also had seineywiec and today's districts of Zabłocie and Sporysz .

Some colonies around Neu Sandez (1797)

The colonies of Sandez were founded in the course of the Josephinian colonization on the estate of Alt Sandez . By 1789, a total of 235 German families had settled in the area of ​​Nowy Sącz. They were usually small and were largely Polonized, especially after 1860, but in 1921 over 500 people in the powiat Nowosądecki reported German nationality (most 124 in Dąbrówka Niemiecka ). The Protestants (in 1921 there were almost 1,400 of them, mostly of German origin) had two parishes in Stadła and Nowy Sącz . A Josephinian colony, based on the Gołkowice Dolne model and with the wooden church from Stadła, was reconstructed in the open-air museum in Falkowa .

The colonies near Salzberg were founded in the course of the Josephine colonization on chamber property of the city of Niepołomice . The Protestants had a parish in Gawłów Nowy (New Gablau) and two Protestant schools (in Gawłów and Bogucicie).

Some colonies around Mielec (1797)

The colonies between the Vistula and the San were founded in the course of the Josephine colonization on manors from Sandomierz and Leżajsk . The colonies around Mielec created the informal colony community Padew . The Protestants had a parish in Raniżów (Ranischau) with a branch in Nowy Kamień (Steinau) . The parish in Sarnów (Reichsheim) was moved to Czermin (Hohenbach) in 1867 . There was also a parish of Swiss descent in Königsberg .

The colonies were founded in the course of Josephine colonization on the Lubaczów estate . The Protestants had a parish in Podlesie (Reichau) .

In the Lubaczów region, now in Ukraine:

The colonies on the Dobromil estate next to Ustrzyki Dolne were comparatively large. The colonists mostly came from the Palatinate . The Protestants had a parish in Bandrów Kolonia (German Bandrow Hochwald) .

In the Dobromyl region, now in Ukraine: 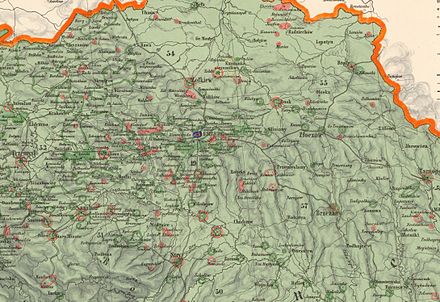 Language islands in the Lemberg area (map from 1855)