Uničov (German Mährisch Neustadt ) is a town with almost 11,500 inhabitants in the Czech administrative district of Okres Olomouc .

The city is located in the historic Moravia region , 22 km northwest of Olomouc ( Olomouc ) on the Oskava , into which the Oslava flows one kilometer above the city , and is 248 m above sea level. 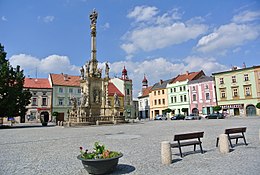 Uničov originated in the early 13th century. It is the oldest community in Moravia that has been granted city rights. Mährisch-Neustadt was granted Magdeburg law in 1223 after ten years of systematic development . As a royal city, it was directly subordinate to the Bohemian king.

After the Tartar storm of 1241, the bishop of Olomouc, Bruno von Schauenburg, as a confidante of the Bohemian King Wenceslaus I, settled large parts of northern Moravia with builders and craftsmen from his northern German homeland, including Mährisch-Neustadt and its surroundings. At that time, German villages were founded here. After the Czech reformer Jan Hus was burned as a heretic in 1415 and his indignant, mostly Czech supporters revolted against King Wenceslas II and the Catholic Church, a bloody civil war broke out. So finally a Hussite army stood in front of the royal city on the day before the Assumption in 1424 and set fire to the suburb. The citizens of the city pleaded for divine help. A young woman named Cordula is said to have vowed that every year she would pull a wax stick the length of the city wall if the city were only saved. When the city was actually spared, believing city dwellers interpreted this as the fulfillment of their request and passed the legend of the vow of the Cordula from generation to generation. Respected bourgeois women, the wax stick women, took on the task of drawing wax sticks.

From 1938 to 1945 Mährisch Neustadt belonged to the district of Sternberg in the Reichsgau Sudetenland , district of Opava , of the German Empire .

From 1941 the wax stick drawing festival was no longer celebrated. Until 1944 it was forbidden by the National Socialist city tour for traffic safety reasons, in 1945 the Red Army took care of it and from 1946 the expulsion of the Germans from Uničov. Since these were primarily settled in Central Hesse, they now celebrated the feast on the Sunday after the Assumption in Limburg in the St. Mary's Church of the Pallottines . There will be an after-party on the following Sunday in Naumburg . In 1956, the city of Limburg sponsored the Germans from Moravia and Neustadt who had been expelled from their homeland. The wax stick festival has also been celebrated by the Catholic community in Uničov since the 2000s.

In 1948 a machine factory was built in Uničov.

The Medel Gate, on the right in the background the parish church

Town houses on the main square, behind which the monastery can be seen