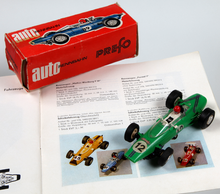 Prefo (from Pre ss fo rmwerk) was a state-owned company of the GDR , which produced tools, molds and toys and was known in particular for model cars , car racing tracks , model tram kits and similar products.

The company was founded in 1928 through the establishment of the Schölz tool factory with headquarters in Dresden . After 1945 the company produced tools and press molds without an owner. The company became VEB Prefo Dresden through nationalization in 1952 .

In 1972, Prefo was assigned to the VEB Model and Plastic Toy Combine Annaberg-Buchholz. This combine consisted of the VEB Blech- und Spielwarenfabrik Dresden, VEB Kunststoff -verarbeitung Zschopau, VEB Spezialprägewerk Annaberg-Buchholz (with the ESPEWE brand) and, from 1974, the VEB Modellbahn Zubehör Glashütte formerly Hruska (with the Permot brand).

As a result of the reprivatisation of the state-owned companies after reunification , the VEB Prefo Dresden became a GmbH under fiduciary supervision in 1990 , which later became part of the Wilken Werkzeug und Formenbau company. Thus the name Prefo disappeared.

In 2003 a new company was founded under the name Prefo with headquarters in Beinstein . Prefo has since been registered as a trademark and is again selling model railroad accessories based on the original model railroad range.