The stump forest is part of the northern Palatinate Forest in the south of Rhineland-Palatinate . The approximately 150 km² area is largely attributable to the Northern Palatinate and extends from west to east on the boundaries of the municipalities of Enkenbach-Alsenborn ( Kaiserslautern district ) and Ramsen ( Donnersbergkreis ). It gave the name to the Stumpfwaldgericht , an old court building, and the museum's Stumpfwaldbahn .

The slightly mountainous forest area , with valley cuts in all directions, has an average height of almost 400  m above sea level. NHN . Of the flowing waters of the stump forest, the upper Eisbach with the Bockbach has the strongest inflow.

Geologically, the stump forest - like most of the Palatinate Uplands - is made up mainly of red sandstone , which formed from windblown desert sand around 250 million years ago (transition from Permian to Triassic) in the former Germanic Basin . Together with the Otterberg Forest bordering on the west (beyond the Alsenz ) , the area is also called the Lower Palatinate Forest by some geoscientists . In the north it descends to the valley of the Pfrimm , which flows into the Rhine near Worms, in the east it borders on the striking Leininger Sporn (516 m), in the south on the Diemersteiner Wald and the upper reaches of the Isenach .

The area is opened up for motor traffic by the state road 395, which leads up the Eisbach from Ramsen to Enkenbach. The Autobahn 6 (Mannheim– Saarbrücken ) runs directly on the southern edge , five to ten kilometers further north is the Autobahn 63 (Kaiserslautern– Mainz ). The Eistalbahn from Grünstadt to Enkenbach-Alsenborn, which originally ran parallel to the state road, was reactivated for the Grünstadt – Eiswoog section after it was closed and is primarily used for excursion traffic.

Documents from the years 765 and 1330 call the area "Stamp" , in the years 1357, 1494 and 1596, however, "Stampf" . The word denoted places in the area where it was necessary to walk with stamping steps because of the steep slopes . In ignorance of the word's origin, it was later changed to the name Stumpfwald .

The lumbering rights of the forest were already established in 1390 in the Stumpfwaldweise . They not only survived the late Middle Ages , but also major changes of rule in the following centuries. After the French Revolution from 1797 onwards it was assigned to the national territory of France , and after Napoleon's final defeat from 1816 to the Kingdom of Bavaria . The rights continue to apply even to this day.

In particular, the residents of the Neunmärker - nine municipalities whose districts are adjacent to the Eisbach one after the other - were allowed to get timber in the stump forest . These were Mertesheim , Grünstadt , Asselheim , Mühlheim , Albsheim , Heidesheim, Colgenstein , Obrigheim and Obersülzen . Other owners of such rights were the residents of Ramsen, Hettenleidelheim , Eisenberg and Stauf , because these communities belonged to the Ramsen monastery and the Stauf rule , which shared ownership of the stump forest. Residents of Wattenheim only had the right to loot if they could call a “ horned cattle ” their own.

The French state, the Kingdom of Bavaria and the Federal Republic of Germany tried again and again in vain to acquire ownership of the stump forest. Most recently in 1989, the special purpose association founded after the Second World War of the communities entitled to the Stumpfwald (Neunmärkerei) won a legal dispute and the state of Rhineland-Palatinate fought for the surrender of forest yields in the amount of 420,000 DM . When the municipality of Wattenheim also demanded its share in this, the Neunmärker first wanted to know whether the forest management with tractors instead of draft animals would even come under the old wisdom . In 1990 a settlement was made that included the Wattenheim residents in the yield, but left the question of draft animals versus tractors open. 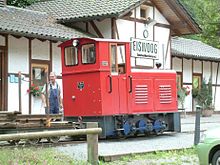