Brian Robert Setzer (* 10. April 1959 in Massapequa , Long Iceland , New York ) is an American rockabilly - musicians , who with the formation of the band Stray Cats in 1979, an important contribution to rockabilly revival or neo Rockabilly wave of the 1980s performed.

Setzer grew up in Massapequa, a small town on New York's Long Island. At the age of eight he started playing the tuba-like instrument euphonium and only discovered his passion for the guitar a little later . In the late 1970s Setzer played in the New York New Wave formation Bloodless Pharaohs and founded the rockabilly trio Brian Setzer and the Tomcats with Leon Drucker ( Lee Rocker ) and James McDonell ( Slim Jim Phantom ) , which later became Stray Cats renamed. In the summer of 1980 the three flew to London to seek their fortune as musicians.

After a multitude of appearances in a wide variety of London clubs, they received their first record deal towards the end of the year and landed a top ten hit with their debut single Runaway Boys . With Rock This Town and Stray Cat Strut , two more placements followed in the top ten of the British charts. The band's debut album also hit the charts.

After the second less successful European album Gonna Ball , the Stray Cats returned to the USA. The US album Built For Speed , a compilation of the first two European albums from 1982, topped the Billboard charts and sold over two million times.

Another successful album Rant N Rave With The Stray Cats - produced again in Europe - followed before the band split up in 1984 and only released their US album Rock Therapy in 1986 for contractual reasons .

In the meantime, Setzer was involved in his solo projects and in 1986 released the mainstream rock album The Knife Feels Like Justice . Another solo album by Setzers followed in 1988, Live Nude Guitars , which was much more oriented towards rockabilly than its predecessor. In the same year there was a reunion of the Stray Cats, which in the following time released four more albums, undertook several tours and finally broke up again in 1994. 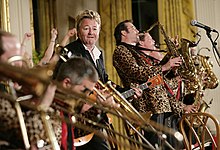 Brian Setzer with his orchestra at a concert at the White House .

Setzer remembered his childhood passion - the big band sound - and founded the "Brian Setzer Orchestra", a big band, which he prefixed with a guitar as a leading instrument and which sounded rockier than the usual big bands. After starting difficulties, two moderately successful albums, the breakthrough came in 1998 with the third album The Dirty Boogie . The album sold over three million copies and also brought Setzer two Grammys . The follow-up album Vavoom! couldn't keep up with its predecessor, but still received another Grammy.

It was only with the Christmas album Boogie Woogie Christmas from 2002 that Setzer was able to build on old successes in the orchestra area. Despite his work with the big band, Setzer remained true to his musical roots and occasionally releases rockabilly albums. So in 2001 ( Ignition ) and 2003 ( Nitro Burnin 'Funny Daddy ). In 2004, for the 25th anniversary of the Stray Cats, the band was reunited, which was followed by an extensive European tour.

In July 2005 Brian Setzer went on a European tour again and released the CD Rockabilly Riot as a tribute to Elvis Presley , Carl Perkins , Johnny Cash and other Sun artists ! Vol.1: A Tribute To Sun Records , with which he entered the German album charts.

In September 2007 the Brian Setzer Orchestra released its first new and regular studio album after seven years, which is entitled Wolfgang's Big Night Out . With this album, Setzer ventures into unknown territory and reworks classics by Mozart, Beethoven, Wagner and others in a swing rockabilly style.

Participation in soundtracks and compilations

[ in square brackets indicate whether as a solo performer (BS Solo), represented with the Brian Setzer Orchestra (BSO) or as Brian Setzer 68 Comeback Special (BS 68 CS) ]