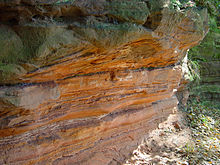 Outcrop with sandstones of the? Middle Buntsandstein in Stadtroda , Thuringia

Inclined stratification in sandstone layers at the foot of the Teufelstisch near Hinterweidenthal , Lower Buntsandstein der Pfalz (Rehberg layers).

The red sandstone is the lower of the three lithostratigraphic groups of the Germanic Triassic . It is superimposed on the Zechstein group and overlaid by the Muschelkalk group.

The name "Buntsandstein" does not refer to a specific type of rock, i.e. not a brightly colored sandstone of any age, but a sequence of rocks from the Lower Triassic , up to several hundred meters thick , made up of sandstones, but also siltstones and claystones as well as sometimes limestone and gypsum rock . In the past, the red sandstone (as well as Muschelkalk and Keuper) was also understood as a unit of time or time interval in the history of the earth and equated with the Lower Triassic (or Middle and Upper Triassic). The red sandstone sedimentation does not begin at the same time in the entire distribution area ( diachrony ). This is one of the reasons why “red sandstone” is unsuitable as an interval for the international geological time scale . The current boundary between the Lower and Middle Triassic , defined by fossils (i.e. biostratigraphically ), does not coincide with the Buntsandstein / Muschelkalk boundary, but lies somewhat deeper, still within the youngest section of the Buntsandstein. Thus, "Buntsandstein" can only be understood today as a name for a sequence of rocks (i.e. for a unit of lithostratigraphy) of the early Triassic age.

Chronostratigraphically, the red sandstone sedimentation begins locally in the youngest Changhsingian , i. H. before the end of the Permian. The transition of the Buntsandstein to Muschelkalksedimentation falls into the lower Anisian , d. H. in the early Middle Triassic. According to the Stratigraphic Table of Germany 2002, this corresponds to the period between 251 and 243 million years ago, i.e. H. a duration of 8 million years.

The rocks of the red sandstone consist mainly of continental deposits such as red conglomerates, sandstones and claystones . The Rötsalinar with several tens of meters in thickness is characteristic of the upper red sandstone in the north German natural gas provinces. These evaporites are evidence of a widespread marine influence. The red sandstone sequence in Central Europe stretches from France ( Alsace ) and Luxembourg ( Gutland ) in the west to Poland and Belarus in the east, and from southern Switzerland to Scandinavia in the north. In the south-west German layered plain , the red sandstone emerges on the eastern flank of the Black Forest and in the eastern Odenwald . In the basin center in southern Lower Saxony and northern Hesse, thicknesses of up to 1000 m are reached.

The formation of the layers of the red sandstone is not the same in the entire distribution area, but varies regionally. In the Lower Buntsandstein of the Palatinate Forest , for example, the Trifels, Rehberg and Schlossberg layers are separated out instead of the Calvörde and Bernburg Formations. The same applies z. B. also for the subdivision of the Solling formation in its area of ​​distribution (see Wesersandstein ).

In Alsace , the red sandstone is divided as follows:

The Vosges sandstone is correlated with the Middle Buntsandstein east of the Rhine. There are no equivalents of the Lower Buntsandstein in northeastern France.

The rocks of the red sandstone, in particular those from the layer of the middle red sandstone, were often used as building material for structures (e.g. churches, castles, bridges) due to their favorable properties (e.g. easy cleavage ). The Freiburg and Strasbourg Minster , the Kaiserdom of Frankfurt / Main, the Heidelberg Castle , the church of the Alpirsbach Monastery , the Basel Minster and the Johannisburg Castle in Aschaffenburg were built using rocks from this lithostratigraphic group.

In some layers of the red sandstone, copper ores are used to a small extent. On Heligoland, for example, these very small chunks were collected and smelted on the beach.

A relatively typical weathering phenomenon in sandstones, the alveolar weathering ( Tafoni ), is particularly pronounced on the walls of the “ red sandstone rocks ” in the Palatinate.

Some of these natural monuments probably served cultic purposes as early as the Neolithic.