The monastery Alpirsbach is a former Benedictine abbey in Alpirsbach , in the style of Romanesque was built. The cloister is in the Gothic style . The monastery was founded on January 16, 1095 by Bishop Gebhard III of Constance . consecrated. 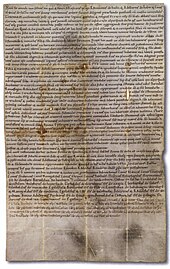 Coat of arms of the monastery

Colored shield of the coat of arms

Closely connected to the Gregorian church reform, monks from St. Blasien first settled in the Black Forest town in 1095 . The nucleus of the monastery was a former Predium , an estate that was probably created during the clearing colonization of the High Middle Ages. The estate stretched from Ehlenbogen in the north to Schenkenzell in the south, from Wolfbachtal in the east to Heimbachtal in the west. Donors were the Counts Alwik von Sulz , Adalbert von Zollern and the noble free Ruodman von Hausen from Neckarhausen, the consecration took place by the Constance Bishop Gebhard on January 16, 1095. The Constance Bishop and the St. Blasier Abbot Uto I granted the monastery Free election of abbots and bailiffs as well as unlimited ownership and administrative rights. The first abbot of the new monastery was Kuno, who came from St. Blasien. The Bishop of Constance inaugurated the first stone oratorio as early as 1099. In 1101 the monastery complex was placed under papal protection by Pope Paschal II , and Emperor Heinrich V confirmed these rights in 1123. In 1128 the large monastery church was consecrated by Bishop Ulrich II of Constance. In the early days of the new monastery, the influence of the Hirsau monastery grew , so that the second and third abbots came from this monastery.

Development of the monastery

In 1293 a rector puerorum and thus a monastery school was mentioned, in 1341 the Franciscan convent in Kniebis Alpirsbach became a priory .

Hereditary bailiwick rights, originally with the Lords of Zollern , finally came to the Counts of Württemberg via the Dukes of Teck and the Dukes of Urslingen . They pushed for the monastery to regain its strength and for the monks to live according to the rules.

The 15th century saw the monastic community in a dispute between the Benedictine reform movements and the reform opponents, which finally led to the fact that the convent was dissolved by 1455 under Abbot Conrad Schenk von Schenkenberg (monk from 1414-1446, abbot 1451). Approx. 20 years later Georg Schwarz became abbot of the monastery. Under him and under the influence of monks from Wiblingen who belonged to the Melker Observanz, the Alpirsbach Abbey joined the Melk Reform in 1471 , albeit against the resistance of the long-established monks.

Abbot Hieronymus Hulzing (1479–1495) led the Benedictine Abbey to the Bursfeld Congregation - as it were as the second founder ( secundus fundator ) (1482). The reform efforts led to a new economic boom in the monastery, which carried out building work on a large scale. The enclosure building was almost completely redesigned and finally the monastery church was refurbished at the end of the 15th century. The Marienkapelle was built at the beginning of the 16th century. 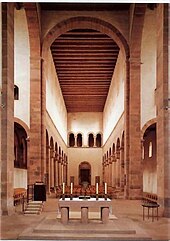 Interior view towards the west

The 16th century brought turmoil, the peasant revolts and finally the introduction of the Reformation in the monastery. During the term of office of Abbot Alexius Borrenfurer , his prior, the later Württemberg reformer Ambrosius Blarer , left the abbey in 1522 . After the re-conquest of his duchy, Duke Ulrich von Württemberg occupied the monastery and reformed it in 1534. The abbot Ulrich Hamma could not oppose him and resigned. In 1535 the duke abolished the Alpirsbach monastery.

During the phase of the Augsburg interim from 1548 to 1555, the church property had to be returned to the Benedictine monks under Abbot Jakob Hochreutiner, who raised the tower by a bell storey with a stepped gable. However , the peace of Augsburg in 1555 meant that the monastery again fell to the Evangelicals. In 1556, Duke Christoph set up a monastery school in Alpirsbach like in the other thirteen male monasteries in the country. However, this was already canceled again in 1595 and merged with the school in Adelberg .

In the course of the Thirty Years' War , as a result of the Edict of Restitution from 1629–1631 and from 1634–1648, monks from the imperial abbey of Ochsenhausen returned to the monastery. In the Peace of Westphalia in 1648, Alpirsbach finally came to the Duchy of Württemberg and, as before, was administered as an independent monastery office. In 1649 the Leutkirche is demolished. The prelate was the legal successor of the Catholic abbot with a seat in the state parliament, he was supported by a monastery administrator. In the years 1807–1811, the church property, which had been administered separately up to this point in time, was transferred to the property of the Kingdom of Württemberg, and the monastery office was incorporated into the Oberamt Oberndorf . Alpirsbach lost its function as court and administrative seat.

Property of the monastery

Floor plan of the monastery church

The founding estate of the monastery was relatively closed around Alpirsbach, little was added in the following period, free float is recognizable around Haigerloch, Oberndorf , Rottweil, Sulz and Nordweil . In 1355 the two villages of Gosheim and Wehingen were acquired by the Reichenau monastery. The land ownership was organized as a manorial lordship, in the late Middle Ages the monastery property was divided into benefices , the abbey was heavily in debt in the second half of the 15th century. The consolidation at the end of the Middle Ages also affected the economic situation.

The legal institute of the Bailiwick corresponded to a high, low and manorial jurisdiction of the monastery . Hereditary monastery bailiffs were the Counts of Zollern, probably the Dukes of Teck from the middle of the 13th century , and probably the Counts of Württemberg from the end of the 14th century. The latter promoted the reform efforts of the monastery in the 15th century, u. a. with the aim of a rural monastic community. State rule and the Reformation brought about the end of the Catholic abbey (1535).

A small monastery as a foundation with a wooden oratory (1095) was soon followed by a small stone church (1099), and finally the completion of the cathedral building in the form of a flat-roofed three-aisled basilica with transept, choir and side choirs (1125–1133), which was consecrated to St. Nicholas in 1130 .

The floor plan of the monastery is based on the Benedictine monastery building scheme and shows the characteristics of the Cluniac reform monasteries, which were conveyed in Germany via Hirsau Monastery . Alpirsbach is an example of the Hirsau construction school .

Characteristic for all buildings of the Cluniac reform : archaic attitude, clear manageability of the floor plans, expansiveness outside and inside, abandonment of the west choir and the crypts , the vault construction and the limitation of the plastic decoration. The model for this was the second columned basilica in Cluny (Cluny II) , consecrated in 981 . By changing the liturgy , the veneration of saints had increased dramatically - every priest had to read a mass every day - and as a result the part of the church reserved for the priesthood had to be expanded. Cluny's basic idea shines through everywhere in the reform churches. The hierarchical order of the convent found visible expression in the design of the monk's church . It was divided into three parts with different meanings for worship:

The east towers were to the east of the transept, flanking the sanctuary (Swabian tradition), which served to coordinate liturgy and bells. The middle apse is semi-circular on the outside; Above the three altar niches - as in Hirsau - a kind of tribune for a fourth altar, in the west a flat-roofed paradise . The unusual height of the church interior corresponds to that at the beginning of the 12th century. incipient increase in proportions in the preliminary phase of the Gothic. Heavy cube capitals indicate the Swabian preference for rough shapes.

The monastery is attached to the church, which faces east-west. The chapter house dates from the 12th century, the cloister and enclosure were built from 1480–1495. In the east is the dormer building with the bedrooms on the upper floor and the work and common rooms of the monks. In the south, the Kalefaktorium and the refectory with kitchen are connected. To the west is the storage area with storage cellars and access to the outside world via the gate.

In the 15th century extensive renovations took place on the east wing of the enclosure. The dorment area was divided into individual elements. The cloister was raised so that cells could also be accommodated on the upper floor. At the same time, a new refectory was created in the south building.

Noteworthy elements of the monastery are the tympanum above the west portal (12th century), the 4 meter high monolith columns in the nave are also a special feature. The column capitals of the eastern columns have heads with ribbon ties or dragon-like beings, which probably symbolize the conflict between heaven and hell. The massive Romanesque pews in the side aisle, a ( turner's work from around 1200), a high altar shrine (approx. 1520) and epitaphs, etc. a. Alpirsbach abbots are further outstanding achievements.

Organ of the monastery church

Organ of the Alpirsbach monastery church

The organ of the monastery church was built in 2008 by the organ builder Claudius Winterhalter . The instrument has 35  registers on three manuals and a pedal . The second manual (solo work) is generated from the main work via alternating loops . The alpine flute in the main work is striking as a horizontal register. The pedal has four extended registers. It is particularly noteworthy that the instrument can be moved inside the church.

The monastery on a painting from 1839

Interior views from Alpirsbach Abbey around 1884

As in the other Württemberg monasteries, the prelates in Alpirsbach were appointed directly by the ducal government. The Duke had issued the Great Church Ordinance for this purpose.

The Alpirsbach monastery is open for tours. It is one of the state's own monuments and is looked after by the “ State Palaces and Gardens of Baden-Württemberg ”. The monastery church is available to the Protestant parish for their services, the Catholic parish uses a hall on the south side as a chapel.