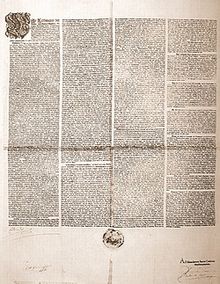 Document of the Edict of Restitution

The edict of restitution was a decree issued by Emperor Ferdinand II on March 6, 1629, with which the status quo of the spiritual possessions in the empire should be brought back to the level of 1552 without the consent of the evangelical imperial estates . It thus enforced the Catholic interpretation of the Augsburg Religious Peace (1555).

The edict of restitution marked the height of imperial power in the Thirty Years' War . In the late 1620s, Protestants in northern Germany suffered devastating defeats against the emperor's troops and the Catholic League . Emperor Ferdinand II wanted to use this situation of Catholic dominance in the empire to permanently strengthen the Catholic denomination.

If adhered to, the edict would have had enormous consequences for property relations within the empire, as it would have resulted in large-scale expropriations and transfers of former Catholic property, including two archbishoprics, seven dioceses and over 500 monasteries. The edict reignited the conflict between the Catholic Emperor and the Protestant princes and estates and contributed to the further escalation of the war.

The Augsburg Religious Peace of 1555 gave the imperial princes the right to determine the denomination of their subjects ( Cuius regio, eius religio - whose territory, whose religion). At the same time, subjects who did not want to accept the denomination of their ruler had the right to emigrate and to settle in another territory of their denomination ( ius emigrandi ). The so-called “spiritual reservation” ( Reservatum ecclesiasticum ), which excluded spiritual territories from the Reformation and prohibited confiscation of church property, was also included. This should secure the property of the Catholic Church from 1552. In order to persuade the Protestant imperial estates to tolerate the spiritual reservation, Ferdinand I passed an additional declaration, the Declaratio Ferdinandea , the evangelical knights and cities in spiritual territories - as an exception to the cuius regio principle - guaranteed freedom of belief.

Despite the spiritual reservation, church property was still extensively secularized after the Peace of Augsburg . It was possible to take legal action against these secularizations before the Reich Chamber of Commerce and the Reichshofrat, but these processes were often very lengthy and costly, so that they were not worthwhile. Numerous north German dioceses have now been administered by Protestant bishops, including the Archdiocese of Magdeburg (with its direct imperial monastery Magdeburg ), the Archdiocese of Bremen (with the Archdiocese of Bremen ), the Prince Diocese of Halberstadt (with the Diocese of Halberstadt ), the Diocese of Lübeck / Lübeck , while the diocese of Meißen / Hochstift Meißen and the diocese of Naumburg-Zeitz were in fact annexed by the Saxon electors.

Even before the Edict of Restitution was issued, Ferdinand II had church property returned in individual cases, around 1626 the Magdeburg Monastery of Our Lady, which was abandoned in 1601, to the Premonstratensian order . In his Habsburg hereditary lands, after the suppression of the class uprising in Bohemia (1618), he carried out the Counter-Reformation by force - in accordance with the cuius regio principle. The Protestant nobility and the Protestant clergy in Bohemia, Austria and Hungary were expelled from the country or forced to change their denominations. The " exiles " had dispersed in large parts of Europe, from imperial cities such as Nuremberg and Augsburg to the electorates of Saxony and Brandenburg, to West and East Prussia, some even to Denmark, Sweden or the Netherlands, some Silesian landowners were in the neighboring Catholic Poland emigrates.

The first part of the edict, the formulation of which goes back to the Prince-Elector Archbishop of Mainz and Imperial Chancellor Georg Friedrich von Greiffenclau , contains a discussion of how the religious peace in Augsburg was meant. It confirms the Catholic interpretation as binding and wrongly declares the Protestant interpretation: the Catholic interpretation of the provisions on imperial mediated spiritual goods, i.e. those areas that were subordinate to a sovereign and not directly to the emperor, is the only correct one and the ecclesiastical reservation is unreservedly legally binding . The authenticity of the Declaratio Ferdinandea is questioned and its claim rejected as invalid, according to which the clergy princes as well as the secular princes have the right to expel people of different faiths from their territory. Furthermore, the supporters of Calvinism are not included in the promise of peace, but only supporters of the Augsburg confession . In the edict of the Emperor all threatened imperial estates that are neither Lutheran nor Catholic or resist the edict that outlawed on.

In the second part, the corresponding consequences are drawn. Should the Protestants insist on their interpretation of the peace, the Reich Chamber Court should pass corresponding judgments against it without further disputation. To make matters worse, most of the interpretations on the Protestant side were declared so clearly incorrect that they did not even have to be tried in a court of law. As a result, all secularizations of church property by the Protestants, which had taken place after the Passau Treaty of 1552, are invalid. The correct interpretation of the law by the emperor only had to be enforced by the executive.

Enforcement of the edict

First, Ferdinand had 500 copies of the edict made secretly in Vienna, which he sent to the district bishops and important princes with the order to publish further copies simultaneously on March 29th. For the whole of the following year efforts were concentrated on enforcing the edict.

The provisions of the edict meant the return of the archbishoprics of Bremen and Magdeburg as well as seven other dioceses and over 500 monasteries. These were mainly in Württemberg, Franconia and Lower Saxony. In the affected Reich circles, imperial commissioners enforced the edict by inspecting the secularized goods, manning them with the help of soldiers and handing them over to Catholic administrators.

The imperial cities , the margraviate of Baden-Durlach and the Duchy of Württemberg , in which 50 monasteries alone were restituted and the duke lost almost half of his territory as a result, were particularly affected . Ernst Egon Graf von Fürstenberg executed the edict of restitution in Franconia and Württemberg .

The Protestants opposed bitter resistance to the edict, especially since they feared that the emperor might issue another edict in which he also restituted the church property, which had been secularized before 1552. Therefore, their public opinion supported the invasion of the Swedish king Gustav II Adolf , who in 1630 started the war against the emperor and the league. The Protestant electors of Saxony and Brandenburg, who were hesitant at first, also joined the King of Sweden.

But the Catholic imperial estates, especially the electors, had reservations about the edict of restitution, as it considerably strengthened the emperor's position of power. So he had handed over two of the formerly Protestant administered imperial direct territories, the Archdiocese of Magdeburg and the Prince Diocese of Halberstadt, to his younger son Leopold Wilhelm . For the first time since the Worms Edict of 1521, an imperial law had been passed without asking the electors for their consent. Regardless of the content-related consent, this appeared to them generally questionable. Accordingly, under the leadership of Maximilian I of Bavaria, at the Regensburg Electoral Congress in 1630 , they forced Emperor Ferdinand II to dismiss his Generalissimo Wallenstein , who was a staunch opponent of the edict but also the emperor's main military tool, and to agree to a review of the edict of restitution . It is noteworthy that Maximilian had only obtained the electoral dignity a few years earlier through the ban of the Palatinate elector Friedrich V and the dismissal of his electoral dignity by Ferdinand II and was by no means an opponent of the edict in terms of content. In the Peace of Prague of 1635, the emperor had to suspend the edict for 40 years.

In the final Peace of Westphalia of 1648, the edict of restitution was repealed and the denomination of 1624 was established as a binding norm.