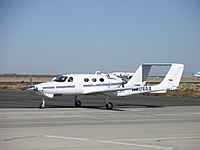 Adam Aircraft Industries, Inc. was an American manufacturer of aircraft based at Centennial Airport in Centennial , Colorado .

The company was founded in January 1998 by Rick Adam. The Adam M-309 was manufactured as a technology carrier by Scaled Composites in 2000 . Production of the prototype of the first commercial model began in June 2001. The largest shareholder was the investment bank Goldman Sachs .

In January 2008 it became known that the company was in financial difficulties and had to lay off employees. It stopped operating on February 11, 2008 and filed for bankruptcy on February 19.

After the bankruptcy, the facilities were first taken over by the Russian "AAI Acquisitions" and then in 2009 by "Triton Aerospace" after its bankruptcy.

Adam Aircraft Industries distinguished itself through the application of the most modern construction methods and the use of carbon fiber reinforced plastics . Known pattern of the company are the twin-engine propeller-driven business jet Adam A500 and twin-engine business jet Adam A700 with jet engines . The production of the two samples is to be resumed in a modified form by "Triton Aerospace".