The Odenwaldkreis is a district in the administrative district of Darmstadt in Hesse . With a little less than 100,000 inhabitants, it is the poorest district in Hesse.

The Odenwaldkreis is the only district that lies with the entire district area in the Odenwald , thus including its core area. The central part of the landscape of the Odenwaldkreis is the Mümlingtal , which runs in a south-north direction, and the mountain ranges accompanying it to the east and west. The largest cities in the district are lined up along the Mümling: Beerfelden, Erbach, Michelstadt, Bad König and Höchst. In the north-west the district extends into part of the Gersprenz lowland and in the south there are some valleys beyond the main watershed of the Main and Neckar , which strive towards the Neckar to the south: the Finkenbach , the Gammelsbach , the Sensbach and the Itter .

The highest elevations in the Odenwald district are the Kohlwald ( 560.4  m above sea level ) northwest of Bullau , the Sensbacher Höhe ( 558  m above sea level ) and the Krähberg ( 555  m above sea level ), both in the Ober-Sensbach area . At 515 meters, Würzberg and Bullau are the two highest villages in the district. The lowest is Hainstadt an der Mümling just before the Bavarian border with 143  m .

The Odenwaldkreis borders clockwise in the north, starting with the districts of Darmstadt-Dieburg (in Hesse), Miltenberg (in Bavaria ), Neckar-Odenwald-Kreis and Rhein-Neckar-Kreis (both in Baden-Württemberg ) and Bergstrasse (again in Hesse) .

In the course of the reform of the district constitution in the Grand Duchy of Hesse based on the Prussian model in 1874, there was also a new district division. The division of the Grand Duchy into seven districts that formed the Starkenburg Province (Bensheim, Darmstadt, Dieburg, Erbach, Groß-Gerau, Heppenheim, Offenbach) lasted for more than six decades.

After the dissolution of the provincial and district assemblies in what is now the People's State of Hesse (from 1918) and the dissolution of the three provinces of Starkenburg, Upper Hesse and Rheinhessen in 1937, the year 1938 brought a review of the district boundaries. On November 1, 1938, a decisive regional reform was carried out in Hesse. One district was dissolved in each of the three Hessian provinces of Starkenburg, Rheinhessen and Upper Hesse. In Starkenburg, the Bensheim district was affected. This was largely added to the Heppenheim district, which also became the legal successor to the Bensheim district. The new administrative unit was renamed the Bergstrasse district. At the same time, the cities of Darmstadt, Gießen, Mainz, Offenbach and Worms became independent as urban districts. This regional division of the people's state initially lasted until the end of the war in 1945.

The Odenwaldkreis has a coat of arms as well as a hoist and banner flag .

The district office building was designed in the Renaissance style from 1902–1904 by the Worms city architect and later professor at the Technical University of Darmstadt, Karl Christian Hofmann (1856–1933) , and built by the building contractor and stonemason Adam Hild from Hetzbach. Extension buildings were necessary in 1960 and 1989.

At this point there was formerly the court of the Erbacher Zent and then a brickworks.

The Odenwaldkreis has a partnership with the Falkirk region , which is located in the center of Scotland between Edinburgh and Glasgow .

12 nature reserves have been designated in the Odenwald district . In addition, there are several Natura 2000 areas (FFH areas and EU bird protection areas), some of which span districts. 69 natural monuments protect striking individual trees or groups of trees, rock formations and small areas. 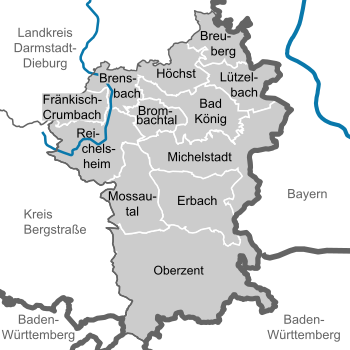 On July 1, 1956, the predecessor of the Odenwaldkreis, the district of Erbach, was assigned the distinguishing mark ERB . This was still used after the name was changed to Odenwaldkreis on August 1, 1972, and is still issued today.

Wikisource: The picturesque and romantic places of the Odenwald in their past and present  - sources and full texts

Portal: Odenwald  - Overview of Wikipedia content on the Odenwald topic