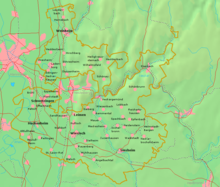 The Rhein-Neckar-Kreis is the most populous district in Baden-Württemberg and the fifth largest in Germany in terms of population . It is located in the northwest of the country in the Karlsruhe administrative district and belongs to the Rhine-Neckar metropolitan region .

The Rhein-Neckar-Kreis is part of the Upper Rhine Plain , the western Kraichgau and the southern Odenwald . The landscape on the western edge of the Odenwald from Wiesloch northwards via Heidelberg and Weinheim to Darmstadt is known as the Bergstrasse , one of the warmest areas in Germany. To the east is the Brunnenregion tourist area . The district borders directly on Hesse and Rhineland-Palatinate ( Brühl (Baden) - Altlußheim / Altrip - Speyer ) and also has an exclave that is only two kilometers from Bavaria ( Badisch-Schöllenbach / Kirchzell -Breitbach).

The Rhein-Neckar-Kreis borders in a clockwise direction in the north, starting with the districts Bergstrasse , Odenwaldkreis (both in Hesse), Neckar-Odenwald-Kreis , Heilbronn and Karlsruhe (all in Baden-Württemberg). In the west, the Rhine forms the border with the federal state of Rhineland-Palatinate with the independent city of Speyer and the Rhein-Pfalz-Kreis , with the exception of the Kollerinsel on the left bank of the Rhine , which belongs to the municipality of Brühl and thus to the Rhein-Neckar-Kreis. Furthermore, the Rhein-Neckar district borders on the urban districts of Mannheim and Heidelberg.

A narrow strip that belongs to Hesse extends into the district from the north to the Neckar . These are the communities of Neckarsteinach and Hirschhorn (Neckar), which are part of the Bergstrasse district, as well as the community-free area of Michelbuch .

The old districts of Heidelberg, Mannheim and Sinsheim go back to the former Baden district offices, which were changed several times in the course of history and were transferred to districts in 1936/1939. At the same time, the urban districts of Heidelberg and Mannheim were created in 1939. Since then, both cities no longer belong to the respective district areas, but remained the seat of the respective district administration until 1972.

After the district reform, Heidelberg became the seat of the new Rhein-Neckar district. After the municipal reform has been completed, this will include 54 municipalities, including 17 cities and of these, in turn, six “ major district cities ” ( Hockenheim , Leimen , Schwetzingen , Sinsheim , Weinheim and Wiesloch ). The largest city is Weinheim, the smallest municipality is Heddesbach. With a total of 54 cities and municipalities , the Rhein-Neckar district is just behind the Alb-Donau district , which has 55 cities and municipalities. In Weinheim, Ladenburg, Neckargemünd, Sinsheim and Wiesloch, in addition to the numerous offices in Heidelberg, there are branch offices of the district office.

The population figures are census results (¹) or official updates from the Baden-Württemberg State Statistical Office. Only main residences were taken into account.

The district council is elected for five years by those entitled to vote in the district. The local elections on May 26, 2019 led to the following preliminary results. The official final result will be announced by the State Statistical Office towards the end of the year.

Main building of the district office in Heidelberg

Results of past district elections

The district administrators of the Rhein-Neckar-Kreis since 1973:

Description : Split: in front in blue a silver wavy bar covered with a wavy black thread; behind in gold a red crowned, red-tongued and red-armed black lion

Significance: The coat of arms takes into account the geographical location and the historical dominance of the district and the formerly independent communities. The divided wave bar symbolizes the Rhine and Neckar , which gave the district its name. The electoral-Palatinate lion symbolizes the former affiliation of the majority of today's district area to the Electorate of Palatinate . The colors of the lion have been swapped compared to the original coat of arms in order to comply with the heraldic color rule .

See also : List of coats of arms in the Rhein-Neckar district

The Rhein-Neckar-Kreis maintains a partnership with the Hungarian Somogy county . 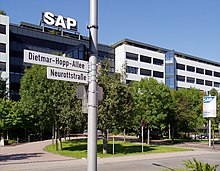 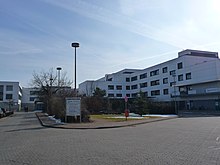 The industrial structure is diverse with numerous companies in the metalworking and chemical industries (e.g. Freudenberg in Weinheim), including numerous medium-sized companies. The service sector is concentrated in the large cities that do not belong to the Rhein-Neckar district, but there are also important companies in the district, such as B. the software company SAP in Walldorf and St. Leon-Rot or the financial services provider MLP and Heidelberger Druckmaschinen in Wiesloch. Agriculture and forestry are also strongly represented in the rural parts of the district. In the Rhine Valley ( St. Leon-Rot , Schwetzingen ) is one of the main areas for growing is asparagus in Germany.

In the future atlas 2016 , the Rhein-Neckar-Kreis was ranked 31st out of 402 rural districts, municipal associations and independent cities in Germany, making it one of the regions with “very high future prospects”.

The federal autobahn 5 Basel - Frankfurt , federal autobahn 61 Venlo - Hockenheim and the federal autobahn 6 Saarbrücken - Mannheim - Nuremberg , which intersect at the Walldorf interchange, run through the district area , several federal highways , including the B 3 , Basel-Frankfurt, the B 39 , the B 37 and B 45 as well as state roads.

In the district area, the network of the S-Bahn RheinNeckar went into operation on December 14, 2003, which opens up the entire Rhine-Neckar area as far as the Palatinate and southern Hesse. The connection to the Karlsruhe Stadtbahn network is to be expanded. The Rhein-Neckar-Verkehr GmbH (RNV), before March 1, 2005 the Upper Rhine Railway (OEG), connects Mannheim , Heidelberg and Weinheim on a circular route . Trams of RNV also drive from Heidelberg to Leimen and Eppelheim . BRN , RNV and SWEG supply the Heidelberg area with a relatively dense bus network.

The Rhein-Neckar-Kreis maintains hospitals, retirement and nursing homes and geriatric rehabilitation clinics. These were previously in the form of a self operation performed. Since January 1, 2006, these facilities have been operated by the “GRN Health Centers Rhein-Neckar non-profit GmbH”. Specifically, these are the district hospitals Eberbach, Schwetzingen, Sinsheim and Weinheim, the district nursing homes Schwetzingen and Weinheim and the geriatric rehabilitation clinic Weinheim. There is also a nursing school at each of the Schwetzingen district hospitals.

On January 1, 1973, the district was assigned the HD distinctive sign , which had been valid for the Heidelberg district since July 1, 1956 . It is still issued today.

Until the 1990s, vehicles from the sub-circles were given special identification numbers: